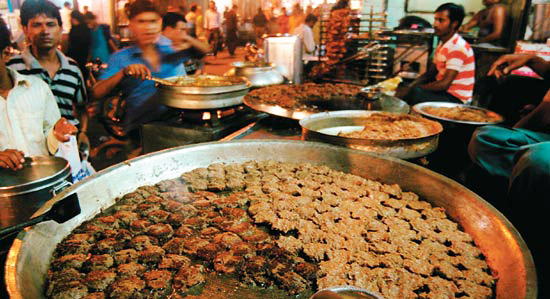 The complex history of the dining habits, etiquette, and preparations of food in Avadh showcases the mingling of civilisations, yet we now live in reactionary times

One of the titles that I brought back from Delhi's impressive World Book Fair is Pigeons of the Domes. This collection of 18 short stories on the theme of communalism is edited by literary historian Rakshanda Jalil. The stories were originally written in Urdu, Hindi and Punjabi.

My reason for picking up this particular volume for myself turns out to be somewhat similar to that of Jalil who says in the introduction that she put the book together in an effort to trace the secular thread in the fabric of modern India.

Since Europe inspires us in so many different ways, it is only fair that we also take lessons from mistakes made in the past on the continent.

After the Nazi Party’s electoral victory in 1932, Germany's democracy, writes Ian Kershaw, leading historian of Adolf Hitler and the Third Reich, in a foreword to George Sylvester Viereck’s interview with Hitler published in the same year in a series titled Great Interviews of the 20th Century, that Germany's democracy that year entered its terminal phase.

This is the month when Lucknow gets blown over by intense memories of Begum Akhtar, who sang love songs like none other. Each October brings with it a bittersweet memory of one of the city’s most illustrious citizens. Begum Akhtar was both born and died in October. She was born in district Faizabad in 1914 and may have died in Ahmedabad in 1974 after singing until 3 am at a concert, but Lucknow is where Begum Akhtar made a home.

She came to live in the city in 1943 and very soon became the toast of the town.

Lucknow is what it is because of all the colourful people who have, over centuries, made this city their home. One of the most amazing citizens of Lucknow was Claude Martin, who died here in September 1800.

I was excited to be in Baroda. This was my first visit to Gujarat. While there, I wanted to check out everything I had heard about Gujarat. Better roads, better markets...well, I’m not so sure. Roads as good as those in Baroda exist in other parts of the country as well. The same goes for markets. What does stand out starkly in comparison to cities in Uttar Pradesh, for example, is the lesser number of people in public places. In Baroda it does feel far from the madding crowds of north Indian cities.

Maharashtra may seem a long way from Lucknow today, but once upon a time the Avadh region shared borders with the Maratha kingdom in Bundelkhand and with other parts of western Uttar Pradesh. And, despite what some Gujaratis and Mumbaikers might say about UPwallahs now, the Mughals and Marathas have enjoyed an age-old relationship and together fought Ahmad Shah Abdali or Ahmad Shah Durrani, the Afghan king.

I have always felt that Lucknow is different. It is only recently that I have become aware of what it means to be born and brought up in Lucknow.

I don’t know about those in Brussels and Paris but many of the refugees I met in Vienna last December long to be back in their country. They might be grateful to be alive and away from the horrors of a civil war raging in their respective countries but they agree that there is no home like one’s place of birth.

Wherever I go in the world, it is often hinted that Muslims are the cause of all problems faced in contemporary times!

Muharram is long over but the memory of that month of the Islamic calendar continues to play on the mind. The mourning rituals witnessed in Lucknow during these months in remembrance of the martyrdom in the seventh century of Husain, grandson of Muhammad, the Prophet of Islam, once again raised questions of rationality in this day and age.