Funny Money, Not so funny

"I will meet you at the station. That way we don't have to search for each other," he tells me in halting English with heavy German accent. As promised, Viktor Parma, the author of a bestselling book on Swiss banks, is waiting for me. It did not take me a moment to find him when I saw him leaning against a hoarding. "Viktor Parma, I presume?" I ask him. His gaunt face turns cheerful. He shakes hands warmly and suggests we go to the café Cote Sud on the top floor of the city station.

It is warm and sunny and Parma is ready to tell Hardnews about his book - written in German - and why he is attracting so much controversy in his own country. Parma slowly pulls out his slim book in bold red and translates the title for me: Rogue State - Switzerland Tax evasions: How the biggest banking state of the world is corrupting itself and destabilising other countries. With a title like that, surely, he would not be loved in his country. "Many people in my country claim that I have betrayed them, but the Germans do not think like this. They are very happy with the book."

Parma has been a journalist for many years. Recently, he quit his job with a widely-circulated tabloid, Sonntags Blick. Along with another business journalist, Werner Ventobel, he went through the history of Swiss banking and demolished many myths about the origin of banking secrecy in his country. Parma began to write his book a few months before the Lehman Brothers collapsed. "As we went along, we realised the magnitude of the crisis and the role of Swiss banks."

Parma traces the rise of bank secrecy to the instability of the Weimar Republic in Germany and how the rich were parking their funds in neighbouring Switzerland, which was a safe haven for all kinds of funds. The big myth, according to Parma, was that the banking secrecy was introduced to help the Jews take their money out of Germany after Adolf Hitler came to power. "This is a very popular lie," tells Parma. The bank secrecy laws were brought in 1934. A violation of secrecy was punishable by a jail sentence. The man who devised the secrecy laws though was a friend of Nazi leader, Heinrich Himmler.

The presence of low tax rates in Switzerland began to weaken its neighbours in the 1930s-40s. France was financially in a bad shape due to large scale tax evasion and the flight of capital from the country. All the rich began to put money in Swiss vaults. According to Parma, the French were financially so weak that they were in no position to resist the Germans. Rest as they say is history. After the war, it was discovered that the Swiss had more than seven billion francs, which was more than half of the Swiss GDP in 1946. The World War II had seen funds streaming from all over the world into Swiss coffers thus giving a new meaning to both its neutrality and bank secrecy.

As the sun is getting hot at cafe Cote Sud, Parma suggests we move to the café opposite the Bundesplatz (Parliament). This short journey, hopping across tramlines and wading through colourful shoppers, is illuminating. The Swiss Parliament and offices of banks like Credit Suisse and UBS are all around a common square showing how they feed on each other's power and influence. We sit at a café in Barenplatz and continue our discussion over more cappuccino and cookies.

Parma explains how the Swiss financial system exercises inordinate influence over Parliament and politics. He reveals that head of the financial market supervisory authority, FINMA, is the chief of UBS. There are other ministers and officials in the government who have worked in Swiss banks in the past.

He also reveals that Swiss banking relied on its embassies and companies for policy-making in other countries. Recently, a high-powered delegation, according to Parma, visited New Delhi, Berlin, Brussels and Beijing to build a case for Swiss banking. Their endeavour was to lobby free flow of capital and attract deposits. This delegation relies on the influence of Swiss companies like UBS, Credit Suisse, Novartis, Nestle and Roche to ensure that they get the benefit of favourable monetary policies. In a subtle way, Parma hints that the investments by these companies in a country like India are linked to how liberal their banking regime is.

Parma is categorical that Swiss banks are destabilising democracies by providing safe havens to big-moneyed tax evaders in poor countries that are forced to raise taxes to fund their development. "High tax rates encourage tax evasion and there is flight of money to Switzerland and other tax havens." He thinks Switzerland should not allow money accumulated through tax evasion from democracies scrounging for cash to fund their development programmes.

He believes that Switzerland is clean as far as criminal money is concerned. In the early 1990s, they introduced the Know Your Customer (KYC) policy. Since then, they have been only receiving money originating from tax evasion. "When the market grew and the capital flows galloped, the Swiss banks left the task of handling dirty money to havens like Isle of Mann and Guernsey etc." He claims that Swiss banks are painstakingly trying to show that their systems are transparent and they are able to identify each of their customers unlike other tax havens.

Which country has the maximum funds in Switzerland? According to Parma, it has to be Germany and that is why they are keener on regulation and transparency of tax havens. Even the head of the private bankers' association corroborates this impression. So, Mr LK Advani, who, ironically, quoted the Wikipedia, did not really have his facts right.

Switzerland is very nervous after the US put pressure on UBS and forced them to reveal the identity of those who had evaded tax. Can India also get the identity of all those who have squirreled their funds in private Swiss vaults? Parma firmly dismisses such suggestions. "The US has a privileged position. It signed a double tax avoidance treaty in 1951. India is also among the 74 countries that signed this treaty. This double tax avoidance treaty is meant to benefit companies that operate between the two countries. Switzerland, by law, has to give information to the US where evidence of dual criminality is visible."

The US did not enforce this treaty, Parma informs, till last year. The Swiss have been forced to act against their own secrecy laws and give details of 352 account holders in UBS. Emboldened, the US also wants details on 52,000 tax evaders. But, the Swiss are unlikely to relent.

Parma says that the Swiss are good at buying time. In the last 80-odd years of banking secrecy that they have enjoyed, they have come under tremendous pressure to return the money that has originated from corruption or kickbacks. "There have been tough discussions with Brazil and Argentina on exchange of information about criminal cases, but the Swiss have not been forthcoming in providing details."

Money of potentates like Mobutu Sese Seko, former President of Congo, and Sani Abacha, Nigeria's military ruler, got a favourable view from the Swiss authorities. Due to legal wrangling, however, the money has not been transferred to their countries. Our Bofors case also got lost in a similar legal maze.

The Swiss government wants to attract tax evasion money but this has not found favour with G20 countries. Under pressure, on March 13 this year, the Swiss government decided to change its policy on transparency and brought it in line with the definition of Organisation for Economic Cooperation and Development (OECD) that removed the distinction between funds from "tax fraud and the like" and tax evasion.

According to Parma, Switzerland would be forced by the international community to change its ways. Besides the crisis engendered by global slowdown, the presence of a democratic government in Washington is shaking up things in Berne. In 1961, US President, John F Kennedy, had mentioned how tax havens like Switzerland were being abused. Parma was recently informed in London by an advisor to US President Barack Obama that the country will follow a proactive policy against tax havens.

Parma feels the concept of holding companies and low tax rates in the Cantons of Switzerland are the reasons for tax evasions. He reveals that top Indian companies like the Tatas and Birlas have the offices of their holding companies at Zug in Switzerland. He reckoned that $160 billion worth of tax is evaded by entities from Third World countries.

After the huge success of the German edition, Parma had woken up to the idea of coming out with an edition in English. "This was for a German audience, but the issue has international ramifications."

Funny Money, Not so funny

Read more stories by Funny Money, Not so funny 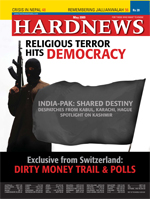