Bugbears and other bugs

I'm a little puzzled about China. In spite of the fact that the country's leaders look wrinkly and ancient, they behave like brats. Either they're children plastering on theatrical greasepaint to look like adults or well, they're not quite all there in the head.

How else can you explain those silly sulks and "You're not my friend, nyaah nyaah nyaah" tantrums when world leaders invite the Dalai Lama for tea with scones/ doughnuts/ samosas? Ah come on, grow up!

I'm still giggling over that much-hyped space mission last year. China's official media reported its spectacular success in glowing terms even before the darn spacecraft took off! This was more side-splittingly hilarious than a Mel Brooks movie, in my opinion. Not very honest, are they? The tragedy is, Chinese citizens are conditioned to believe everything their autocratic leaders say. Or, at least they have to pretend to believe them. After all, jail is not a very nice place to live in. Sad. Really sad.

The truth is, no matter how much Chinese citizens are forced to parrot sickening sycophantic phrases like "Our dear leader", their leaders are not nice human beings. You've got to be a really nasty person to deliberately send fake anti-malaria drugs to a poor African nation with a made-in-India stamp. Let's forget their dirty, filthy, sneaky strategy to discredit India, for the moment. The point I'm making is, what sort of people have no qualms about making sick people sicker? I'm not remotely surprised they don't get as many invitations to tea as the Dalai Lama.

And now, the Beijing website of a Chinese military think tank carries an unsigned article that says India is easy to break up into little pieces. The writer has helpfully provided broad details of how to achieve that. Hmm. Too bad the Chinese are not familiar with English idioms, particularly the one that prissily says, people who live in glass houses shouldn't throw stones. I can give the Chinese government an earful on the subject, but since I have a space constraint, I'll stick to a few words: Uighurs and Tibetans. Deal with that first, dear leaders.

And, now on to another of our cuddly, lovable neighbours: Taliban chief Baitullah Mehsud. It's ironical, isn't it, that this self-avowed non-decadent, not-drinking, non-dancing, non-music listening individual has received the same media bytes as the decadent, drinking, singing and pelvic-thrusting star, Elvis Presley? A new legend is firmly in place now: Mehsud is still in the cave. Some people (US dollar-hungry Pakistanis) staunchly maintain that he's dead. Others (Mehsud's killjoy followers) vociferously insist he's alive. As for me, I don't care. Taliban chiefs are like those critters in movies with creepy names like The Bug. Kill one and another lot surfaces thick and fast to ensure that you stop enjoying your popcorn.

While on the subject of bugs, there's the swine flu pandemic. As I write this, the nation in general and the state of Maharashtra in particular is reeling under waves of panic. I must make it very clear that only 25 per cent of the panic is over the swine flu itself - we're all aware that there is a cure if detected in the early stages. The majority of the panic is over being treated at government hospitals. We're all terribly afraid of government hospitals, no matter what socio-economic bracket we belong to. Take my house-help for example. They entreat me to take them to private doctors when they fall ill. I don't blame them. The general perception is that government hospitals are where patients go in to be treated for one disease and come out (if they ever come out at all) with another.

This inspired me to create a little riddle, which I'd decided to send to Union Health Minister Ghulam Nabi Azad:

Why should swine flu patients only be treated at government hospitals?
Because they resemble pigsties.

Fortunately, Azad saw the light (hallelujah) before I could locate his mailing address, and magnanimously allowed private hospitals to treat swine flu patients, too. I will, however, be sending another little message to our Union health minister shortly: Do something about government hospitals ASAP. And if you can't be bothered, please put a little warning sign on them at the very least - the very same one that's printed on cigarette packs! 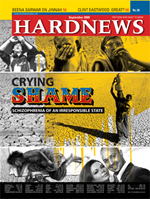