Even before the resolve to somewhat slow down in life was made public, the editors decided that there was no need for this reporter to cover the Copenhagen climate summit, live.

How did they know about the plan to work shorter and to leisure longer, I wonder? By the way, the idea of slowing down lifestyles is inspired by none other than Angela Merkel, German head of State also known as "Climate Chancellor". So, I left the bold and the brave to negotiate global warming in the midst of freezing fairies in the land of Hans Christian Anderson while I was happy to settle into an armchair to listen to Merkel once again make her impassioned plea that we must change our lifestyle to save the planet.

I caught myself smiling warmly as I saw Sunita Narain stand in minus temperatures and complain with chapped lips about the injustice of the way climate negotiations were conducted at Copenhagen to CNN IBN's Bahar Dutt with very unkempt hair and eyes in search of rest. "Sunita and Bahar are the heroes on ground zero, you horror," I chided myself immediately. I was a little surprised at the snowfall of sadism I seemed to have collected this winter on such serious issues, surely from watching a little too much of Cyrus Broacha on the same idiot box lately.

Back to Merkel. It is important to talk about Merkel in the post-Copenhagen context as Germany will host the next interim climate meeting in 2010. The German government is expected to play a central role in the process. Towards the middle of the new year, a ministerial-level climate conference is scheduled in Bonn, home to the UN climate change secretariat. The event is billed as the run-up to a new climate summit in Mexico City to take place a year later.

At the meeting, the watered down and non-binding agreement in hand will hopefully be transformed into a more concrete and legally binding goal for the 192 participating nations. There are great expectations of the Germans. Hopefully, they will continue to look at the disaster that faces the planet a little more honestly under the leadership of Merkel.

For, when it comes to climate change, Merkel does not calculate short-term success over long-term planning. Climate solutions are very close to her heart. She is praised by climate optimists for having tried her best to see that the agreement at Copenhagen was not sacrificed at the altar of national egos. The physicist and former environment minister is so trusted on global warming matters that her Italian counterpart, Prime Minister Silvio Berlusconi, hospitalised with a broken nose asked Merkel to vote for him in Copenhagen.

Meanwhile, the continent continues to mourn Barack Obama's 'miserable' speech in Copenhagen, particularly because Europeans had gone out of their way to show the world how overjoyed they were when Obama was elected president of USA. Environmentally concerned Europeans recall how magnanimously banks were rescued recently from the financial meltdown. The miserliness of the rich at Copenhagen appalls those desperate for funds to save low-lying lands and life from disappearing under the water of rising sea levels. Merkel admits that the compromise reached at Copenhagen did not go far enough. However, she also warns that to go on bad mouthing Copenhagen is to apply brakes on moving on.

Merkel is visibly disappointed and members of the German delegation said that as Europeans they did not wish for what ultimately conspired in Copenhagen. There is dissatisfaction with the Copenhagen Accord brokered by five nations from the rich West, including the United States and four emerging economies of China, India, Brazil and South Africa. The accord is not legally binding and is termed a disaster for the world's poor. Merkel said that China was a major obstacle and expected the emerging super power to be more willing to agree to a binding international agreement.

Dejected she maybe but Merkel now looks upon the much criticised outcome as a step to pave the way for action for a new world climate order and a new start for cooperation between the rich and the poor on climate change.

How come that Merkel relates to the environmental threat faced by us so much more passionately than any other world leader? Perhaps because the German Chancellor is able to foresee that if their homes are not made secure today millions of climate refugees could flock to Germany as asylum seekers in the future. 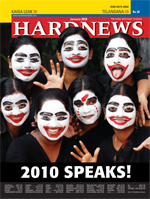