Niyamgiri: Not the Last Battle of the Natives

Editor’s Note: Even as protestors and civil society groups celebrated outside the Vedanta office in London and across India, we reproduce this article on the precious ecological heritage of Niyamgiri and the long struggle to save it.

The Dongria Kandhs in Niyamgiri mountains and Kutia Kandhs on the foothills of this ecological hot spot in Orissa, are fighting a hard battle against a notorious mining giant which is backed by the Indian State. If they lose, it would mean genocide
Subrat Kumar Sahu Niyamgiri (Rayagada)

After eight hours of strenuous trekking through the dense Niyamgiri in Rayagada district in south Orissa, where the aboriginal tribe Dongria Kandhs have been living since ages, we reached Khambesi village. It was already dark and we were tired; we slept in the front room of a Dongria house. The constant coughing of a woman did not let us sleep for a moment. Next morning, I asked an elderly woman, why weren't they taking her to a doctor? She replied, "We have never been inflicted by a disease that we cannot cure ourselves - Niyamgiri provides us with all the medicines we need. This is the first time that no medicine has worked!"

We started climbing the last peak of the Niyamgiri range. The steep slopes intersected with patches of plateau were littered with elephant droppings. At one point, I noticed another kind of animal dropping. A Dongria boy accompanying us, said, "This is a tiger's dropping. So much of hair means the tiger has eaten a wild boar last night."

"Are there tigers in Niyamgiri?!"

"Of course!" Then he quickly added, "The presence of tigers in a forest essentially points to the well-being of the humankind living in it!"

In Gorata village, where we had spent the previous night, the village headman, Dodi Pusika, had told us, "We live in this forest just as the wild boars and tigers do. The forest provides livelihood and shelter to all life forms. When our forefathers came here, ages ago, this forest must have welcomed them. Mind you, a forest does not welcome everyone. Now, after ages, we have become one with the forest, and we are happy. We are there, because the forest is there!"

Yes, a forest does not welcome everyone! Who else would know it better than Anil Agrawal whose Vedanta Resources - a global mining major based in the UK with considerably negative reputation - has set its eyes on the bauxite deposits in Niyamgiri for more than a decade. Despite its massive money power, open patronage by the Orissa government and Union Home Minister P Chidambaram, it has not been able to enter these pristine mountains, due to protracted resistance by the Dongrias!

With a population of about 15,000 spread over 100 villages, the humble Dongrias lead a secluded but 'sustainable' life, away from the insatiable desires of modernity. They consider themselves immensely rich with all the life-supporting resources at hand, and logically so. They regard the mountains as their Niyam Raja - Lord of the Laws - and worship nature as the sole provider, which it is. This is precisely why these forests still remain virgin and dense, while most other forests in the eastern ghats arefast-depleting, burdened under the landlordism of the forest department or devoured by corporate greed.

Even the Centrally Empowered Committee - instituted by the Supreme Court - had strongly recommended against allowing mining in Niyamgiri, citing "immense damage to the ecology and devastation to the tribal population". It clearly says, "Permitting mining in Niyamgiri would amount to sacrilege." The Wildlife Institute of India has also reported that mining Niyamgiri would cause "irrevocable damage" to the existing biodiversity (with rare plant and wildlife species, flora and fauna, medicinal herbs), water resources, and ancient, indigenous communities who live here.

Ironically, when the Orissa government signed the MoU with Vedanta in 1997 for mining in Niyamgiri, the range was being considered as a wildlife sanctuary and an ecological heritage site. Once famous as the chosen habitat of the Royal Bengal Tiger, Niyamgiri today is still home to diverse wildlife: tiger, leopard, elephant, wild boar, sloth bear, striped hyena, pangolin, four-horned antelope, bison, giant squirrel, neelgai, king cobra, python, pit viper, travancore wolf snake, and many more species - most of which are in the 'red list' of the International Union for Conservation of Nature (IUCN) as 'critically endangered'. Just a few years back, a team of herpetologists had found large colonies of Golden Geckos in these forests and mountains - a species believed to have been extinct since the 1970s.

Social scientist Usha Ramanathan, in her report (March 2010) to the Union ministry of environment and forests, as part of an investigating team constituted by the latter, wrote: "A Vaidya Sangh based in Bhubaneswar has identified 112 medicinal plants in Niyamgiri, valuable in the treatment of cancer, diabetes, leprosy, malaria, paralysis, hypertension, among others. Cerebral malaria is endemic in this area, and it is widely acknowledged that the medicine administered by the Dongria Kandhs, which they extract from plants on the hill, is more effective and reliable than any other. (During our visit, at least three non-tribals, including the collector of Kalahandi, admitted to taking tribal medicines as a more certain means of protection from cerebral malaria.)"

Apart from hundreds of perennial streams criss-crossing the entire Niyamgiri range, it is also the origin of two major rivers in Orissa - Vamsadhara and Nagavali. The Vamsadhara originates just below the bauxite encampment in Niyamgiri where mining will ensure the death of the river, which, in turn, will kill the lifeline of thousands of farmers downstream. In fact, the Dongrias categorically understand now that the abundance of water flowing in and from Niyamgiri is due to the very existence of bauxite in its inner core, which sucks and holds rainwater in its porous structure and releases it all through the year, ensuring natural life and sustainability.

Hence, it is commonsense, that if bauxite is taken out, Niyamgiri will turn into a desert in no time. This is as much scientific as ecological evidence available, and even the tribals know this truth too well.

After two difficult but beautiful hours of uphill trek from Khambesi, amidst elephant and tiger droppings in the wild, we reached the top, and there on the foothill of the other side was a stunning site. Out of nowhere in dense wilderness, there stood a sprawling factory bellowing thick dark smoke! That was Vedanta's alumina refinery at Lanjigarh in Kalahandi district, illegally constructed, according to activists, without adequate clearances. The Dongrias in the valley on the other side do not have any idea about the toxic smoke they are made to inhale every moment. So how would they know about medicines for a disease caused by something they do not even know! (Six months later, when I visited Khambesi again, the woman had recovered from the 'strange' disease using traditional medicines provided by their Niyam Raja).

'Mining happiness...' is the tag line of Vedanta's billboards clogging the urban landscape in Orissa, especially Bhubaneswar! Five years back, the entire Lanjigarh area, comprising 25-odd villages inhabited by the Kutia Kandh tribe and Dalits, on the foothills of Niyamgiri, was a serene landscape dominated by sal forests, intersected by the Vamsadhara river. Today, one among the 80-odd MoUs signed by the state government has turned this pristine habitat into an industrial wasteland.

Nearly 15,000 forest-dependent people have become refugees in their own homeland. Large tracts of forests have disappeared to make way for the factory, ash ponds, polluted red-mud ponds, thousands of trucks... and the native forest dwellers, completely self-reliant until a few years ago, rambling about in search of some livelihood option somewhere. In Lanjigarh, as recently as February 2010, I found villagers in Rengopali, next to the toxic red-mud pond built on farmlands snatched from them, were moaning the death of 14 fellow villagers by some 'strange diseases' in recent months.

In Belamba village, we met an old tribal couple. The old woman broke down while narrating to us how the company has orchestrated 'cultural and ecological genocide' of their tribe after destroying their livelihood sources and still got away because "the government is with them". She said, "I am still waiting for my young daughter to come back home... It's been two years now; that day, she had gone to the plant to work, but she has not returned. Do you think they have killed her?"

The old man intervened, wearing a distant look, "If they have killed our daughter, there is no hope.  But if she is alive, she will surely come back someday! Her old father and mother will wait!" Another tribal woman sitting next to her added, "There are many young women who have disappeared from here after the company arrived! Nobody has kept a count! We don't even go to the police... The police are there only for the company!"

Arjun Chandi of Kadamguda village which is close to the refinery, can't help but scream, "How do you call this development? Someone else comes here, destroys your forests, decimates your economic base, pushes you onto the road, and makes lots and lots of money. Where is development? If you want development for us, first give our forests back, and then let's talk about development."

The mountain top from where I located the smoke-belching refinery downhill is where Vedanta hopes to mine bauxite. And the closest Dongria village to the site is Khambesi on the other side. Villagers in Khambesi had told us that there were a couple of powerful blasts on the top some months back (test blasts for mining). "The entire mountain had rocked then. There were cracks in our houses. And wild animals, including snakes, appeared in the village. We heard the roar of tigers and leopards."

After witnessing the devastation around Lanjigarh, the Dongrias are now putting up strong resistance; resolutely deferring Vedanta's 'mining happiness'. For, the Dongrias know it intrinsically what the forests, hills, hundreds of perennial water streams, and wildlife mean to them. How 'development' can spell doom them.

The Niyamgiri mountains are the only home to the Dongria Kandhs, a tribe listed in government records as 'primitive'. Even though a colonial construct, this categorises their life and civilisation as an ancient heritage landmark which needs to be protected and preserved. If they lose the battle, it would mean death of an aboriginal tribe and a precious and ancient ecological hot spot. And with the death of pluralism and democracy, for cold-blooded profit.

The writer is an independent filmmaker based in Delhi

Niyamgiri: Not the Last Battle of the Natives

Editor’s Note: Even as protestors and civil society groups celebrated outside the Vedanta office in London and across India, we reproduce this article on the precious ecological heritage of Niyamgiri and the long struggle to save it

Read more stories by Niyamgiri: Not the Last Battle of the Natives 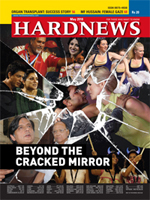