A bizarre, uncanny sense of calm had suddenly descended on the imperial headquarters of the All India Congress Committee in the heart of Lutyen's Delhi on the eve of the Ayodhya verdict. The corridors that usually witness hoards of people wore a deserted look. It's as if the bad faith of nostalgia had arrived once again like a dark irony, along with the dubious ghost of Narasimha Rao: dateline -December 6, 1992.

Rewind back to the recent past, and the place was buzzing with men dressed in crisp white politico uniforms, who had descended upon the grand old building to secure assembly tickets for the Bihar assembly elections. Hurrying through its empty corridors sniffing every new piece of news or gossip that trickled in, journalists made for most of the action in the sprawling compound.

After the three-judge Lucknow bench of the Allahabad High Court declared that the disputed land be equally distributed among the three petitioners, the Congress chose the clichéd maxim as an easy way out: Fools rush in, where angels fear to tread. So it decided to tread cautiously to avoid any multiple political fallouts from the title suit that could prove politically detrimental to its 'fast as a tortoise' revival plans in the Hindi heartland. With Bihar elections and 2012 UP elections on its mind, and several districts in both states touching each other, a wary Congress pleaded that indeed the verdict is neither a victory nor a loss. "Lord Ram was not jubilant at the time of his coronation, nor was he remorseful when he had to go to the forest," said philosopher general secretary Janardan Dwivedi, soon after the verdict.

Since then, an obsessively guarded Congress refrained from making any public comments, clearly to appease both Hindu and Muslim opinion (and the secularists?), and thereby maintained a pusillanimous middle ground. Its official statement after the verdict was a transparent reflection. "Everybody has been waiting for this decision for a long time. This is an extremely important decision and it deals with a sensitive issue. Such a moment comes in the life of a person, society and nation when patience and wisdom are tested. Hence, the Indian National Congress (INC) has been saying this from the beginning and repeating it that either this dispute should be resolved through reconciliation or else it should be left to the judiciary, which, in a democracy, is the most impartial institution. The decision should be acceptable to all," said a stoic Dwivedi.

Five days after the verdict, in an important development, a high-powered Congress Steering Committee discussed the issue at length and welcomed all efforts for a negotiated settlement between the aggrieved parties. The committee recommended that no initiative should be taken by the party to mediate in the controversial issue. "Any sort of reconciliation could get the government embroiled in the convoluted issue that could help the BJP in reviving the mandir cause," said a senior Congress leader.

Steering clear of controversies, the committee noted that the verdict in no way condones the demolition of the Babri Masjid on December 6, 1992 by the Hindutva forces and referred to it as a "shameful and criminal" act. Following the public stance of Union Home Minister P Chidambaram and its 'secular' face, Digvijay Singh, the party condemned the demolition and said yet again that the perpetrators should be brought to justice. This was the first time that Congress had officially condemned the demolition since the Ayodhya verdict. In a consensual statement, the steering committee said, "The INC respects the judicial process with regard to the Ram Janmabhoomi-Babri Masjid title suit. However, we must now await the final decision of the Supreme Court, as and when the appeal is filed."

On the face of it, Digvijay Singh also maintained that in the current context a better judgement was not possible, as it recognises the rights of all the aggrieved parties. "The idols have been placed there. It became an issue that could lead to more dispute if the idols are disturbed. In the present circumstances, there couldn't have been a better judgement," he asserted.

Criticising the comments made by several political leaders, including LK Advani and Mulayam Singh Yadav, the Congress held that any distortion of the verdict by communal forces is detrimental to larger national interests and will harm the nation's prevailing mood and desire for peace and harmony.

Meanwhile, as a simmering undercurrent, the issue of the verdict being based more on faith than on legality rankled senior leaders, especially the ones representing the minority community. Sources told Hardnews that party leaders were clearly divided on the verdict being based on faith rather than evidence based on legality. "My personal view is that sometimes judges rely more on the social order than on the legality of the issue and it should not be looked in a negative framework," said a senior party leader.

However, as soon as the slow, deceptive realism of Muslim disenchantment with the verdict started to surface and trickle in, in an obvious move to woo the miffed community, the Congress changed its stance from welcoming the decision to respecting the judicial process. Said Congress leader Rashid Alvi, "Muslims are unhappy with the verdict. Let the courts decide and the courts are bound to decide in someone's favour. As a lawyer it is beyond my wisdom as to how they dismissed the claim of the Wakf Board. If they have dismissed their claim, why did they give them one-third of the land?"

However, Dwivedi told reporters, "The party would welcome any initiative for a peaceful solution to the problem through negotiations, it would not take any initiative on its own." The ruling party also urged people to wait for the Supreme Court's decision.

Political observers attribute this cautious response to several reasons that has pushed Congress on the backfoot in the Hindi belt for decades, especially since the post-Mandal-Mandir rupture. First, it was in 1949 when the statues were covertly placed inside the Babri Masjid. Jawaharlal Nehru had then asked the authorities in UP to remove the idols and maintain status quo. Side-stepping Nehru's staunchly secular decision, wily, myopic leaders of the party then decided to let the statues remain inside the controversial structure. "It was conveyed to Panditji that any attempt to remove the idols would see a violent backlash in the country," said a senior Congress leader.

Decades later, Rajiv Gandhi's controversial decision to open the gates of the mosque in 1986 to let Hindus pray had polarised the minority community and secular citizens away from the Congress. The decision smacked of soft Hindutva posturings, tacit alignments with the RSS and a betrayal of the mandate based on the Constitution that the Indian State is a secular institution. Another setback to the secular ethos was the stone-laying (shilanayas) ceremony for a Ram temple on November 10, 1989 by Rajiv Gandhi just before the general elections. So much so, that Rajiv Gandhi started his 1989 election campaign from Ayodhya. Failing to garner any sizeable support from the Hindus, much to his dismay, the 'secular' Congress lost the election.

The Muslims in the Hindi heartland had by then been utterly peeved with the opportunistic, short-term goals of party politics. The churning within saw the Congress party's sizeable vote-bank wean away to newer political outfits that promised to safeguard their interests. The final blow to the Congress came on December 6, 1992, when the mosque was brought down by the BJP-RSS-VHP-Bajrang Dal-Shiv Sena combine, proudly led by LK Advani and sundry BJP leaders, while the then prime minister, PV Narasimha Rao, in New Delhi, witnessed the devastation as a mute spectator. The demolition was followed by killings and riots across India. "The BJP is just crazy for power - it has no intention to build the Ram temple. If they were really serious, why didn't they do it when they were in power," asked Alvi.

Meanwhile, Muslims, especially in UP, blamed the Congress for wilfully not preventing the demolition. The party's vote share in the Hindi heartland hit an all-time low, especially in UP which had hitherto decided the fate of the central government and sent the highest number of prime ministers to Delhi.

However, with two successive Lok Sabha election wins and a UPA government in alliance, the party has been successful in garnering a small chunk of Muslim support that eluded it for decades. With the decisive Bihar and UP elections, it is hoping that the Muslim vote-bank might return. Observers state that this is more wishful thinking, because, though the BJP might not benefit, at the ground level the verdict has gone against the Congress.

Aware of the damage caused by the Mandal-Mandir polarisation in the 1990s, the party has been wary of similar polarisations by Hindutva outfits and regional players like Lalu Prasad Yadav, Mulayam Singh Yadav and Ram Vilas Paswan. It's still on a very weak wicket in Bihar, and the unpredictable gains in UP in the last Lok Sabha elections, might not stay for ever. Besides, beyond Amethi and Rai Bareilly, the wind  is not always bringing cheer to the Congress.

Insiders in the party feel that Muslim anxiety against the verdict has not seen any disconcerting manifestations. At the moment, in the comfort of stagnation, all seems well with the Congress, happily cushioned with the trappings of status quo. However, it is still nursing ambitious plans of resurgence in the Hindi heartland. Indeed, this resurgence might not be as rosy, as the party is hoping it to be. That seems to be the writing on the wall. 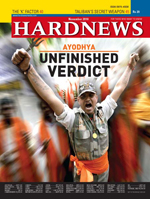