I have never been afraid of flying - not even after evil terrorists turned commercial airplanes into missiles of death and destruction on 9/11. The only thing I fervently pray for every time I'm aboard is that the food doesn't taste like sickening Founder's Day leftovers from a boarding school kitchen. I am saddened to report that god has never answered my prayers. I rather assumed he would when I was once upgraded to fancy First Class, but nope. This is one of the main reasons why I'm a hardened atheist.

However, after it was recently revealed that some of our pilots have fake licences and there's a distinct possibility that many more are guilty too, I am going to have to travel by train instead, or start ringing temple bells and singing devotional hymns with Mirabai-like enthusiasm. The one case that our news channels got absolutely hysterical about concerns a young girl called Garima Passi. Passi attempted to do her pilot training in America and was expelled from Sabeena Training Academy for several disturbing reasons, including the damning allegation that she was scared of flying. She'd also damaged an aircraft while landing on one occasion - her hard-hearted examiners did not excuse this error despite the fact that she didn't do it on purpose and begged for another chance. The expulsion, however, was not good enough reason for her to consider another fabulously lucrative profession like being a bootlegger in the dry state of Gujarat or a DMK politician, for example.

The girl is not a quitter. She returned to India, enrolled in a somewhat obscure training school in Uttarakhand, and a mere five days later, a miracle occurred - she received her licence to kill. I have absolutely no idea if it was delivered by three wise men from the East and whether a very big star was shining brightly in the skies that night. All I know is that her father is Director, Air Safety, Northern Command.
Just a coincidence, of course.

So here are my questions: Did you buy a licence for your daughter because you loved her too much or because you hated her enough to want to see her die a horrible, terrible death in the skies on account of her being an inept pilot?

Place your right hand on the Bhagwad Gita and tell us if you have ever flown in an aircraft while your daughter was in the pilot's seat? The truth please, Sir, and look me in the eye when you answer.

How many of your sworn enemies have you generously given free tickets to when your daughter was in the pilot's seat?

How many offers of marriage has your daughter received after she became a pilot? Do you think she'd have received as many if she were a school teacher?

How come you're brazenly facing TV cameras without a paper bag over your head?

And, finally, do you realise that your daughter could have killed me?

During a recent acrimonious news channel debate, the dashing Captain Gopinath of Air Deccan fame admitted that he was often pressured by powerful people like ministers to hire their relatives/friends as pilots. He also reluctantly confessed (while blushing deeply) that sometimes he had no choice but to give in. Of course, he hastened to add that he ensured that the pilots his airline selected had all their papers in order. Hmm. I wonder, would a nitpicky attitude be possible when he was under the most severe pressure? So yeah, I'm never flying again. I don't know about you, but I suddenly feel kindlier towards evil hijackers and terrorists. At least, they're murdering air-borne passengers for a cause, however warped it may be. Not to earn fat salaries, fatter dowries/wealthier husbands, and party till they die and (worst of all) selfishly take us down with them! 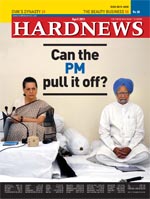