She saw the Partition in Punjab with a child’s epical memory. Conversation with Jamila Gavin, new genre writer of children and  young adult literature 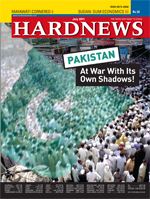