Eighty five years ago, on March 23 1931, Bhagat Singh and his two comrades-in-arms, Rajguru and Sukhdev, made the final walk to the gallows. Barely 23 years old, Bhagat Singh refused to beg for clemency and wrote a hard hitting letter which stated unequivocally "We are prisoners of war, shoot us instead of hanging..... The war will not stop with our killing". Here we reproduce an account of the final days of Jatin Das which succinctly captures the spirit of sacrifice and fearlessness displayed by Bhagat Singh and his comrades. The ideas of Bhagat Singh have never been more relevant than today's time and age where so much jingoism and hyperbole surrounds the idea of nationalism. As Bharatiya Janata Party tries to co-opt Bhagat Singh into its narrative of patriotism, they would do well to study the letter written by Bhagat Singh which clearly stated that religion and nationalism are mutually exclusive.

In India, hunger strike or fast has become a mixed phenomenon. It is used as an effective political weapon to raise the consciousness of the masses, as has been done throughout world history; also, it is being treated as a compulsive media fad, to create sensation and TRP ratings, overshadowing its true spirit  and seriousness.

Incidentally, fast or hunger strike is notIndia’s or Gandhi’s contribution to the world, though it has been often effectively used inIndia. The truth is, the real progenitors of hunger strike as a political weapon were the Irish revolutionaries. It was during 1916-20 that the world’s soul was shaken by the fast unto deaths by Irish revolutionaries. InIndia, this spirit was first imbibed by the revolutionary movement, and only then did the Gandhian movement appropriate it as a weapon to arouse people’s consciousness on burning issues.

In India, Jatindranath Das, popularly known as Jatin Das, sacrificed his life after fasting for 63 days in jail. Bhagat Singh observed a total of more than five months on hunger strike in three of his known/unknown struggles for political rights inside jail from April 8, 1929 to March 23, 1931, the day of his martyrdom. They were inspired by the sacrifices of legendary Irish revolutionaries on hunger strike, particularly Terence MacSwiney’s martyrdom after many days of fast inside jail. Wikipedia gives a glimpse of the extraordinary courage and resilience of the Irish revolutionaries:

“In October 1920, the Lord Mayor of Cork, Terence MacSwiney, died on hunger strike in Brixton prison. Two other Cork Irish Republican Army (IRA) men, Joe Murphy and Michael Fitzgerald, also died on hunger strike in this protest along with Monaghan native, Conor McElvaney, who fasted 79 days before death. The Guinness Book of Records lists the world record in hunger strike (without forced feeding) as 94 days, which was set from August 11 to November 12, 1920 by John and Peter Crowley, Thomas Donovan, Michael Burke, Michael O’Reilly, Christopher Upton, John Power, Joseph Kenny and Seán Hennessy at the prison of Cork. Arthur Griffith called off the strikes after the deaths of MacSwiney, Murphy and Fitzgerald.

“The story of rebel, journalist and poet Bobby Sands, of course, has become a folk narrative across the world with innumerable films, books, songs, recording his brilliant and brave life.Robert Gerard Bobby Sands (March 9, 1954 – May 5, 1981) was an Irish volunteer of the Provisional IRA and elected member of the United Kingdom Parliament who died on hunger strike while imprisoned in HM Prison Maze, Ireland.

“He was the leader of the 1981 hunger strike in which Irish republican prisoners protested against the removal of ‘special category status’ as political prisoners. During his strike he was elected as a member of the United Kingdom Parliament as an Anti H-Block/Armagh political prisoner candidate. His death resulted in a new surge of IRA recruitment and activity.

Bhagat Singh and Batukeshwar Dutt started their first hunger strike from June 15, 1929, when they were transported for life in the Delhi Assembly bomb case and shifted to Mianwali andLahorejails respectively. They decided to start an indefinite hunger strike from the very first day of their arrival in the jails of Punjab when they were not shown the courtesy of being ‘political prisoners’. They were earlier treated with some respect while in a Delhi jail from April 8, 1929 to June 14, 1929.

Jatin Das sacrified his life after fasting for 63 days in jail. Bhagat Singh observed a total of five months fast for political rights inside jail from April 8, 1929 to March 23, 1931, the day of his martydom

Bhagat Singh protested against segregating him from Dutt, since the trial of the Lahore conspiracy case dealing with the killing of Saunders was to begin shortly, in which Bhagat Singh was one of the ‘accused’. He wrote to IG Prisons,Punjab, about this transfer on June 17, 1929. On the same day, he also informed him of being on hunger strike and raised certain demands, including the most important demand for classification as ‘political prisoner’. On June 18, 1929, the superintendent of Mianwali jail sought some clarifications from Bhagat Singh concerning his letter to IG Punjab. Bhagat Singh replied on June 19, 1929. Later, when he was sent toLahorejail where Dutt was incarcerated, they sent a joint letter to the government in this regard. These three letters have historic significance in the context of their relentless struggle for the rights of political prisoners.

The hunger strike, however, still remained unknown to their own comrades lodged in other jails. On July 10, 1929, when all the 16 ‘accused’ arrested, out of 25 named in the FIR, appeared before the magistrate, they were shocked to see Bhagat Singh being brought to the court on a stretcher, since his condition was critical. From July 10, all others accused in this case also joined the hunger strike.

Jatin Das warned his comrades of the intense suffering and torture during hunger strikes. He will not back out of it, even if the others leave, he said. Only he had the experience of hunger strikes since he had been in prison during the non-cooperation movement inCalcutta. And Jatin Das’s warning proved true. Even Sukhdev, like some other revolutionaries, could not sustain it for a very long time; only Bhagat Singh and a few other comrades could continue the fast.

Baba Sohan Singh Bhakna of the Gadar Party, who was going to be released soon, also joined the hunger strike despite his old age. Bhagat Singh’s efforts to dissuade him from not joining the fast failed, and he paid for it by getting his jail remission cancelled, thus spending more time in prison.

This hunger strike is one of the most significant collective actions of political resistance in the history of people’s struggles in the world. The British colonial regime tried its best to break the strike, using oppressive and deceitful tactics. Congress got involved after July 10, 1929 because the media started reporting every day about the abysmal condition of the protestors who were becoming highly popular across India. Jail enquiry committees, jail reform committees etc, were formed, but the government yielded nothing.

At one point, British officials accepted that they would implement some recommendations and Congress leaders assured the revolutionaries that their demands would be accepted. At this assurance, on September 2, 1929, the revolutionaries, except Jatin Das, suspended their fast. Jatin’s terribly damaged physical condition now seemed irretrievable, but he refused to let the colonial regime escape the responsibility of killing him inside jail after so many weeks of the fast.

Since he knew how to resist forced feeding, he resisted the oppressive methods, and had to be finally force-fed with milk. This went into his lungs causing irretrievable damage to his frail body.

Hunger strike is not India's or Gandhi's contribution to the world. The real progenitors of hunger strike as a political weapon were Irish revolutionaries

Bhagat Singh resumed his hunger strike within two days, as British officials refused to release Jatin Das unconditionally — knowing fully well that he was going to die. Jatin’s family too refused to accept the bail conditions offered for his release. However, his younger brother Kiran Chander Das was allowed to be with him in his last days.

When Jatin Das was dying with his head in Bhagat Singh’s lap, with Kiran and all the comrades around, he asked them to sing two songs: Vidrohi kobi (rebel poet) Nazrul Islam’s Vidrohi veer... and Rabindranath Tagore’s Ekla cholo re…All his comrades sang these beautiful, revolutionary songs in his last moments.

Jatin Das died on September 13, 1929 after 63 days of hunger strike. Jinnah made a historic speech in the Central Assembly in support of the hunger-striking revolutionaries on September 12/14, 1929, a day before and a day after the martyrdom, as his speech could not be completed in a single day.

Moreover, Irish hunger-strike martyr Terence MacSwiney’s sister, who was steadfast in expressing solidarity during the hunger protest of Bhagat Singh and Jatin Das, sent a moving message on Jatin Das’s martyrdom. She compared his life, struggle and death to that of her legendary brother.

Bhagat Singh continued his hunger strike till October 4, making a ‘record’ during that phase — a total of 112 days of fast in jail. British officials yielded a bit, but for the implementation of the demands which were agreed, Bhagat Singh had to observe another 15-day hunger strike in February 1930. He resorted to hunger strike again in July-August 1930, against jail rules, and informed the Lahore Special Tribunal, whose proceedings they boycotted throughout the trial. He also informed the Punjab High Court, where he filed a petition against the denial of interviews by jail authorities.

The fact about Bhagat Singh’s third hunger strike in July-August 1930 remained suppressed till now. It was revealed after some of his letters were displayed in an exhibition in Delhi held by the Supreme Court in September 2007.

When Jatin Das was dying with his head in Bhagat Singh's lap, with all the comrades around, he asked them to sing two songs: Nazrul Islam's Vidrohi veer...and Tagore's Ekla cholo re... All his comrades sang these revolutionary songs in his last moments

Despite Bhagat Singh and his comrades’ valiant fight inside jail for securing rights as ‘special category political prisoners’ (similar to the 1981 Irish hunger strike), they were not given this status. After 1947, this right has been not been accepted by different governments in India, despite thousands of opposition members being imprisoned during the Emergency of 1975-77.

Even today several prisoners are rotting in jail on various charges, including false charges, as has been proved in the case of innocent Muslims who were tortured and jailed for crimes and blasts committed by Hindutva terror groups. Even in the Godhra train carnage case, several Muslims were released after spending so many years in prison, charged under the draconian POTA.

In fact, Jawaharlal Nehru spent many months in jail during the freedom struggle — more than even Mahatma Gandhi. Despite Nehru’s strong dislike for British colonial laws like the notorious Indian Sedition Act, Indian Police Act, Indian Penal Code (IPC) and Criminal Procedure Code (CrPC), several British colonial laws are still intact in India, Pakistan and Bangladesh. I wonder why movements like the one launched by Jayaprakash Narayan (JP), or the campaign by Hazare, have never demanded the removal of colonial laws from the statute books of ‘free’ India!

In post-1947 India, Potti Sriramulu, a freedom fighter, gave his life for the creation of Andhra Pradesh in a hunger strike. In Punjab, Darshan Singh Pheruman also died for the creation of the Punjabi Suba — today’sPunjab. Most fasts in contemporaryIndiaend up as farce or blackmail or compromise; they lack the sincerity, spirit and idea of sacrifice displayed by the great Irish revolutionaries, Bhagat Singh, Jatin Das, Mahatma Gandhi, Sriramulu and Pheruman, among others.It’s so starkly transparent that Irom Sharmila’s ten-year-old fast against the Armed Forces Special Powers Act does not appeal to our middle classes and the media in Delhi— because that is against a draconian colonial-type law!

The writer is Professor, Centre for Languages, JNU, Delhi, Visiting Professor, The University of the West Indies, Trinidad &Tobago

On the 85th death anniversary, Hardnews remembers and salutes Bhagat Singh, Sukhdev and Rajguru who were hanged by the British on March 23, 1931 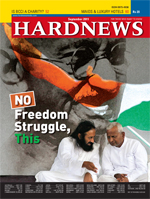