GONE FOR A SIX!

This bouncer by Shoaib Akhtar has flown beyond the ropes. His gimmicks gone for a toss, his controversial book has bombed in India. Here's a take on the slippery story of autobiographies
Sandeep Kumar Delhi

In a career span of 14 years, though Shoaib Akhtar played only 46 Tests and 163 One Day Internationals, his journey was replete with unsavoury controversies, both on and off the field. 'The Rawalpindi Express', as he was called, had a compulsive habit to be in the limelight for all the wrong reasons. No doubt, he was fast and furious with high voltage horse power whenever he ran with the cricket ball in hand, but his fickle time graph was never quite steady. However, when he was at his peak, his super lightening pace, quirky bouncers and eagle motion celebration had tormented the best in the business.

Throughout his career, Shoaib made more enemies than well-wishers, both, inside the faction-ridden Pakistani team as well as outside. Drug scandals and doping charges, chucking, ball tampering, match fixing, and even hitting his own team mate with a bat in a practice session: he inherited serial notoriety. He was accused of all kinds of wrong-doing in cricket. Controversy seemed Shoaib's passion and obsession. Predictably, his autobiography was called Controversially Yours.

He arrived with a bang in the international cricket scenario, but his exit was not on a high note. Unlike most great and genuine fast bowlers, his last days marked the anti-climax of his jaded aura. He didn't even get a farewell match. Indeed, Controversially Yours is not really an autobiography: it is more an outcome of nagging frustrations and repeated disappointments, and a confession box to defend himself in all the controversies that doggedly chased him in his fast bowling career.

In the past 100 years of cricket history, thousands of books have been written on what used to be once eulogised as the 'gentleman's game'. Earlier, most cricket books were generally written in the form of biographies of great players, or about rules and regulations, and new methods to enhance the game. Books were also written on coaching techniques and how to create finer infrastructure.

Beyond a Boundary by CLR James, Mike Brearley's The Art of Captaincy, Harold Gimblett: Tormented Genius of Cricket by David Foot, Famous Cricketers and Cricket Grounds, edited by CW Alcock, Through The Caribbean by Alan Ross, Cricket Highways and Byways by FS Ashley-Cooper, and Bob Woolmer's Art and Science of Cricket were trendsetting books treated with great respect among cricketers, fans and followers. Also, books were written on the golden days of West Indies and the great Australian era.

Many players who made an impact have had a biography written either by a fan, or by a cricket expert or sports journalist. Some players have made the extra effort to pen down striking moments from their professional life. Legends like Viv Richards, Michael Holding, Don Bradman, Geoffrey Boycott, Ian Botham, Imran Khan, Shane Warne, Mansur Ali Khan Pataudi and Sunil Gavaskar, have all written about their protracted steps to success. However, writing a biography was often considered an Englishman's job, with more than half the books written on English cricket and their 'great' players. Most of them were written by players themselves.

So what makes a player retreat and write his life story? An autobiography not only narrates the hidden and expressed graph of an individual's private and public life, but is also considered a healthy and respectable form of lying, self-glorification and self-deception. From a reader's point of view, cricketers often live hypothetical, mythical, 'super-glam' lives. Back in the 1960s and '70s, fans were eternally keen to know what goes on inside dressing rooms and in the personal lives of top cricketers. Those were the days when kids would keep scrap books pasted with cricket moments and pictures of their favourite players, and girls would swoon at the sight of a cricket star. For instance, the entire country rejoiced at the dream-come-true marriage of Nawab Pataudi and actress Sharmila Tagore. The Filmfare cover with both of them happily married was a big hit. In the current scenario, with such disproportionate, relentless, cash-rich, ad-driven media presence, the super-rich cricketer has himself become a fast-track, inaccessible, clichéd commodity, while the super-glam label still sticks.

Usually, a 'normal' autobiography consists of mundane, predictable stuff. There are often rumours about enterprising ghost writers too. The early life and struggle to reach centre stage, the journey from being a faceless rookie to heady stardom, famous victories and sudden downfalls, and finally, the inevitable exit, either on a high note, or after being strategically or brutally sidelined.

Indeed, few have been keen to share their personal lives in the public domain – the ups and downs, the inside, gory, depressing details. And very few, really, have taken on the powerful and prosperous cricket establishment, or even the selectors, famously called "a bunch of jokers" by Mohinder Amarnath. (Ironically, Amarnath is now a national selector.) Indeed, there has been an 'iron curtain' when it comes to putting the BCCI in perspective from within. Some have buttered the right side of the bread and cornered lucrative positions/deals after retirement. Others, however great and dignified, have just disappeared, or opted out of the rat race. Their stories will never be written.

Viv Richard's Sir Vivian, Michael Holding's No Holding Back, Ian Botham's Head On Botham, Imran Khan's All Round View, Bradman's Invincibles by Bradman, Shane Warne's Shane Warne, Pataudi's Tiger's Tale and Gavaskar's Sunny Days are considered among the best in the genre. They were success stories, full of wonderful anecdotes, enjoyed by fans and critics alike.

However, in recent times, the trend has shifted. Authentic, honest, understated narratives gave way to controversial/sensational books, while players began to write their autobiographies during their playing career itself. Herschelle Gibbs's To the Point and Henry Olonga's Blood, Sweat and Treason are two autobiographies that achieved great success. Olonga's book also documented his protest against the dictatorial regime of Robert Mugabe and his 'flight' to England from Zimbabwe. He wrote about his childhood traumas and the struggle which 'nourished' him to become one of the fastest bowlers, and the first
black player to play in Zimbabwe's national team.

To the Point by Gibbs sensationalised the 'sexual encounters' of the controversial player, who was often in trouble for his late night rendezvous and drunken driving charges, besides allegedly leading players to smoke pot during a West Indies series. He also criticised his team mates and senior players like Shaun Pollock, Graeme Smith, Mark Boucher and AB de Villiers. He talked about disunity in the team.

It's often reckoned that players make these allegations in order to sell their books. Adam Gilchirst, ace Australian wicket-keeper batsman, in his True Colours: My Life, chose to highlight certain ugly moments inside and outside his team. His book revolved around the World Cup victories, the successful Ashes tours and other triumphs of the Australian dream team.

Gilchrist's love and hate affiliation with his childhood friend Michael Slater is another vital chapter in his book. Slater had accused him for being the main conspirator when he was dropped from his last Test after announcing retirement. The settlement of this episode created another morbid story. Cricket365.com, a popular website in Australia, made an ugly claim that Slater had allegedly fathered Gilchrist's first son. Gilchrist cleared the air about this and his bond with Slater in his book; later, the website was sued. Besides, Gilchrist dropped a bombshell by calling Tendulkar 'dishonest' and a 'bad sport'. He accused Tendulkar and Harbhajan Singh as well as the Indian cricket board of trying to play down the racism row between Andrew Symonds and Harbhajan during the infamous Sydney Test in 2004. His slanderous remarks on Tendulkar were criticised all over the cricketing world.

Even Greg Chappel in his new book has called Tendulkar mentally fragile. This is a Shoaib-like ploy to sensationalise his book. Considering that Chappel literally presided over the doom of Indian cricket as coach, including India's humiliating debacle in the 2007 World Cup, he really can't find a fan club here. Besides, in Bengal- – for obvious reasons – he is hated.

Similarly, The Breaks are Off, the autobiography of talented off-spinner and 'comic cricketer' Graeme Swann, is making headlines. In the book, he questions the leadership skills of former captain Kevin Pietersen during the Indian series in 2009. The mocking statement of Swann was strongly criticised by Andy Flower, current England team coach, who said that writing about current fellow players is a bad sign. Former England captain Michael Vaughan, who has written about the England team in Time to Declare, also slammed Swann.

As for Controversially Yours, in it Shoaib Akhtar has brazenly justified ball tampering and match fixing as a kind of art form in modern cricket. He admitted to indulging in ball tampering frequently on the field, and claimed that many Australian, English and South African bowlers do it ritualistically. He mentioned ball tampering as a cool way of 'taking care' of the ball, and blamed the subcontinent's arid conditions and barren wickets as the main reason behind this unethical endeavour. Shining and scratches are cool, he said, and demanded the International Cricket Council (ICC) to legalise it. He labelled match fixing a fact of life, and said he was routinely approached for it. Pakistan Cricket Board (PCB) and senior players were not keen to support him, he claimed. Shoaib mocked the PCB for interfering in his personal life and justified his rebellious posturing. PCB Chief Ijaz Bhatt was quick to respond: He said, "Bullshit!"

After blaming almost all his fellow players – Wasim Akram, Inzamam-Ul-Haq, Javed Miandad and Waqar Younis – he went on to claim that Sachin Tendulkar and Rahul Dravid are basically okay players and not big match winners. He also boasted, rather stupidly, that Sachin was shit scared to face his bowling. Sachin responded by saying that it was beneath his dignity to respond to such things.

Predictably, Shoaib Akhtar's book bombed in India. Now, really, you can't bad mouth 'God', and that too in India, and expect people to lap it up. Cheap gimmicks and stunts, they always don't sell. Truly, here's a fitting lesson for all those cricketers dying to write (or get someone to ghost-write) their 'sensational' autobiographies, and then trying to sell it by hook or by crook in a market driven by instant fame and money.

GONE FOR A SIX!

This bouncer by Shoaib Akhtar has flown beyond the ropes. His gimmicks gone for a toss, his controversial book has bombed in India. Here’s a take on the slippery story of autobiographies
Sandeep Kumar Delhi

Read more stories by GONE FOR A SIX! 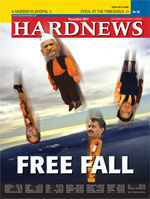