ONE HUNDRED THOUGHTS OF SOLITUDE

The emphasis on 'tellings' as opposed to versions does away with the idea of the original, because it does not privilege any single Ramayana
Aakshi Magazine Delhi

This October, Delhi University's (DU) Academic Council decided, in the course of a single meeting, to remove an essay from a subsidiary paper meant for undergraduate students. Such haste was unusual for the way the university makes syllabi-related decisions. As Mukul Manglik, Associate Professor in History, Ramjas College, DU, explains, "Setting the syllabus is an animated, democratic process taking up years at times, and involving teachers from colleges and university departments, before it is sent up to the Academic Council for final approval."

What was this particular essay and why was it removed in a hurry?

Three Hundred Ramayanas: Five Examples and Three Thoughts on Translation is an essay written by eminent scholar AK Ramanujan, someone whose writing almost everyone who has read him describes as "beautiful" and "well-researched". The essay traces what he terms as the different "tellings" of the Ramayana. The emphasis on "tellings" as opposed to versions does away with the idea of the original – a significant argument because it does not privilege any single Ramayana.

Ramanujan's essay was first published in the early 1990s – a time in India's history when Hindu Rightwing mobilisation was reaching a crescendo, culminating in the demolition of the Babri Masjid in 1992. Today, with the same majoritarian Rightwing sentiment having seeped more and more into institutional structures, this essay has landed at the centre of a controversy. In DU's history itself, three years back, academic SAR Geelani was attacked publicly at a discussion on democracy and fascism that was being held at the Arts Faculty. Those of us who were there saw that the police was there all along, and yet, its presence didn't stop the violence and intimidation.

Ramanujan's essay had been part of a paper titled 'Culture in India: A Historical Perspective'. In the last few years, it has become the persistent focus of petitions from the Shiksha Bachao Andolan Samiti, an organisation affiliated to the RSS, arguing for its removal. As part of a subsidiary paper, this essay would have a wider reach with students from disciplines other than History studying it. And thereby it posed a more serious problem. The RSS mouthpiece, Organiser, has published an article detailing the efforts of RSS activist Dina Nath Batra in this petitioning.

In fact, the Samiti has been active in similar interventions to sanitise school textbooks of facts it considers 'blasphemous' and detrimental to fanatic 'Hindu' interests. Its concerns are always articulated on behalf of the 'Hindu community'. This, as historian Dilip Simeon argued at a public meeting, is a "representational claim" that is part of the Hindu Rightwing's project of building a monolithic, 'one culture, one religion' nation-state. Indeed, a singular 'Hindu community' is non-existent, and in speaking in this language, the Rightwing simultaneously seeks to construct it.

The university's decision gives legitimacy to this idea of religious sentiments getting 'hurt'; it is this which has alarmed the teachers and students. Historian Uma Chakravarty evocatively voiced her concern at a public meeting: "Why is it that some people's sentiments are more sacrosanct than mine. What about my sentiments as someone who believes in rational thought?" Says Manglik: "The Academic Council has made a mockery of the vote, a valuable democratic practice, by instrumentalising it in the service of a deeply unacademic and undemocratic decision."

For many like historian Kumkum Roy, what is at stake here is the preservation of a space for irreverence. She cited an irreverent Bengali telling of the Ramayana at a public meeting, thereby arguing that tradition itself can be critiqued and even lampooned.

The Academic Council's decision hints both at the ideas that people who took this decision obviously hold, as well as their inability to stand up for academic freedom in the face of pressure. One of the members had expressed reservation over the essay being taught by a 'non-Hindu' teacher.

The institutionalisation of these dangerous ideas is also evident in the role of Oxford University Press India (OUP). On being petitioned by the Samiti, it immediately agreed to withdraw the book of which the essay was a part. Why? As Uma Chakravarty argued, "This is about the collusion of corporate capital with Rightwing groups... We are being silenced by people who will not publish us." The fear that these developments evoke is over the seeping in of an intolerant and 'majoritarian' sentiment into academic institutions.

Since the decision, many from the academic community in DU, and in other universities like Jamia Millia Islamia and JNU, have articulated their consistent protest. A series of marches, public meetings and student-faculty discussions have been organised. There have also been some innovative protests, like the one at Ramjas College where an artist interpreted the essay through his drawing, followed by a discussion.

An online petition against the council's decision interprets the essay as showing in "rich detail how Indian culture is constituted of a multiplicity of traditions, how it speaks with many voices". Others explain this as the multiplicity, even 'liberalism', of the 'Hindu tradition'. This is possibly an attempt at reaching out to possible allies who might get alienated if the essay is read as being subversive.

This interpretation of 'Hindu tradition', however, needs to be thought about more rigorously because it seems to talk in the same language that is used by those it is protesting against: that of a singular 'Hinduism', though, in this case, it is defined as plural. A society as differentiated as ours is bound to produce plural narratives, but this in itself need not lead us to argue that 'Hinduism' as a tradition is 'liberal'. Public discussions often tend to be ignorant of how, for instance, those that this tradition discriminates against, would see it. There could be other ways of talking about the essay – perhaps, as Prof Mathias Pandian of JNU said in a meeting, by looking at it through the prism of "caste, gender and nation".

At many of the meetings and marches, often people see themselves as "talking to the converted". This is an unhelpful, even arrogant idea, which should have no space in democratic politics because it closes the possibility of questioning, and of new thought arising from within those seen as agreeing with each other. It was interesting, then, to find that at many places people argued for more self-reflection.

Speaking at Jamia, historian PK Basant framed the question more as a problem of the place of faith within the university. Often, it happens that one's faith (and location) functions in invisible, unconscious ways within the academy. Basant possibly was hinting at this when he gave an example from the days of his involvement in the 'Eklavya textbook project' in Madhya Pradesh. He remembered a time when a group of young historians were thrown off guard when someone pointed out that they had written the part on Hinduism with a degree of questioning and rationality, while the one on Islam unquestioningly narrated its tenets.

This self-reflexiveness was evident at a meeting in DU where Dilip Simeon said that he was not "unfamiliar" with such a history of censoring. Interestingly, he spoke about his involvement in the introduction of the 'Soviet History' paper in the university, which had met with anxieties not just from the Right, but also from those within the Left who didn't want a history that narrated the failures of the movement be told.

Seen from here, the notion of 'Shiksha Bachao' seems to have far deeper roots than only the Rightwing perspective. It can also be seen as a question about letting oneself be colonised by something that is supposed to make us think. A democratic approach, therefore, has to address these difficult questions because they have the exciting possibility of expanding the debate, taking it into newer areas we might not yet know of. The active questioning and debate this decision has sparked of in the universities would not, then, end at just a reinstatement of this essay.

Also see, 'The end of an enchanted universe' by Manisha Sethi, Nov 2008, Hardnews.

ONE HUNDRED THOUGHTS OF SOLITUDE

The emphasis on 'tellings' as opposed to versions does away with the idea of the original, because it does not privilege any single Ramayana
Aakshi Magazine Delhi

Read more stories by ONE HUNDRED THOUGHTS OF SOLITUDE 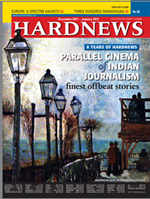