‘India is a good business destination’

Jorge Ayerse Roza de Oliveira had been an advisor to the Portuguese Prime Minister, besides serving as a diplomat at the NATO and on other important assignments for the Portuguese government, before he was appointed the Ambassador to India in February 2011. In this exclusive interview to Hardnews, he talks of his love for India and how both countries can strengthen economic ties in these times of crisis. Excerpts...

Mr Ambassador, you have come to India at a time when Goa is celebrating 50 years of its independence from Portuguese rule. What does Goa mean to Portugal? What are your views on the way liberation of Goa is treated in the writing of Indian history?
History and culture certainly make Goa different to the Portuguese. We need to look at the future. The priorities for Goa are ultimately the same as for the rest of India, in terms of bilateral relations: to increase trade and investment, and to maintain the supply of Portuguese, for a
growing demand in Goa as well as all over the country.

Do you think Portugal's colonial past has come in the way of better bilateral ties between the two countries? Why is it that the British and French, who too had colonies here, leveraged their past for better ties, but not Portugal?
Had Salazar sat down with Nehru to discuss the Portuguese territories, history would have been different, and better. The interests of the Goan population would have been defended, and both Portugal and India would have come out of the ordeal without aggravation or resentment. What happens today is that Portugal and India, albeit with excellent political relations and a common history and culture, are way behind the potential in terms of economic relations.

Although Eurozone is in terrible shape, what is your government doing to tide over the problems?
The Portuguese government sought a bail-out from the European Stability Fund. A triumvirate of European Central Bank, European Commission and International Monetary Fund is now overseeing the implementation of the necessary austerity measures in our budget. The steps we are taking seem to be in the right direction.

But one area which should see great growth is the internationalisation of our economy, both through privatisation, which has already begun, and through increase of our external trade and investment, and here India is well-placed as a destination for Portuguese business.

How do you look at India in the backdrop of what is happening in Europe?
Not in Europe, in the world. The crisis isn't solely European... No one can predict the future, but this time, as opposed to 2008, I believe India will feel more heat. But this moment is an opportunity for the internationalisation of the Portuguese economy, not only for foreign investments in Portugal, but for our own companies, seeking new markets, of which India is and shall be a priority. India should push for more economic reforms, without which it will suffer worse in the times to come.

You have taken pains to learn the Hindi language to get a better sense of India. How has learning the language shaped your views about India?
Learning Hindi not only brought me more into India, it has also taught me some lessons. Isn't it wonderful to have the same word for yesterday and tomorrow? What matters is the present – the only thing we can change. Oh, I didn't take pains to learn the language, it is beautiful and with the grammar is easy...

What does Varanasi mean to you?
There are two places in India that made me want to serve here. My first visit in 2007 took me to Old Delhi one afternoon, and I was hooked. Later I came as a tourist to Varanasi, and I wanted to come back. It is not a city, as someone had said, it is a state of mind. I will certainly go there again. Just to stay there, absorb the views from the ghats, and stay at peace with the river.

‘India is a good business destination’

Read more stories by ‘India is a good business destination’ 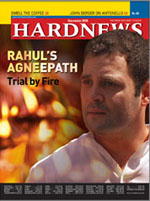