The leap of the Bangla TIGERS

It has been 12 years since Bangladesh secured official Test status. Despite winning a few series and being able to shed the minnow tag, the Tigers still have a long way to go

It was May 31, 1999, and the 29th match of the ICC World Cup was being played between Pakistan and Bangladesh at the County Ground in Northampton. Batting first, Bangladesh set a target of 223 for the Pakistani batsmen. However, at 161 for 9, Pakistan were struggling and the match looked out of their grasp. Batting at number 10, Pakistani fast bowler Shoaib Akhtar pushed the ball to cover and ran for a single. Bangladesh wicketkeeper Khaled Mashud pounced on the ball and made a direct throw on to the stumps. The television umpire was referred to and a red light was shown, resulting in about a thousand spectators bursting onto the cricket pitch. More than that, it marked the arrival of a new combative firepower in the cricket arena. Nicknamed the Bangla Tigers, they made history by defeating Pakistan by 62 runs in their first World Cup appearance.  A new era had begun.

Despite kabaddi being the national game of Bangladesh and football the populace’s first love, cricket has been the game to connect the hearts of Bangladeshi fans. Living in the shadow of Asian cricket giants India and Pakistan for almost 30 years and slowly climbing the stairs since their official foray into international cricket in the 1979 ICC Trophy in England, the Bangla Tigers needed an epic achievement, and their first win against a Test-playing nation (Pakistan) earned them international accolades.

After the win over Pakistan, Aminul Islam, the Bangladesh captain, while addressing the media, had expected prizes for the team from their Prime Minister. But the ICC bestowed a superior reward by granting Bangladesh official Test status. On November 10, 2000, Bangladesh played their inaugural Test match, hosting India in Dhaka.

Though they lost by nine wickets, many historical moments were witnessed in the match. The Bangladeshi batting surpassed all expectations and almost matched the visitors’ in every respect. After posting 400 in the first innings, the Tigers even enjoyed the upper hand in a few sessions, before the visitors’ tail-enders managed a slender 29-run lead.  Islam, who scored 145 in the first innings, became the third person to have scored a century in his team’s first Test. Skipper Naimur Rahman took six wickets for 132 runs, which is still the second best bowling performance in a country’s debut Test.  Besides personal feats, these players laid the foundation for Test cricket’s newest country. They not only became legends but also role models for youngsters as the cricket-crazy nation went on to produce several talented and aggressive players.

The first few years of Test cricket for Bangladesh was more a team-building phase. Under head coach Trevor Chappell, the team failed to make an impressive impact and lost 10 of their first 11 Tests with one (against Zimbabwe) ending in a draw due to bad weather. Things began to move in a positive direction under the next coach, Dav Whatmore. Under him, the team not only savoured its first Test victory against Zimbabwe, but also almost defeated Pakistan in Multan. Chasing an easy target of 262, Pakistan’s star-studded batting line-up was in complete disarray at 162 for seven. However, Inzamam Ul Haq played one of the best innings of his career to score a century and win the Test by one wicket. It was only the 10th time in Test history that a team had lost by a single wicket. In the same year, Bangladesh achieved the feat of playing their 100th ODI and the Tigers went on to make it historic by beating India in the game.

The 2007 ICC World Cup is judged as the turning point in Bangladesh cricket history. In the tournament opener, Bangladesh defeated India, runners-up in the 2003 World Cup, by five wickets. They also beat South Africa in the super eight stage but could not qualify for the semis. After defeating teams like Australia, South Africa, India and Sri Lanka, the Tigers had earned much respect at least in the shorter format of the game.

Under Jamie Siddons, the Bangla Tigers became a veritable headache for other teams in major tournaments. With a giantkiller tag, Bangla’s spin strength and aggressive attitude made things difficult for other teams. The Tigers regularly achieved upsets in big tournaments. Players like Tamim Iqbal and Shakib Al Hasan took centrestage and things definitely became a lot better for the team. In January 2010, they beat England in the second ODI by five runs, completing a win record against all Test-playing nations. They thrashed a star-studded Kiwi line-up 4–0 in their home conditions, their first whitewash of a top-ranked ICC team.

After the win over Pakistan, Aminul Islam, the Bangladesh captain, while addressing the media, had expected prizes for the team from their Prime Minister. But the ICC bestowed a superior reward by granting Bangladesh official Test status

Bangladesh put up a shaky yet radiant show in the ICC World Cup 2011 by defeating England, Ireland, and the Netherlands. However, they lost to South Africa in their last match and could not make it to the knockout phase. Under Stuart Law, Bangladesh defeated India and Sri Lanka to enter the finals of the Asia Cup, their first final appearance in a major tournament. In an electrifying final, the Bangla fans roared with their heroes. However, Pakistan held on to their nerve to beat the host team by two runs.

As anticipated by the fans, the Bangladesh Cricket Board followed in the footsteps of India’s IPL. Sri Lanka and Pakistan were much ahead in targetting a tournament like the IPL, but Bangladesh emerged the winners. Though the tournament failed to put on a supershow, creditably, the board put on a decent show in a short span. Though the BCCI didn’t allow Indian superstars to play in the BPL, players from the West Indies, Sri Lanka and Pakistan had a good time in the tournament. The inaugural season started on February 9, 2012, and six teams participated. The Dhaka Gladiators were crowned champions after defeating the Barisal Burners.

Giantkillers who choke at the end. This is how the experts and their own foreign coaches describe the national team. Former coach Law adds, “There is a lot of talent in Bangladesh. They are a dynamic group who, on their day, are destructive. But, when it doesn’t go for them, they can get hurt badly.” With the under-19 team performing brilliantly on the international stage and a regular band of aggressive players making their presence felt in the senior team, the future is bright for the Tigers.

It has been 12 years since Bangladesh secured official Test status. Despite winning a few series and being able to shed the minnow tag, the Tigers still have a long way to go and the pressure to reach the peak lies on its next generation of cricketers.

The leap of the Bangla TIGERS

It has been 12 years since Bangladesh secured official Test status. Despite winning a few series and being able to shed the minnow tag, the Tigers still have a long way to go
Sandeep Kumar Delhi

Read more stories by The leap of the Bangla TIGERS 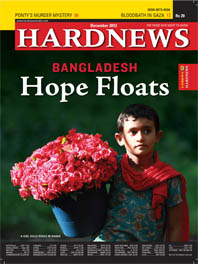