Even as thick-skinned officials and politicians have turned the Indian Olympic Association into a terrible mess, India’s women sports icons have coined a new slogan: Leave sports to players

It could be considered a very significant date in the history of sports in India — although for unfortunate and completely avoidable reasons. For, on December 4, 2012, the International Olympic Committee (IOC) imposed a suspension on the Indian Olympic Association (IOA), an action about which the former had forewarned the latter.

Among the main reasons that had led to the step taken by the IOC were the continued government interference in sports administration in the country, and the manner in which recent elections for the office-bearers of the IOA had been conducted.

So, was the IOC ever aware of all the problems prevalent in the IOA, apart from the highly publicised mismanagement of the Commonwealth Games held in New Delhi in 2010, and the arrest of highly placed individuals like Suresh Kalmadi and Lalit Bhanot? It is important to note that Kalmadi and Bhanot are among those persons who have been associated with the (mal) functioning of the IOA for nearly three decades, despite having no noteworthy connection to sports in the country. In fact, they have contributed to too much of the mess that the IOA is trapped in at present. Besides, did the IOC know about what was actually happening within the IOA, to be able to begin necessary action against the body?

Well, the answer to this question is available with the people behind the ‘Clean Sports India’ movement. A non-profit initiative, set up two years ago, Clean Sports India has been responsible for bringing out the truth of what was going on at the IOA, according to top athletes Ashwini Nachappa and Reeth Abraham. Both Nachappa and Abraham are from Karnataka and have secured medals for India in athletics at international meets. They are among the co-founders of Clean Sports India.

Today, both women take their mission seriously. Shares Abraham, who has won medals for the nation in long jump and 100 metres hurdles at the South Asian Federation Games: “Some of us who were former international and national athletes decided that it was high time we raised our voices and did something constructive to clean up the current state of affairs in the administration of Indian sports. When we made our intentions public, many people thought we were crazy. But we were aware of what we were getting into and are ready to carry the fight forward.” She adds, “Politicians think that everything can be bought with money, but that is not the reality.”

A Joint Convenor of Clean Sports India, Abraham, who is in her late 40s, is based in Bengaluru. She is an independent consultant in the arena of sports and fitness and continues to actively compete in India and abroad in the masters category in track and field events like the half-marathon.

The brainchild of BVP Rao, a former national equestrian athelete, sports administrator and bureaucrat, Clean Sports India was launched on June 23, 2010 (Olympic Day), before the Commonwealth Games in New Delhi. One of its central objectives was to ensure that former sportspersons get to largely manage the Olympic sports federations and other relevant bodies. The elimination of the use of drugs is another of its objectives.

Reveals Nachappa, who is the acting president of Clean Sports India at present, “Our demand is for the creation of a sports code mandating that 25 per cent of office-bearers should be sportspersons, of whom 10 per cent must be women. The government should also monitor the activities of the federations and other bodies to whom it provides funds for the development of sportspersons, establishments and the maintenance of infrastructure and other facilities, as well as the conduct of tournaments and related activities.”

She also wants to speed up the passage of the Sports Bill which former minister of state for sports and youth affairs, Ajay Maken, had set in motion. According to her, the current sports minister, Jitendra Singh, has also shown determination to change things and she is hopeful of something positive taking place in the days to come.

Nachappa, in her mid-40s, was thrust into the limelight when she outran the legendary PT Usha at more than one major tournament and later bagged medals at the Asian Games and Asian Track and Field Championship. Originally from Coorg (Kodagu) district of Karnataka, the Bengaluru-based Nachappa now runs a school with a curriculum that combines academic education with sports. She is also involved in the development and promotion of sporting contests. She believes in focusing on small towns and rural areas where, according to her, there is a considerable pool of talented youngsters with the potential to perform successfully in the national and international sports arena.

Abraham and Nachappa hope that more Indian sportspersons will join the Clean Sports India initiative since most of them have seen for themselves the manner in which the IOA and other sports federations at the national and state level operate. Says Nachappa, “Clean Sports India has around a thousand members now.
We also need the support of other people, whether they are media personnel, legal professionals, anti-corruption campaigners — or just fans of Indian sport.”

Abraham and Nachappa retired from competitive sports more than a decade ago but they believe that the situation has sharply declined since then, especially with respect to the negative and dominant attitudes of officials. Abraham puts it this way, “We believe that the scenario has become worse. Even during our prime, we had the courage to tell people like Bhanot to take us seriously and treat us with dignity. Many of today’s athletes do not seem to be doing this. We were passionate but did not have too many expectations and were not there to make money. Although we were competitors, we were friends off the field. But now, there is not much camaraderie between the athletes.”

Abraham argues strongly for restricting to two the number of terms an official can serve, in line with international norms. She also advocates the age limit of 70 for officials. “Most posts are honorary and carry no accountability,” she observes.

So what’s next on their agenda? Reveals Nachappa, “We are writing to political parties asking for their backing for this campaign. After all, a number of officials belong to one political party or the other.” She believes that the steps taken by the IOC could prove to be good for the future of sport in India.

The other concern is the rise in the use of drugs in sport. Both women reiterated a well-known fact, that performance-enhancing medication is given to competing athletes by the coaches themselves. It is a vicious circle: Sports associations of different states pressurise their athletes to obtain medals; and sportspersons, many of whom come from financially challenged backgrounds, cannot resist the pressure because they tend to enter sports with the aim of getting jobs and benefits in the future.

Tragically, there is very little thinking on how to improve conditions for these athletes. Remarks Abraham, “With disorganised meets, bad accommodation, poor food, shoddy facilities and infrastructure in even places like the National Institute of Sports at Patiala, neither the children nor their parents see too many opportunities in sports for their kids, even if they are talented.”

Nachappa believes that only when sports administrators are held accountable will the scenario change. “The greatest fear that the Indian sports authorities have is of athletes uniting to expose their misdeeds. We have managed to do this to some extent and we will go the whole distance, even while requesting all stakeholders to resolve the present crisis satisfactorily.”

All communication exchanged between Clean Sports India and the IOC is available on the movement’s website: cleansportsindia.org

Even as thick-skinned officials and politicians have turned the Indian Olympic Association into a terrible mess, India’s women sports icons have coined a new slogan: Leave sports to players
Pushpa Achanta Bengaluru 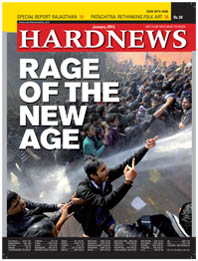