The year 2012 was marked by 78 tiger killings across India — the highest in 10 years.  Indeed, we will soon be saying, “Once upon a time, there were tigers... The animals, the worship, the ancient cults, the conservation efforts, the tiger films and photography industry, as well as the trade in hides, organs, claws, teeth, bones, skin, and gaping maws on museum walls: all of this will wind up. The Royal Bengal Tiger story will soon draw to a close, gone will be the animals, and gone will be the humans, mostly indigenous peoples (adivasis) and a few naturalists who know anything about them. Give tigers another 20 years. Give those humans another 50. Tigers, adivasi stories of tigers, and films and research data on tigers will be frozen in the Internet, for as long as the Internet thrives; give those another 100 years.

The writing of this piece began at the height of a tiger furore in Wayanad — a small, rapidly-changing, forested district in Kerala where I live. I heard about a frenzied mob gloating over a tiger’s murder in broad daylight. It began when I heard desperation in the voices of friends who had been fighting for forests, tigers and every wild and indigenous being in this area. It began with insights gleaned from two adivasi friends, who had different interpretations of the murderous incident. I figured that it was all part of a land scam fuelled by a rumour that a Tiger Reserve was to be declared which would restrict the wheeling and dealing in land that’s become the rage in my district, now a world destination for tourists. I started writing to peer through the stories to the undercurrents: of hope and false hope, of deceit and truth-telling, of fanfare and reality checks, of denial and acceptance within our culture and, through these, to examine our culture’s real effect on tigers.

I called it ‘The Tiger Games’ (after The Hunger Games: the best-selling trilogy by Suzanne Collins) because I believe the last wild places are like arenas, where animals, plants, land, adivasis and farmers (all those belonging to traditional communities of numerous cohabiting species), are pitted against each other in a desperately worsening situation, pressed in on all sides by rapid forces of urbanisation, and
the relentless drive of extractive industrial corporations.

I wrote ‘The Tiger Games’ remembering a handsome young tiger I met once in a forest not far from my home, a tiger whose beauty is imprinted forever on my heart. We were both walking. I offer this to him.

Give tigers another 20 years. Give humans another 50. Tigers, adivasi stories of tigers, and films and research data on tigers will be frozen in the Internet, for as long as the Internet thrives; give those another 100 years

If any of the following apply to you:

If you wonder why there are only as many tigers as there were 40 years ago when Project Tiger was initiated, despite the largest systematic global attempt to save a single species;

If you fear tigers are doomed despite all the efforts on earth to protect them and that 800, 1,400, or 1,700 Bengal tigers (numbers wildly flung around by various expert opinions) are too close to no tigers at all; when 40,000 tigers walked the subcontinent in 1900;

If you love tigers and have met them on their terms and not your own, and you were neither armed, nor in a vehicle, and in fact, you were just surprised, pleasantly so, for you had the chance, the fleeting chance to say hello, as neighbours would, to each other;

If you are enraged by the complacency of urban tourists in viewing, photographing and framing the tiger, irrespective of whether tigers thrive or not;

If you are aghast by how privileged Indians steal credit for “coexistence between tigers and humans in India” from adivasi and traditional rural communities who face the same future as tigers;

If you’ve analysed all the tiger data you can lay your hands on, read all the media reports on tigers and their fate, and you know that the fight for the tiger, or against the tiger, is really a fight for (or against) territory, for control of land as mining potential and land as money;

If you know with furious and damning clarity that a big squeeze is on at breakneck speed in the jungles and rural hinterlands of the developing world, in one way or another, overt or covert, but always armed by the militaries of Super States, and that these will ensure the end of tigers and other wild and indigenous beings;

If you believe that the impact of 1.2 billion humans on 1,400 tigers (population explosion of one species and genocide of the other) is not as serious a cause as the increasingly unlawful appropriation of vast tracts of land and vast amounts of resources by a few;

If you are aware that time is running out for every species on earth, including humans, at the rate of 200 species a day, and over 50,000 a year, and that the extinction of tigers is but a prelude to your own species’ doom;

Then, surely, at the very least, you will have pledged your own body to the land, or at the very, very, very least, endorsed one or more of the plethora of tiger conservation initiatives (three million results on Google).

And then again, if any of the following apply to you:

If you believe camera traps, DNA studies, radio collars, transects, grids, graphs, statistical analyses and zillions of research papers will solve the tiger problem, and that more data are needed in order to save the tiger;

If you believe that wildlife tourism, wildlife photography and tiger films will save tigers;

If you believe the Indian Forest Department can save tigers (one state department alone employs 10,000 personnel, multiply that by, say, 10 Indian states: you get 100,000 men protecting some 1,400 tigers);

If you believe captive breeding of tigers will mitigate the killing of wild tigers;

If you believe declaring a United Nation’s Year of Tigers will save tigers;

If you believe that signing a Greenpeace online campaign will save tigers;

If you believe that the World Wide Fund for Nature, the governments of India and China, or the World Bank, or a Copenhagen summit on tigers will save tigers;

Then, have you not wondered why there are so few tigers left? The above have had sufficient time to prove themselves. What is the outcome? Are their efforts commensurate with the scale of the problem? Considering the well-known fact that “tigers breed easily”, are there significantly more tigers today for all this effort, and will there assuredly be more tigers in 10 years?  If not, why not?  More important, what else needs to be done?

But, if any of the following apply to you:

If you think tigers are doomed and that’s okay, and that the money spent on these animals is better spent elsewhere;

If you think that species come and species go, and that the time for tigers is up, and that “survival of the fittest” is your credo, and tigers are simply not fit enough anymore;

If you believe that economics does not require ecology;

If you want tigers out so you can get coal out;

If you believe your sex life benefits from the crushed bones of a tiger;

If you are willing to pay $20,000 dollars for a tiger skin, as you would for a car or any other object of desire;

If you believe in your entitlement to pry into the lives of tigers at a time of your convenience, and especially because you’ve paid;

If you believe that ancient human communities are backward, and that progress is more desirable than a
living planet;

If you think that you, your children and grandchildren can live without breathable air, potable water and poison-free food, without any consequence to your health, and that these have nothing to do with natural habitats, nor tigers;

If you think nature is overrated, and has no purpose or meaning in real life, and that tigers are irrelevant to your life;

If you believe that humans can go to the moon when space runs out on earth;

Then let me politely bid goodbye to you here, your time is better spent elsewhere.

If you think that you, your children and grandchildren can live without breathable air, potable water and poison-free food, without any consequence to your health, and that these have nothing to do with natural habitats, nor tigers… Then let me politely bid goodbye to you here, your time is better spent elsewhere

Can we unhook ourselves from the naïve and myopic view that tigers, the rest of the natural world, and the health and well-being of our own selves, families and communities are all fine because somebody else is taking care of them? Can we open our eyes and see that we have outsourced conservation work to a handful of specialists, beleaguered State personnel, ineffective legislation, a smattering of lawyers and activists and absurd token campaigns, and that these cannot dent the relentless assault on land, forests, wetlands, aquifers, rivers, water bodies, oceans, biodiversity and climate? Although a great number of conservation endeavours are well-intentioned, and by no means illegitimate, with some positive results on very local scales, they are simply not working fast enough, effectively enough.

But, what is conservation? How does this manifest in our daily lives? It is nothing more nor less than a deep and abiding responsibility, individual and collective, for a whole and healthy world, for the well-being of all, for all our human and non-human diversity.

Adivasi people don’t outsource the protection of their forests to others. Why do the rest of us?

Will tigers live to see the end of the 21st century? Will the forests of India? Will the natural world? Will
Indian cultures?

When we see that our efforts are incommensurate with the scale of the problem, when we truly recognise failure, we are then free to come up with creative new actions. Can we all include tigers in our resolutions
for 2013?

The writer is a restoration ecologist and environmental educator. She won the Whitley Award, the UK’s top prize for conservation, in 2006. She is a member of the Save the Western Ghats movement. 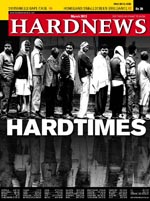