Rajiv Rajendra’s second novel on cricket, The League, is all about inexcusable incidents which the most popular game in the subcontinent has witnessed. From betting to spot/match-fixing, from money laundering to murder mystery, The League has it all. No wonder, the book spins and spoofs the Indian Premier League (IPL): the hyped, sleazy, multi-billion cricket league run by the stunningly unaccountable, super, super rich Board of Control for Cricket in India (BCCI).

Owned by rich Arab sheikh Prince Abdel Rafter al Rafter, ‘the league’ is headquartered on an exotic island called Palmyra in the Arabian Sea. The strict terms and conditions of the tournament sound like the B-grade dialogue of a Bollywood villain. No communication with the outside world — only through phones and email. The key to the exit from the island lies with the mighty sheikh. Into its fourth season, the big ticket hit-hit, bang-bang glamour show has seven listed teams, undoubtedly owned by miscellaneous fat cats, international mafia and drug dealers, and, yes, there is a Bollywood connection too. One team is owned by a Bollywood star Jahan Panah Khan.

For the players, the motive is clear. If you are in, you have to play on the terms of the sheikh and his sidekick, ‘Spike Shirazy’. The players have to fix matches. If they refuse, either they or their families will have to pay a heavy price. In return, the players are bestowed tons of cash and other beneficiary luxuries. Cocaine, heroin and other drugs are free; also free
are the ‘services’ of models, cheerleaders, etcetera.

The story revolves around Tarun Krishnan, a retired international cricketer from India, who, throughout his career, opposes the league and also advises young players not to fall into this vicious trap. He is approached by CBI chief Anshuman Khare and is asked to help in collecting evidence against the match-fixing saga on the island. Krishnan makes an entry into the league only to get trapped.

Things turn ugly, leading to the murder of Khare and Natasha Malhotra, Krishnan’s secretary. With the help of Sunny Khare, his son, who is a young intern at Interpol equipped with hi-tech gadgets and gizmos, and Aditi Rao, chief anchor and CEO of IN Front, one of India’s biggest 24x7 channels, and backed by the finance ministry, Krishnan finally wins this zigzag game, thus finishing the dubious empire of the prince.

Prince Rafter is cocky and mysterious. He lives in a huge, castle -like mansion, has a personal satellite and engineers who can track and hack any software and computer database under the sky, making them superior even to Chinese engineers. He makes visual appearances directly in the locker room of the players. There is a striking resemblance to UAE billionaire Abdul Rahman Bukhatir who started the lucrative international cricket phenomenon in Sharjah. Even the Rafter stadium is located on the Arabian Sea, a short flight from Dubai. The prince calls the shots and controls tycoons who spend millions to buy cricket teams to make huge amounts of money, often through dubious channels. He is at once a mafia king, drug dealer, an underworld don, and a sinister terror, who can make or unmake with a single pull of his trigger.

The murder of David Richards, chief coach of Violet Superheroes, resembles the death of Bob Woolmer. Mohammad Iqbal, who runs and takes shelter in an asylum, reminds one of Zulqarnain Haider, Pakistan wicketkeeper, who fled the team hotel during the England tour of 2010. And upcoming, talented, boorish or arrogant cricketers, loaded with filthy cash and sudden fame, and partying with cheerleaders/starlets/aspiring models — it all sounds too familiar. The celebration of immorality in the times of IPL is a camouflaged narrative which weaves through the book.

The League is a good read. The storyline is simple. It does not fall off the track. In the hands of a box office smart cookie, this is underbelly stuff which could make a rocking tell-all sleaze movie. 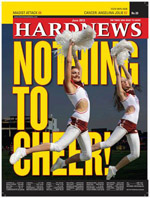