Activist Teesta Setalvad, who runs Citizens for Justice and Peace in Mumbai, sent an SOS asking why the  media in Delhi is not covering the Zakia Jafri petition’s arguments, which nails Narendra Modi as a conspirator in the Gulbarg Society massacre, and the Gujarat genocide of 2002.  I hereby reproduce excerpts from her detailed press statement in the public interest.

Arguments on behalf of Zakia Ahsan Jafri assisted by Citizens for Justice and Peace (CJP) in the Zakia Jafri vs Narendra Modi & 59 others criminal case. Advocates Sanjay Parikh and Mihir Desai initiated the arguments. The entire team of 14 CJP lawyers was there in full force. Being heard before the Metropolitan Magistrate, 11th Court, Ahmedabad.

The Accused No. 1, Narendra Modi’s mindset against the minority Muslim community can be traced out from his… supporting the demolition of the Babri Masjid. The State Intelligence Bureau had been consistently informing the state home minister from February, 7, 2002 onwards that members of the VHP/Bajrang Dal/BJP were preparing themselves armed with trishuls etc to go to Ayodhya to celebrate the mahayagna. This mahayagna was meant for building the Ram temple at the Babri Masjid site.

The home department of the state headed by Narendra Modi was aware of this fact… that provocative slogan shouting will take place at railway stations, including Godhra, but no action was taken.

February 26, 2002: A group of kar sevaks left Faizabad on February 26 which was supposed to reach Godhra around 2 am on February 27. The train was about five hours late. As per District Magistrate Jayanti Ravi, in her fax communication, the train reached Godhra at 7.15 am and left Godhra at 7.20 am. The same fax says that after about half a kilometre the train was stopped near Signal Falia and set on fire.

Before the train reached Godhra, violent incidents had taken place at 2 railway stations, including Rudauli

Despite receiving the fax from DM Godhra that it was the provocative sloganeering of the VHP men that led to a skirmish following the burning of the S-6 Sabarmati Coach at Godhra, Modi, as home minister, did two things: He called VHP leader Jaideep Patel to go to Godhra. Patel instigated VHP men and Hindus against Muslims in Godhra. Patel is now facing trial for his direct involvement in the Naroda Gaam carnage. (He was a close associate of Babu Bajrangi and former minister in the Modi government, Maya Kodnani, both sentenced to life imprisonment for the massacre at Naroda Patiya in February 2002.)

(Then) Minister of state (Home) Gordan Zadaphia’s statement to the SIT) states that a VHP activist Ashwinbhai Patel, who was on the train, had informed Zadaphia of the incident at 7.30 am. This is even before the time of the actual train burning.

10.30 am. February 27, 2002, a meeting took place at the residence of Modi at Gandhinagar. In the meeting, Zadaphia, Ashok Narayan, K Chakravarthi, PC Pandey and other persons of the Chief Minister’s Secretariat
were present.

Another important aspect is that when a statement was made in the state assembly at 1 pm, VHP had already announced a Gujarat bandh by about 12 noon backed by the ruling BJP. The state government did not oppose it. Modi was aware that the bandh would give a free hand to the RSS/VHP/ Bajrang Dal to lead violent mobs and vent their ire on innocent Muslims. The bandh call was, therefore, part of the conspiracy as it served two purposes: Allowing RSS/VHP/BD/BJP men to indulge in unlawfully violent activities and using the police machinery to clear public places and ordinary movement so that aggressive mobs of these organizations could target minority populations and establishments.

An important fact is the statement given by a senior minister, Sureshbhai Mehta, in Modi’s cabinet to the SIT: “I was sitting by the side of Narendra Modi… who remarked that ‘Hindus should wake up now’.” 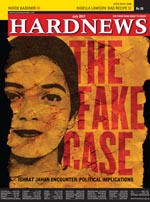