Why is the Congress political leadership and the government so paralyzed and reluctant to take on these fascist forces and their diabolical ‘gameplan’?
Amit Sengupta Delhi

Is it true that certain top BJP leaders and RSS functionaries approached some leaders of the government at the highest level to go slow on the probe regarding the Samjhauta Express in which Hindutva terrorists with RSS links are reportedly involved? Is it also not true that there have been several attempts within and outside the establishment, often triggered by forces sympathetic to the Sangh Parivar, to scuttle the investigations into the multiple Hindutva terror bomb blasts, including in Malegaon, Ajmer, Hyderabad, and so on?

Surely, it is undeniable that former home minister, P Chidambaram, was specifically targetted, as is Congress leader Digvijay Singh routinely, by the same forces, because they have been pushing the investigations into this sinister gameplan hatched to polarize the country on communal lines, and thereby create low-intensity and, perhaps, bigger, organized scenarios of sectarian violence?

It was surely not a diabolical coincidence that in these blasts, which killed several innocent Indians across communities, almost immediately, Muslims were branded as terrorists, mostly young Muslims, who were hounded, tortured, arrested and put behind bars for long spells. Most of them were later found to be innocent, there was no evidence found against them, and many of them were released, totally brutalized and broken.

There is indeed no doubt that if Hemant Karkare had not followed up on a new lead and changed the course of investigations, the Hindutva terror angle would have been buried eternally by the same forces, perhaps in nexus with the security and intelligence establishment. Crucially, in the last nine years of the ‘secular’ UPA regime, if investigations have faltered and moved on, why has there been such reluctance to take on the big players who were reportedly involved in these blasts, especially  the Samjhauta Express blast?

Crucially, in the last nine years of the ‘secular’ UPA regime, if investigations have faltered and moved on, why has there been such reluctance to take on the big players who were reportedly involved in these blasts, especially  the Samjhauta Express blast?

Surely, one top IB cop, now being directly accused of complicity in the fake encounters in Gujarat, and allegedly working in tandem with the top leadership in Gujarat along with other police officers now in jail, can’t be above the law? So why has the current Union home ministry and the UPA political leadership been so reluctant to take on the powerful lobbies which are protecting this man?

In other words, what stops the Congress big brass from taking on the fight ideologically, administratively and in terms of law and order, into the communal fascist camp?

Among many other dilemmas stalking this indifferent regime, there is surely no will to fight these dangerous forces which are openly muscle-flexing and using low-level discourse to create sectarian polarizations in civil society. This is their long term one-dimensional agenda, driven by their ‘one culture, one religion, one nation’ paradigm, and their only and last desperate trump card. Now that the corporate-backed farce of the Feku ‘Gujarat Model’ bubble has been burst, including by Amartya Sen, and the gigantic multi-crore PR machinery propagating these manufactured lies has been thoroughly exposed, aggressive hate politics and xenophobia remain their  last straw in the floating quagmire of Indian politics. This is precisely what they are planning in UP, and elsewhere.

But, the worry is, why is the Congress political leadership and the government so paralyzed and reluctant to take on these fascist forces with their vicious mental paradigms and their pathologically sinister ‘gameplan’? Indeed, if a discredited, scam-tainted Congress too is banking on the same perverse polarization to play the ‘secular’ card, and thereby go soft, it might spell doom for the nation. In that case, in this fall, hope does not float.

Why is the Congress political leadership and the government so paralyzed and reluctant to take on these fascist forces and their diabolical ‘gameplan’?
Amit Sengupta Delhi 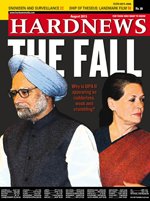