Look at life from both sides now…

As tensions escalated over the Line of Control (LoC) in August, I landed in Delhi on the eve of the independence days of Pakistan and India, invited for the launch of two books, ‘Siachen: End to the impasse?’ and ‘Fishing in troubled waters: The turmoil of fisher people caught between India and Pakistan’ (Programme for Social Action).

Both issues had acquired a fresh urgency following heightened tensions between India and Pakistan at the LoC. Although the number of casualties has drastically dropped after the 2003 ceasefire, skirmishes continue. This time, a Pakistani soldier died in cross-border firing on July 29, followed by five Indian soldiers killed in an ambush on a military patrol on their own side.

Many questions about the ambush come to mind, including how the attackers, some reportedly wearing Pakistan army uniforms, crossed the heavily guarded disputed border. Were they actually Pakistan
army soldiers?

Pakistan itself has suffered several attacks by men wearing Pakistan army or rangers’ uniforms. Why would the Pakistan army suddenly up the anté in Kashmir while facing a full-blown militancy within Pakistan that has claimed the lives of over 40,000 civilian and over 10,000 military personnel?

Questions also arise about the response of India’s political, security and media establishments that have been (with honourable exceptions) whipping up war hysteria, driven by compulsions related to domestic politics and television ratings.

Indian hyper-nationalists have counterparts in Pakistan. One example is encapsulated in this tweet, by a young Pakistan Tehreek-e-Insaf (PTI) activist, addressing Prime Minister Nawaz Sharif --  Pakistan had just announced the release of 338 Indian prisoners on August 24: “Dear PM, even after 83 times violation of #LoC, losing 1 captain, 3 civilians, having 8 injured, you still want to release Indian prisoners?”

Yes, I replied, Pakistan must release the Indian prisoners. They are poor fisherfolk, not criminals or prisoners of war, though both sides treat them as such. They have nothing to do with the LoC. Don’t make
them suffer.

Both India and Pakistan violate international laws when they arrest each other’s fishermen and impound their boats, equipment and catch, for crossing the maritime border. Pakistan arrests far more Indian fishermen than India does Pakistani fishermen, because the Pakistan side has more fish. India, say the fisherfolk, has destroyed its coastal belt with industrial pollution, forcing them farther out to sea. They are desperate enough to risk arrest by Pakistan, their boats, worth lakhs of rupees, being confiscated (never to be returned), and years of incarceration.

The young man eventually conceded that the poor fisherfolk should not be arrested. Then he expressed indignation at India’s lack of official acknowledgement of Pakistan’s gesture of releasing the fishermen.

Foreign policy statements take time, I replied. And, anyway, Pakistan did not take this step for the sake of acknowledgement, but because it’s the right thing to do.

He came back with: But what about the poor villagers on the Pakistan side of the LoC, killed by
Indian fire?

Villagers die on the Indian side of the LoC too, I said. And India also makes claims of ‘unprovoked firing’ and ‘violations’ by Pakistan.

Perhaps the discussion provided food for thought. I haven’t heard back from him.

Regardless of tensions at the LoC and who has killed whom (all of it condemnable and unjustifiable), India and Pakistan must abide by the agreements they have made, and not hold them hostage to political point-scoring, expediency and upcoming elections.

They must implement the liberal visa policy already agreed upon, and continue the process of liberalizing trade. These two simple, doable steps will greatly benefit millions of members of divided families and cross-border spouses, besides traders and small businessmen who are currently being squeezed by having to go via Dubai or smugglers. This will help the economy on both sides.

We need to cooperate to combat the common issues of poverty, hunger, illiteracy, unemployment, gender discrimination and violence — and against the ‘fasadis’ (creators of discord) who are pitting us against
each other.

And for Pakistan, normalization of ties with India is an existential issue, essential to its very survival. 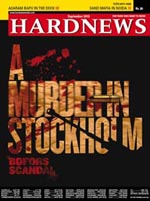