‘We don’t need a saffron, or an orange or a jasmine revolution. We are a democracy and we know how to protect it’

Elections in Bangladesh are only weeks away, but the incumbent Awami League government already seems to be in majority with the backing out of the opposition Bangladesh Nationalist Party (BNP). Gowher Rizvi, the academic-turned-Adviser to Prime Minister Sheikh Hasina Wajed, tells Hardnews that it’s still not too late for the BNP to participate in the interests of a robust democracy in Bangladesh. Rizvi, who has taught at the universities of Oxford and Harvard, suggests that the government may go for a re-election if the people are not satisfied with the January 5 outcome

Of the 300 candidates, 154 have been elected unopposed. The chief opposition party has boycotted the elections, openly accusing the Awami League of not wanting a democratic election…

The tenure of Parliament ends on January 24, 2014, which means we have to have elections and a new Parliament before January 23. In the absence of an election, the parliament will stand dissolved and there will be a complete constitutional and legal vacuum.

Who will prevent the country from slipping into complete chaos and anarchy? The BNP initially demanded a caretaker government but we did not agree to it, partly because the Awami League is committed to strengthening democratic institutions and processes.

We are strengthening our Election Commission the way India and other parliamentary democracies have done. The elections will be conducted by a statutory and autonomous Election Commission with powers to conduct the elections without any control or interference by the government. In the interest of a permanent solution and strengthening of our democratic institutions, we would have no more caretaker governments that are both unconstitutional and undemocratic.

The Supreme Court ruled the caretaker government to be unconstitutional and undemocratic. However, they also said that for the sake of state security, the members of Parliament may consider holding two further elections under this system. The decision to continue the CTG was left to the members of Parliament. Many of the parliamentarians were intrigued as to how the SC, after declaring something unconstitutional and undemocratic, could go on to suggest that it be continued. By a three-quarters majority, the MPs decided to not continue with CTG. Instead, we are trying to adapt our system like the Indian Westminster model. Elections will be conducted by the Election Commission. During election time the executive power rests with the Election Commission, not with the government. But to instil confidence in the minds of the people, we set up an election-time interim government in which all the parties were invited to participate. Though the BNP has refused to be a part of it, it still is a multiparty government represented by ministers and advisers of many parties. The space is still open for the BNP to join.

The BNP is claiming it is being persecuted and that the state security apparatus is being used to target them. One of their top leaders was picked up at 4 am from the party office…

Before answering this question it is important for the sake of transparency to make a full disclosure. One of the BNP leaders under detention is related to me through marriage. Any comment as such might be construed as a conflict of interest. But I believe that, in a democracy, no one would like to see the detention or arrest of a political leader of any party or persuasion for political activities. Nobody should be taken into custody because of his or her political activity. However, this cannot be said for many of the street activists who have inflicted huge losses of life and property on innocent citizens. They will be tried under the laws of the country.

How does one end this crisis?

We are in a dilemma here. Elections are about giving legitimacy to the government. The mandate to govern is either renewed or acquired every five years. When you have an election in which one of the major parties is not participating, obviously it loses some of its lustre but it is not automatically made invalid. Whether or not an election is valid or legitimate is for the people to decide. If, after January 5, people say, ‘Well, this election is not as good as we would have liked but in the circumstances, to restore peace, to restore law and order, to enable the country to proceed, let the government continue’, we will continue. But if the people say it’s not valid, then we will have to rethink.

It has been less bad than what has often been portrayed. We have kept the road open to Chittagong, which means the exports are going on. We depend on exports. Despite the violence, our exports in November went up by nearly 25 percent. There is no serious trouble in any of the major industrial areas. The trouble is in the Jamaat strongholds. The BNP realized that the strikes were very unpopular, for it means hurting the livelihood of the people.

They came up with the idea of blockades. But people have found a way. I am sitting in my office, you have found a way to come and see me. So the blockade is not really working. But it’s causing enormous hardship to the people. And to enforce the blockade, the party cadre, especially the Jamaat Shibir cadres, who have an alliance with the BNP, even resort to burning people in buses and cars to intimidate them. This has negated the immense development we saw in Bangladesh in the past four-and-a-half years. We are using our valuable time and resources to fight violence. The Jamaatis are chasing people out of their homes, burning properties. They are attacking minorities, who are usually more susceptible to this intimidation and violence.

What is your prognosis on the state of the economy?

Every time there is an election there is unfortunately some impact on the economy. We have revised our annual growth rate downwards. We were at 6.5 per cent and could have touched 7 per cent growth. Our economy has performed remarkably well despite the slowdown in the global economy. Despite global shrinking, our exports, per capita income, foreign exchange reserves, everything shot up.

But many people say that what is happening is a continuation of 1971 in many ways and people who are de-linking the war crime trials from elections are wrong. For the Jamaat, violence is directly related to the trials.

No, the elections are not linked to the trials. But the Jamaat violence can definitely be linked to it. They are trying to obscure their efforts to stop the trial by indulging in violence. Yes, but this is a continuation of 1971, in a big way. Those who are opposed to our liberation struggle, the national consciousness, the ideals of liberation, are fighting a last-gasp battle. The important thing to notice is that in all opinion poll findings, 75-80 per cent of the people are supporting the war crimes trial. So that means that BNP supporters and the Awami League supporters are for the trial to continue; only a small section of the Jamaat supporters are against it.

How do you look at the allegations that India is backing the Awami League openly?

Is this something new? In every election since the military takeover in 1975, this has been said. Anyone who thinks elections can be rigged or manipulated by an outside power doesn’t understand the power of democracy. It’s a people’s decision. What could India, or any other country, for that matter, do to help change the outcome?

The BNP is also arguing that the government has not been able to extract anything tangible from the Indian side. It has given too much…

Relationships have to be always mutually beneficial. Only when both sides win there is a sustainable relationship.  We have a win-win relationship with India. There are just two pending issues: land boundary agreement and water sharing. It’s just a question of whether it will be voted on today or tomorrow. On water sharing, we have reached an agreement. There is some difference between New Delhi and Kolkata over minor details, but nobody has said that the agreement we have initiated will be set aside.

It would be nice if India acts on it sooner.  By all accounts, one of the greatest achievements of Prime Minister Sheikh Hasina has been to resolve all outstanding issues and we are now embarked on some major cooperative ventures in the field of joint basin management, joint venture in hydro-electric projects, building transport infrastructure to promote greater connectivity with our neighbours in South and Southeast Asia, and we have obtained complete dutyfree access to the Indian market.

How do you perceive the increased interference from international agencies?

If you look around, this sort of thing happens everywhere in the world. But there’s a big difference between Bangladesh and other countries. We are a democracy. You are not here to topple a military rule or a monarchy. We have our own safety valve – our own elections. People have their own ways of taking a decision. We don’t need a saffron, or an orange or a jasmine revolution to bring democracy to Bangladesh. We are a democracy and we know how to protect it.

‘We don’t need a saffron, or an orange or a jasmine revolution. We are a democracy and we know how to protect it’

Read more stories by ‘We don’t need a saffron, or an orange or a jasmine revolution. We are a democracy and we know how to protect it’ 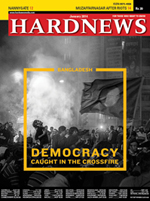