Why do waste-pickers continue to be a neglected lot, in spite of their vital contribution to keeping a city clean?

Mary is a waste-picker in Bengaluru. A single mother of two, she walks up to 25 km every day to collect 75- odd kg of waste, for a paltry sum of `100–150 a day. Being a woman, Mary is often harassed by lewd and drunk men, questioned by the police, threatened by other contract workers, laughed at by kids or accused by the neighbours of being a thief, yet she continues making rounds to collect waste, every day. Waste-picking for her and 25,000 others in Bengaluru is not a hobby, but an occupation that—apart from a fair share of hazards—is considered dirty, ridiculed and traditionally excluded from the narratives of urban life.

Like most Indian cities, Bengaluru has a booming informal economy with an estimated 25,000 waste-pickers, working together with the municipal waste system as it follows a centralised approach of collection and transportation to the landfills. However, despite this attitude of treating waste as disposal, several community-based initiatives were set up in the late 1980s, stressing the need for public participation in solid waste management. The Centre for Environment Education (CEE) started the Committee for Clean Bangalore in partnership with various organisations in 1989 to promote segregation at source. Twenty years later, in 2009, a group of individuals called the Solid Waste Management Round Table (SWMRT) got together to promote decentralised waste management in the city for efficient waste handling.

In 2011, an alliance of waste-pickers filed an affidavit for recognition of waste-pickers which led the Lok Adalat to issue the landmark directive to the Bruhat Bangalore Mahanagara Palike (BBMP) for the registration and enumeration of waste-pickers and scrap dealers. Around 8,000 waste-pickers were enumerated and more than 6,000 provided identity cards by the municipal body, which had the signature of the Commissioner of the city. This was facilitated by Hasiru Dala, a waste-picker member-based organisation, and the occasional advocacy of Solid Waste Management Round Table.

The identity card made them the legitimate children of the republic. It allowed them to collect waste without facing harassment from the state or other relevant bodies. The identity card also became a proof to avail of other social welfare services provided by various governments like scholarships for the children of those in unclean vocations, enumeration for Rashtriya Swasthya Beema Yojna (RSBY) and so on. Hasiru Dala was instrumental in ensuring enumeration and recognition for the workers.

But recognition was just the beginning. The Bengaluru municipal body took another great step by signing a Memorandum of Understanding (MoU) with the erstwhile informal waste-pickers to operate ‘Dry waste collection centres’ (DWCC)—recyclable material sorting and collection centres. Hasiru Dala provides managerial services in those centres. In addition, waste-pickers are upgrading their skills to become total waste management service providers, consultants who can be hired to do urban organic farming and to ensure zero waste weddings.

According to Hasiru Dala’s studies, Bengaluru generates around 3,000–5,000 tonnes of waste daily, of which a third, or 1,050 tonnes, are sorted by around 15,000 waste-pickers to be sent for recycling. This reduces carbon and methane gas emissions, as well as helps to economise the space in landfills. Around 16,850 cubic metres of space, equivalent to seven Olympic-size swimming pools, is saved every year due to this remarkable effort. By recycling paper alone, the waste-pickers end up saving around 7,962 trees a year. By sending plastic and glass for recycling, they save 3.9 million electric units. Recycling also obviates a trip to the landfill, thereby saving around 2,335 litres of fuel which would have been used in its transport.

Waste-pickers’ contributions to the reduction of municipal waste-handling costs, resource recovery, environment conservation and climate change mitigation has been documented by various studies and the Expert Committee on Solid Waste Management constituted by the Supreme Court of India. With the Swachch Bharat Mission, the focus must be on organising and reclaiming these livelihoods.

Why do waste-pickers continue to be a neglected lot, in spite of their vital contribution to keeping a city clean?
PinkyChandran, KabirArora and Nalini Shekhar Bengaluru 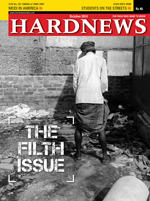