A lot can happen over coffee

As Delhi continues its transformation into a global capital with shinier cars, broader roads and glitzier malls, some spaces still offer respite from the bland homogeneity. Tucked away in Shadipur Khampur in Western Delhi, May Day Bookstore & Cafe has become a hub for alternative ideas and politics ever since it was launched in 2012.

On May 26 2014, when news channels across India were telecasting Prime Minister Narendra Modi’s swearing-in ceremony, an alternative narrative was taking place in the café’s humble quarters. Artists Chirag Thakker and Inder Salim put up an impromptu art performance titled “The Fascists have arrived” , watched by a sizeable crowd. The performance raised critical questions on issues of development, gay rights and censorship,
among others.

Sudhanva Deshpande, director of the cafe, says, “When we found this space, we were looking at setting up a small hub for alternative left-wing radical ideas. We didn’t want to keep it limited to books but to bring together different things like performances, book readings, food and theatre.” Opened to the public in May 2012, May Day Bookstore & Cafe is housed in a building which encompasses Leftword publishing house, Jan Natya Manch,  a radical theatre group run by Deshpande, and the All India Democratic Women’s Association. It is the coming together of these elements that makes the cafe a radical space where the idea behind it comes alive.

The bookshelves are lined with Leftist literature from across the world. There are books on the theory of Marxism and capitalism, non-fiction like Manisha Sethi’s Kafkaland about political prisoners in India, historical fiction such as Tariq Ali’s The Islam Quintet, crime fiction, art, sports, cinema and performance.

Sanjana Kapoor, founder of Junoon, a travelling theatre group, and former Director of Prithvi Theatre, is a regular at May Day Bookstore & Cafe. She has performed, given talks and attended several events here. She says, “The creation of this place is an inspiring story. When Sudhanva was dreaming of a space like this, it seemed like an impossible idea, especially with no financial backing. I have to admit that I told him  it wouldn’t work out.”

In these times, when spaces for voicing alternative opinions is shrinking, May Day Bookstore & Cafe is keeping alive a space for public discourse, responding to contemporary happenings. In response to the spate of hangings that took place after Pranab Mukherjee became the President of India, the café hosted a discussion on the death penalty. When rationalist Narendra Dhabolkar was gunned down by alleged right-wing elements in August 2013, the cafe held a talk by historian Romila Thapar. The Sunday brunch is a big hit with May Day Bookstore & Cafe regulars. After Dr. Verghese  Kurien passed away in September 2012, journalist Harish Damodaran spoke about the history of Amul at the café. Every dish on the menu that day had milk. On another day, there was a Chinese food -themed brunch where participants brought food themselves and engaged in a talk on food cultures in China. Vineet Kumar, a media critique and a May Day Bookstore & Cafe regular, says, “It is a space where you can talk freely without any manipulation. Quite unlike the India Habitat Centre or the India International Centre, where there is a superficial airing of opinions.”

Deshpande believes that the café upturns the belief that “Marx is dead”. He explains, “There is an argument that Marx is dying and dated. We find that the more people say that, the more relevant he becomes. We just came out with a new print of the three volumes of Marx’s Das Kapital and young people are buying it with a lot of enthusiasm”. The cafe held a six-month course taught by historian and journalist Vijay Prasad that attracted students and working professionals alike. While there were 50 people who attended the classes regularly on one occasion, the number swelled to 150 at one point.

Amongst artists, the cafe has emerged as a place that fosters political and artistic risk for people from across the progressive spectrum. Deshpande says, “In the field of performance, people are trying different things. It is risky, not necessarily politically, but artistically. It is impossible to do such a performance elsewhere.” He gives an example of Arka Mukhopadhyay, a performance artist who was unsure of his piece because it involved exposing his body. Deshpande assured the artist that he could go ahead with his performance and that if someone from the audience was uncomfortable they could raise questions. However, if the disruption was politically motivated or led by the right-wing, he would stand by the artist.

Historian Mukul Manglik summed his expectations from May Day Bookstore & Café during a speech he gave at the inauguration two years ago. He had said, “Finally, in these times of economic and political barbarism, when the Left appears to have lost its way, just when the need for a progressive Left alternative is the greatest ever in recent memory, I hope the everyday presence of May Day Bookstore & Cafe in our lives will remind us of the urgency to revisit and engage critically, fearlessly, ruthlessly and open-mindedly with the wider history of the international labour movement and Left politics, so that we may begin to find ourselves, and inspire once again with ideas, examples, visions, joys, dreams, words and everyday democratic practices and cultures.” A visit to the café will confirm that it is striving every day to live up to the spirit of these words.

A lot can happen over coffee

Read more stories by A lot can happen over coffee 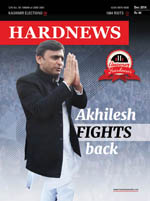