‘Publicly, the Indian government may have denied these suggestions, but it was possible to sense some kind of quiet satisfaction in the diplomatic community over how Rajapakse’s fall was engineered’

There is perceptible glee in Indian diplomatic circles after Sri Lankan President Mahinda Rajapakse was voted out in the January 8 elections. Over the last few months, Rajapakse had antagonised the Indian government by displaying manifest proximity to the Chinese government. “He had literally sold the entire country to the Chinese to buy political longevity. His continued presence would have hurt Indian interests”, claimed a senior government official.

Rajapakse had taken hefty loans— almost $5 billion—from China to rebuild his country’s war-battered infrastructure. Besides partnering with China in the $1.5 billion Hambantota port project— against India’s objections—Sri Lanka had also built a modern airport at Mattala. Not just these investments, the Indian government was also watching with trepidation how its Sri Lankan counterpart was slowly getting engaged in China’s ambitious maritime silk route project. In some ways, when the Chinese nuclear submarine showed up in Sri Lankan waters, a quiet resolve began to build in the new Modi government’s security establishment that such activities could not be allowed to continue uncontested in an area that resides in India’s arc of influence.

So, did the Indian government actively connive to bring Rajapakse down? A Reuter report of January 18 claimed that a senior official of the Research and Analysis Wing (R&AW), India’s external intelligence agency, was expelled by the Rajapakse government for working closely with the opposition parties. Publicly, the Indian government may have denied these suggestions, but it was possible to sense some kind of quiet satisfaction in the diplomatic community over how Rajapakse’s fall was engineered.

It was in December last year that India’s National Security Adviser, Ajit Doval, visited Sri Lanka. Although he had gone to the island nation to deliver a lecture on the invitation of the Sri Lankan army, he met with the then opposition leader and now Prime Minister, Ranil Wikremesinghe. His meeting with Wikremesinghe did not raise too many eyebrows, though The Hindu report of December 2, 2014, states, ‘the NSA is reported to have enquired about the election strategy and campaign plans of the common platform that the UNP is backing, said sources. The issue of China’s role in Sri Lanka—a major concern for India— also came up in discussions, said the source.’ At that time, not many were discussing the possible fall of Rajapakse’s government, but Delhi’s diplomats who are also attached to Colombo had begun to toy with thoughts about the possibility of his electoral loss. It seems that the Indian government agencies had also sensed that Rajapakse’s influence had diminished due to the departure of his core constituents. However, he wouldn’t have been ousted from power if he had enjoyed the support of the army and the bureaucracy.

Although the Reuter report does not state as to who convinced them to stay neutral in the elections, the outcome of their approach was quite visible. Sources claim that when Rajapakse and his partymen realised that he was losing, they got in touch with the army top brass to stall the polls and tried to stay in power. Despite the fact that the army was under the command of his brother, the generals refused to respond to these requests. Contrarily, they conveyed to the Election Commission authorities that they should hasten the poll process so the transfer of power could take place peacefully. It may be recalled that Rajapakse resigned and Maithripala Sirisena was sworn in on the same day to the high office when the results were announced. Normally, the winner takes some time before he or she assumes office but this time around Sirisena and his coalition did not want any delay. A highly placed Indian official told this writer that there is considerable merit in the assertion by Sri Lankan Foreign Minister Mangala Samaraweera that Rajapakse tried to organise a coup against the new government. This official is of the view that Rajapakse may be tried at a later date.

Samaraweera visited Delhi a few days after the new government was elected to convey to the world that Sri Lanka was lending primacy to its relationship with India. The buzzword was course correction and to end the slant towards China. Prime Minister Wickremesinghe also said that Rajapakse had tried to play China against India and that would not be entertained. During the election campaign, investment from China was an issue and there was a promise to relook at some of it. Charges of corruption were levelled against the Rajapakses in some of these deals, which the new government promised to investigate.

It is unlikely that the Indian government can really step in to replace China as its track record, when it comes to execution of projects is quite abysmal. Worse, its investment is barely $305 million and it is not in a financial state to fill in the gap—if the Chinese move out from some of these commitments. So, although the Indian agencies may have succeeded in seeing the back of a pro-Chinese leadership from Colombo, as in the case of Myanmar, they are not in a position to adequately replace them. The Indian government will have to worry, too, about how Sri Lankan developments are being perceived by Beijing.

Does the Chinese government see it as a hostile act to restrict its influence in the Indian Ocean or as a normal development that happened due to changed political circumstances? The conduct of the new government in Colombo will decide a lot of things that will determine the course of this growing tension between India and Sri Lanka in the Indian Ocean. 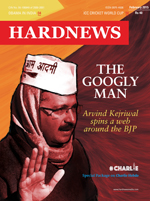