Bihar politicians have dropped their effective policy approach to pander for votes among Backward classes. Will their bid to shake the BJP pay off?

Before the 2014 Lok Sabha elections, Nitish Kumar had it all: he was heading the new development narrative of Bihar; he had transformed a ‘bimaru’ state into a state with one of the highest growth rates in the country; he had overseen the building of a web of roads and bridges. His social sector schemes were praised by academicians and journalists alike. Where crime once kept people off the streets, Patna was bustling and commercial establishments were booming. Bihar was changing and Nitish Kumar was the face of
this change.

After the 2014 Lok Sabha elections, though, a shift occurred. The Modi wave that swept the country left Nitish Kumar a defeated man. While he fared poorly at the polls, it was not so much the elections but the personal battle of egos that defeated him. After all, he was still the chief minister of the state, and as his analysts must have told him numerous times, people tend to vote differently in national and state level elections. There was no real evidence that the Lok Sabha results were a verdict on his two terms as Bihar Chief Minister, or a prophetic announcement of his fate in the 2015 state elections, but Kumar was blind. His ego bruised, and irritated by the power tiffs within the party, he resigned. This one step completely changed the politics of Bihar and pushed the narrative away from development.

If people thought that his resignation was the start of the fall of Nitish Kumar, they were proved wrong by what he did next. In what must have seemed like a masterstroke, of the sort of symbolism that his rival, Lalu Prasad Yadav, is known for, he appointed Jitan Ram Manjhi as the new chief minister. Then a Nitish loyalist, Manjhi is a member of the Musahar community—which falls among the Mahadalit category of voters Kumar had been aggressively wooed over the past two terms. By naming him CM, Kumar would cement his image as someone who really cared about the Mahadalits. Moreover, since Manjhi was loyal to him, Nitish himself must have imagined he could govern the state from the backseat. Sadly for him, it didn’t work out as planned.

After assuming the post of Chief Minister, Manjhi decided to assert himself. He started taking decisions on his own, some which were not in sync with what Kumar had in mind. He started shifting Kumar’s trusted bureaucrats, and spoke his mind whenever he got an opportunity, sometimes even openly criticizing Kumar. Spurred on by the BJP and a coterie of ministers who were anti-Nitish/pro-power, Manjhi began to project himself as not just a temporary stand-in, but a suitable long-term replacement for  Kumar. It took around ten months for  Kumar to oust Manjhi and expel him and his supporters from the party.

Apart from the damage done by that gaffe, Kumar had other things to worry about. He hadn’t recovered from the personal battle he lost during the Lok Sabha elections. Apparently wracked with self doubt,  instead of returning to governance and winning the state elections on the merit of his work, he looked for a solution in the age old number game of caste politics. The combined vote share of JD (U) and RJD in the Lok Sabha polls had been less than that of the BJP. Again, this was due more to Modi than the emergence of any local political stars, but it was enough to leave the two regional parties in a panic. So serious were their fears that the rumors of a possible alliance between the JD (U) and RJD were afloat as soon as the results came out. The idea appeared to be that an alliance between JD (U) and RJD and, more importantly, their caste bases, was critical to defeat the BJP. But before that could happen, their leaders had to somehow find a common ground. Arch rivals with huge egos, Kumar and Lalu have no love lost between them. To find a common platform, they first floated the idea of reviving the old Janta Dal. Then, Mulayam Singh Yadav was brought into the picture. An elder politician and a common friend to both leaders, he was someone who could oversee the negotiations between the two parties. The alleged party ‘merger’ seemed suspicious from the start, as no substantial plans had been worked out. One can’t say if the whole affair was really a merger of the old Janta Pariwaar or just a smokescreen under which negotiations were carried out for forming an alliance in Bihar.

With the finalization of the tie-up between the JD (U) and the RJD, the shift in the political narrative is complete. Instead of Kumar’s achievements in ‘development’, the emphasis is on the union of JD (U)
and RJD core constituencies (read, ‘caste constituencies’).

The biggest political questions are not what programmes the allies will present, but whether their respective backers will be able to put aside their rivalries, at least for the state elections. When that’s not the talking point, it’s whether Lalu will actually be able to swallow the poison he drank, when he allowed  Kumar to be projected as the chief minister. Talk of ‘development’ is now restricted to PR campaigns. The real politics at ground level is still the management of caste groups and alliances.

This is disheartening, because it again makes caste the centre of all politics—turning voters from the proverbial informed citizens into mere members of a caste group, who all vote collectively. Moreover, it relegates the achievements of the past ten years to peripheral status, which reflects the sad state of our electoral politics and democracy as a whole: it re-affirms that India is still a procedural and not a substantive democracy.

In that context, it will be interesting to see how the JD (U)-RJD alliance functions if it comes to power. Will Kumar indeed take the helm and continue the work he’s been doing, or will the priorities change with this new alliance in place?

The answer will surely depend on Kumar himself. Ousting Manjhi resulted in attacks from sections of Mahadalit leaders, activists and the intelligentsia. If Mahadalit voters abandon him, too, then all the work he has done to lure them may come apart—a travesty.

One of the most backward sections of society, the Mahadalit certainly require all the special schemes and opportunities they can get. These kinds of fundamental development issues are precisely what politics is supposed to be about, and it is on questions like these that the next government will be judged, but for now the narrative of the polls is all about caste.

Bihar politicians have dropped their effective policy approach to pander for votes among Backward classes. Will their bid to shake the BJP pay off?
Abishek Jha Patna 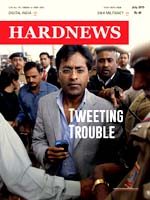