The new age of thought crime

There are different versions emerging about why Sirazuddin, a marketing officer of the public sector oil company, Indian Oil, was arrested. Was he “linked” to the Islamic State, as a media report indicated, or “recruiting” gullible Muslim youth unhappy with the Indian State? There were other reasons that have appeared in subsequent reports on the factors behind the arrest: he had a downloaded copy of Islamic State’s magazine and had visited many of their websites and Facebook pages. So is it a crime to read subversive literature? What does the Indian Penal Code say about possession of banned literature? Precious little! Police routinely uses the Unlawful Activities (Prevention) Act, 1967, to arrest those found with literature from a banned organisation, though the Bombay High Court has stated categorically that its possession does not prove membership of the outfit. Newspaper reports suggest that Sirazuddin’s parents are inconsolable. They claim that their son has committed no crime except to visit some Facebook pages and “like” them. A police official who was quizzed by the local media on whether more members of his gang would be arrested candidly replied:  “Not in Rajasthan, but maybe from other parts of the country.” Though unrelated to this case, there have been so many reports of people being detained from different parts of the country for wanting to travel to Syria and “join” the Islamic State. There are also reports of Indians being brought back from the UAE and some African countries for engaging with the Islamic State. How are these people sitting in the comfort of their houses being arrested? Isn’t this a replay of the world that George Orwell visualised in his great book, 1984, where people would be arrested for committing a thought crime? Quite clearly, people are being arrested for harbouring sympathy and admiration, perhaps, or visiting websites that are being seen as subversive.

If the Rajasthan police official is to be believed, Sirazuddin was arrested after following a detailed process. The truth is more complex. The bulk of the information on the sympathisers of the Islamic State is coming from the surveillance done by the “five eyes” of the US, UK, Canada, Australia and New Zealand. As they are resource-rich and have the surveillance equipment to track all the information that is of interest to them, they are able to pretty much do what they want. Now it is being uncovered that these intelligence operations were able to influence the outcome of the Climate Change conference, the G20 summit and WTO meetings in favour of the US and its allies.

Whistleblower Edward Snowden, who has moved with a trove of a million-odd classified documents of the US’s National Security Agency (NSA) to Russia, has shown how every conceivable privacy law of many countries has been violated by the US and other partners to keep track of ordinary lives in the name of security. Snowden has revealed how social media is tracked at the level of optic fibres to allow the NSA to create metadata on who is visiting which website or Facebook. Based on this information, people are put in categories and their surveillance is heightened. Snowden had revealed a presentation of NSA to show how an Al Jazeera bureau chief in Islamabad, Ahmed Muaffaq Zaidan, was shown as a member of Al-Qaeda as well as the Muslim Brotherhood. This classification was based on surveillance that he was subjected to over a period of time. The building blocks of this analytics included travel and behavioural patterns. The analytics kept a watch on how many times sim cards or handsets were changed, or whether the mobile’s incoming calls facility was being activated regularly. In terms of behaviour patterns, what was watched was the number of trips a person made to the airport.

The newly passed French surveillance law brought in after the Charlie Hebdo terrorist attack in Paris earlier in 2015 is really a step beyond whatever has been conceived till now. It will keep track of possible terror suspects using a logarithm that can anticipate a person’s radicalisation in the future, based on analysis of his/her conversations and browsing data. This is a dangerous way of figuring out how a person will behave in the future as the human mind remains elusive and beyond the easy reach of technology. It does not factor in the possibility of distraction by popular content like pornography, for instance.

What the State is trying to do is to position itself as the Orwellian Big Brother that watches everyone and everything – in the name of security of the society. Many of those who are put under surveillance are never told why they have been under watch and when they will be free of it. Anyone who unfortunately visits the “wrong” websites or clicks “like” on politically incorrect websites could be condemned to a life of incarceration and public shame. After all, the police is always quick to leak sketchy details of such “crime” through association to the media. Every day there are more reports coming in of impressionable youth being apprehended for alleged links with the Islamic State. How serious is it? Government sources talk of the diffuse character of this threat. It’s not a gang, they will tell you, but people sitting alone in their rooms and spending time on websites that have the power to indoctrinate the gullible and angry.

What is really disturbing is that the intelligence that the foreign intelligence agencies push into our system could hurt Indian interests. We have many enemies, but they cannot be those that trouble the “five eyes”. The disastrous implications of blind acceptance of their information do not escape some thoughtful people in the government who know that these hasty arrests of excitable young men and women could tear apart our plural society. Some years ago, when a journalist, Syed Ahmed Kazmi, was arrested for conspiring to kill an Israeli diplomat, all that the Indian investigators had against him was “technical intelligence”, probably phone intercepts supplied by Western agencies. On their own, the Indian law enforcement agencies did not have much evidence against Kazmi. The case became quite messy and developed serious political overtones.

What I am driving at is that the law enforcement agencies at the level of the State should develop greater capacity to sift through the evidence that comes to them from central intelligence agencies. While they should not lower their vigil in these difficult times, they should also not be innocent instruments of a larger conspiracy to divide Indian society or feed grievance amongst the minorities towards the Indian State.

The new age of thought crime

Read more stories by The new age of thought crime 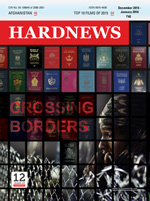