As UP goes to the polls next year the Bharatiya Janata Party is reviving the Ram temple issue to ensure vote polarisation, despite escalating communal tension in the state. The party’s actions could end up opening a Pandora’s box of epic proportions
Pradeep Kapoor Lucknow

To veteran political commentators it came as no surprise when a large consignment of stones reached Ayodhya last year for the construction of the Ram Mandir. With the Uttar Pradesh (UP) Assembly elections barely a year away, Ayodhya as an issue is being aggressively brought to the forefront.

That such a scenario would arise was perhaps not unexpected. When the Bharatiya Janata Party (BJP) came to power at the centre in 2014, riding on a clean sweep of the Lok Sabha seats in UP, many believed that the construction of the Ram temple was imminent. After all, the long standing BJP position on the issue has been that they would only construct the temple if they came to power on their own strength. Since this did not happen, the BJP leadership remained quiet for a while on an issue that had contributed to the party’s meteoric rise in the 1990s. In the first year of its rule, the party’s effort was to interpret the massive 2014 mandate as one for development. The party consciously decided to go easy on the Ram Mandir issue. A lot of water has flown under the bridge since then.

Many who had hoped for a radical transformation in their fortunes after Modi became the PM are now a disappointed lot. There is a growing view that the BJP would find it difficult to get even half of the parliamentary seats in the upcoming Assembly elections. The abrupt revival of the temple issue has to be seen in this context.

Prominent Hindutva leaders like Subramanian Swamy, Mahant Adityanath, Uma Bharti and RSS chief Mohan Bhagwat are now talking of the urgent need to construct the Ram temple at Ayodhya. Even UP Governor Ram Naik and Rajasthan Governor Kalyan Singh have offered their two cents on the issue.

The extremely public manner in which Singh celebrated his birthday in Lucknow, camping there for a couple of days, sent tacit signals that he could be projected as the main face of the party in the 2017 Assembly polls. For the uninitiated Singh was the UP Chief Minister when the Babri Masjid was demolished on December 6, 1992. He had then owned responsibility for the demolition and emerged as the face of the Hindutva forces by stating: “Jo kaha so kiya.” During the visit to Lucknow he remained non committal as to his future plans and said the party high command would decide the future course of action.

Given this context, it is no coincidence that news regarding the arrival of the stones for construction in Ayodhya was trending.

Although the National Democratic Alliance won a staggering 73 out of 80 seats from UP in the 2014 Lok Sabha polls, riding on the Narendra Modi wave, the morale of the party cadre in the state is at an all time low. In the absence of any charismatic leader whom the party could rally behind, the party appears rudderless. So the best option to revive the fortunes of the party, the local leadership feels, is to expedite construction of the Ram temple, which would help in polarisation of votes.

The matter is currently pending in the Supreme Court and senior BJP leader Subramanian Swamy has talked about speeding up the trial through daily sittings of the court.

The VHP leadership has announced that the Margdarshak Mandal, after seeking the prior consent of the Sant Sammelan, will meet in the first week of February at the Allahabad Magh Mela. They will then decide on the course of action for the construction of the temple. The Margdarshak Mandal could give an ultimatum to the Modi government to prepare the ground for a speedy trial.

On the other hand, the Babri Masjid Action Committee was quick to retort that the issue was pending in the Supreme Court and furthermore that all political activity should await the verdict. Opposition parties have joined the debate on the Ram temple as they would also benefit from the polarisation of votes.

Bahujan Samaj Party (BSP) supremo Mayawati, who was Chief Minister with BJP support in the past, squarely blamed the Sangh Parivar for raising the Ayodhya issue. Meanwhile Samajwadi Party (SP) leader Mulayam Singh Yadav is also trying to rework his electoral strategy. In an attempt to shake off the impression that he is pro-Muslim, he has apologised for the police firing on kar sewaks. 13 kar sewaks died as a result of this state ordered crackdown in 1990. Justifying the police action, Mulayam said it was needed to protect the Babri Masjid.

Reacting to Mulayam Singh Yadav’s statement, Mahant Ram Vilas Vedanti, the head of the Ram temple movement and VHP leader, said that Mulayam should visit the Ram temple to apologise. He further pointed out that Mulayam had recently organised a yajna in various temples of Ayodhya on his birthday to repent for the police firing.

Uttar Pradesh Congress Committee (UPCC) president Nirmal Khattri, who has twice been the MP from Faizabad-Ayodhya, minced no words in his scathing criticism of the BJP and the Sangh Parivar for raising the temple issue during such a sensitive time.

Chief Minister Akhilesh Yadav is facing a testing time as there have been more than 600 incidents of low-intensity communal violence in the state with the majority taking place in western UP. According to intelligence inputs, Muzaffarnagar, which witnessed communal riots two years ago, is once again very tense. Police sources fear that if strict action is not taken, the situation may spin out of control again.

As UP goes to the polls next year the Bharatiya Janata Party is reviving the Ram temple issue to ensure vote polarisation, despite escalating communal tension in the state. The party’s actions could end up opening a Pandora’s box of epic proportions
Pradeep Kapoor Lucknow 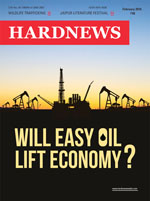