The elections in West Bengal will be held in six phases. The Election Commission perhaps devised this long-drawn-out schedule with the implicit intention of stopping decades-old practices of ‘vote loot’, muscle power, intimidation, official manipulation and organised rigging, including ‘scientific rigging’ which was the uncanny metaphor during the heydays of the Left Front in West Bengal. Indeed, the Left has accused the ruling Trinamool Congress (TMC) of mass rigging in local elections in the past; so much so that several seats went uncontested in favour of the TMC as Left candidates could not even file nominations in the face of ‘TMC terror’. The six phases will culminate when the results are announced on May 19.

The upcoming election has thrown up a new dynamic — an alliance between the Congress and Left parties. While there has been an arrangement between the two in the past, most recently in 2004 when the Left parties lent support to the first UPA government from outside in Delhi, such an open alliance where the two have come to a seat-sharing agreement has never happened. This alliance was the brainchild of CPI(M) central committee member Gautam Deb and Congress member Om Prakash Mishra (incidentally, a former NSUI leader from JNU). They have called for an alliance of the ‘democratic and secular’ forces to uproot Mamata Banerjee’s TMC government, which got an absolute majority in the last Assembly elections, leaving the CPI(M)-led Left diminished and demoralised.

The alliance was brought about by the two parties to remain relevant in the face of severe loss of public support. The Left’s vote share has slipped to 30 percent from the huge majority it won in 2006, while the Congress, too, is facing the heat of a turf war with its former ally, the TMC, which has not yet shown any signs of relenting.

This brings us to the much-vaunted ‘Siliguri model’. To prevent the TMC from capturing polling booths in the elections to the Siliguri Municipal Corporation last year, the Left and the Congress together resisted the ruling party machinery. Finally, the Left Front formed the board. This was repeated in the Siliguri Mohokuma Parishad poll a few months later, sowing the seeds of a possible alliance between the two for the Assembly elections.  Political observers say that the Left has regained some ground in north Bengal in the recent past.

However, to say that this election will throw up a surprise result due to the coming together of these two forces is to expect a miracle. For all its drawbacks, the TMC has managed to tighten its grip on the rural population, almost monopolising it. The Left Front government traditionally drew support from the rural belts which, observers believe, was largely due to its successful implementation of the land reform system under Jyoti Basu between 1977 and 1980, popularly termed Operation Barga. The CPI(M), the dominant party during its three decades-plus rule, also had as its major source of mobilisation and grassroots power extra-constitutional power structures spread across the rural interiors of the state.

However, since the massive protests in Singur and Nandigram during the regime of Buddhadeb Bhattacharya and the uproar in West Bengal against police atrocities, followed to some extent by protests against the Netai massacre, the rural base of the Left has been decimated to a large extent. And it is not only atrocities by the CPI(M), and its ‘misunderstood’ economic policies, that are to blame here. The TMC has managed to unleash a similar reign of terror that symbolised the last decade of Left rule. In many ways, the earlier forms of extra-constitutional structures, corrupt party apparatus and localised muscle power have been effectively co-opted and duplicated by the TMC. While the Opposition parties have branded the elections post the 2011 ‘change’  as “farcical” — notably the 2013 panchayat polls, the 2014 Lok Sabha elections and the 2015 Kolkata Municipal Corporation elections, the numbers make stark reading for those on the opposing side of the aisle. 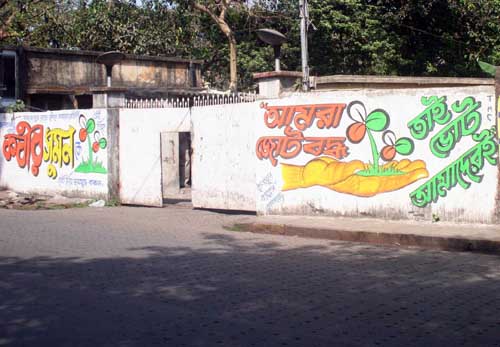 Contesting against a rainbow alliance of the ‘sentimental’ slogan of ‘Ma-Mati-Manush’ (Mother, Land and People), the Left Front, which had won 233 seats in 2006, was reduced to just 63 in 2011. Out of those 63 seats, the CPI(M) won 40, the Forward Bloc 11, the Revolutionary Socialist Party (RSP) seven, the CPI two, the Samajwadi Party one and the Democratic Socialist Party (Prabodh Chandra) one.

In contrast, the TMC-led coalition secured a huge mandate of 227 seats. The TMC alone won 184 seats while the Congress and SUCI(C) won 42 and one, respectively. In percentage terms, the Left combine won around 40.77 percent of votes against the TMC-led alliance’s approximately 48.46 percent.

In the Lok Sabha elections in May 2014, the vote count was as follows: 39.30 percent for the TMC, 29.5 percent for the Left Front and 9.60 percent for the Congress. However, to extrapolate that figure into 2016 would be foolish, simply because of the 16.88 percent vote share the BJP garnered in the general election with the Modi wave sweeping the country.

While a major shift in vote percentage benefitted the BJP’s kitty, it was essentially a vote for Narendra Modi. The saffron army rode the euphoria surrounding Modi’s seductive promises and ‘Achhe din aane waale hain’ rhetoric and managed to secure support from a wide spectrum of voters who had previously shown allegiances to other political parties. It would be safe to assume, considering the TMC’s vote share from 2011 increased from 38.93 percent to 39.30 percent, the majority of the swing in favour of the BJP was from the Left (even the Congress managed to increase its share from 9.09 percent in 2011 to 9.60 percent in 2014). Indeed, after the last Lok Sabha elections, the top CPI(M) leadership in Delhi told journalists that not only its cadre, even Muslims were shifting towards ‘BJP patronage’.

To assume that the Left will retrieve the entire chunk it lost to the BJP would be highly speculative. The result for the BJP in 2014 was its best ever — it had won 11.66 percent of votes in 1991, 6 percent in 2009 and 4 percent in 2011. To say that it will lose the entire chunk it gained would be foolhardy. There will be a percentage of BJP votes that will swing back to the Left, but the real question is, how much?

Clearly, the Left and the Congress have alienated some of their traditional support base through this deal. An old-time female Congress voter states that the Left’s atrocities against Congress workers before the emergence of the TMC makes her have little sympathy for the Left and she will vote for Mamata Banerjee. Sentiments are similar in the Left spectrum. A first-time voter from a family of CPI(M) loyalists in Banerjee’s constituency, Bhawanipore, where the Congress is fighting with Left support, said he would not cast his precious first vote in favour of the ‘hand’.  Deepa Dasmunshi, wife of ailing Congress leader Priyaranjan Das Munshi, is the Congress candidate here.

Arijit Pal, a Students’ Federation of India (SFI) worker in his college days, believes the alliance or understanding was necessary to remove the “fascist force in power” in the state at the moment. Pal says, “There is need for a secular and democratic alliance in the state. I hope the fascist governments here and at the Centre are removed as soon as possible.”

Asked whether the Left and Congress should have tied up the alliance much earlier and if both should be wary of losing some of their own votes, Pal says, “Of course, the CPI(M) should have given the call for an alliance of all secular and democratic forces during its last party conference. Now they have to go to each and every voter and explain why they went for an alliance this time. I hope the voters will respond to their call.”

Pal’s comments echo the Left Front election manifesto, which attempts to “bring all democratic and secular forces on a common platform”. “A total unity among people can help instal a Left democratic secular government,” says the manifesto. Left critics consider this wishful thinking.

A party worker from north Kolkata said the percentage of voters who would choose not to vote for the Left or Congress during the elections is negligible. He said: “People who are ideologically staunch and inflexible towards this alliance will not be flexible enough to vote for the TMC. They may choose not to vote or punch the button of NOTA, but not the TMC. However, this would be a very negligible percentage and I am sure both the Left and the Congress will have considered them in their calculations.”

On the timing of the alliance, he said, “This kind of situation arises out of necessity and is extremely rare. When two forces with very few ideological similarities come together, it obviously takes a lot of discussion to force it through.”

A senior journalist from a reputed Kolkata daily also feels the election will throw up a result that may surprise observers and party leaders. “People here are more worried about the present government and will do anything to remove it before considering anything ideological,” he said.

This brings us to the much-vaunted ‘Siliguri model’. To prevent the TMC from capturing polling booths in the elections to the Siliguri Municipal Corporation last year, the Left and Congress resisted the ruling party machinery With an alliance. Observers say that the Left has regained ground in north Bengal

However, the ‘alliance’ also exposes the urgency and desperation of both the fronts. The Left will depend on the Congress securing its traditional vote bank in Malda and Murshidabad districts, where the grand old party has a reasonable stronghold. Out of the 12 seats in Malda, the Congress won eight in 2011 with the CPI(M), RSP, Forward Bloc and TMC winning one each. In Murshidabad, which has 22 seats, the Congress won 14 in 2011, the CPI(M) five and the TMC, RSP and Samajwadi Party got one each.

What is unique about this alliance is that in several constituencies, the Congress and Left parties are taking each other on in what leaders of the two sides have termed “friendly fights”. Most of the Congress vote will come from these two districts and to some extent from the two Dinajpurs, but to expect that to make a major difference in the overall scenario is unrealistic.

Perhaps the most important consideration for both the TMC and the Left-Congress alliance will be to lure the Muslim votes. The Muslim populace of the state has a long history of voting en masse for the party in power. West Bengal has an approximate 25.2 percent of registered Muslim voters. While the alliance will stop the community’s votes from being splintered into three blocs, against the hardcore Hindutva of the BJP, there is still no reason to believe that Muslims will jettison Banerjee and swing to the alliance, especially since almost every opinion poll till date has given the ruling party a majority once again.

As of now, unless the alliance manages to take a majority chunk away from the TMC, or if there is a sudden ‘wave’, the current ‘Maa-Mati-Manush’ government is set for a second term at Nabanna on the banks of the Hooghly. That would mean a long haul for the Left in West Bengal, especially the CPI(M). 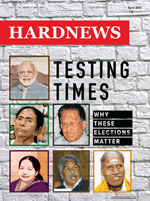