For the Winners, May is not a Cruel Month

Compulsive cynics and BJP critics are ironically pointing out at what they call ‘the big picture’. Out of a total of 882 seats at stake in these elections in four states and Puducherry, the Congress has got 139 while BJP a mere 64, they are optimistically pointing out. Even in Assam, they argue, a chunk of seats have gone to Congress defectors led by former Congress strongman Himanta Biswa Sarma, now with BJP, who fell out with the outgoing Assam chief minister, who was seen to be promoting his politically lightweight son, Gaurav Gogoi, at the expense of a formidable rival inside the party. Add to this the share of the Asom Gana Parishad (AGP), a spent force revitalised by its alliance with the BJP, the ‘BJP victory’ in Assam does not seem so overwhelming, argue the cynics. Indeed, outside Assam the BJP has won only four seats and Amit Shah should rethink before calling it a grand breakthrough across India.

However, despite the ‘big picture’ figures, and some truth in it, it is a fact that the BJP has scored its first remarkable entry into the ‘border territory’ of the seven sisters of the Northeast and has as much reason to celebrate as it did when it first entered South India with an assembly victory in Karnataka. For a Hindi heartland party, at one time isolated from the mainstream and strictly restricted to traders, money-lenders, upper castes, minority-baiters and religious chauvinists, these are signs of a futuristic agenda loaded with possibilities. It also reflects its eagerness towards ‘alliances’ though most mainstream parties kept it at an arms length in Bengal, Tamil Nadu and Kerala. All in all, the BJP show has been formidable in Assam, despite the ground reports of a close contest, and with voting crossing 92 per cent in some areas.  Besides, they have won one seat in Kerala, as first-timers, and three in Bengal. 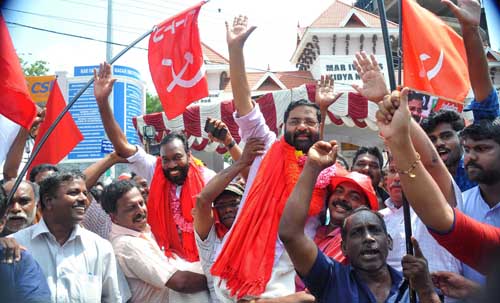 Indeed, the clean sweep for Trinamool Congress in Bengal have arrived with a mixed, rather, confusing mandate. Till yesterday, and all through the last phase of the campaign, Left and Congress supporters seemed upbeat that there is a ‘silent wave’ working against Trinamool, especially after the sting operation and widespread charges of corruption at the highest levels of the party, and the flyover collapse in Kolkata.  Indeed, with rigging, violence and muscle power ‘minimised’ by the Election Commission, and Trinamool feeling shackled by the strictness of the election regime, and a thoroughly demoralised CPI-M-led Left Front literally rising from the ashes with its ‘marriage of convenience’ with an unlikely partner like the Congress, it seemed Bengal will finally overcome its loyalty towards ‘Didi’ and vote for the ‘Jot’. Suddenly, the state witnessed an outpouring of crowd support and rejuvenation of the battered and demoralised Left cadre, especially the young, under a new party leadership, which had originally pushed for the ‘Jot’ with the Congress, despite differences with the ‘old guard’ led by veteran Biman Basu at Alimuddin Street, the CPI-M’s headquarters.

Cynics who criticised the alliance were brushed aside, as a new wave of optimism seem to have found wings in the Left party, which had been severely thrashed in both the assembly and Lok Sabha elections by the Trinmool in 2011 and 2014. To add to its pathos, not only did its musclemen and support base join the ‘extra-constitutional structures’  (originally manufactured by the CPI-M) of the Trinamool after 2011, its urban support base, among others, seemed to have shifted to the BJP, with the Hindutva party gaining almost 17 per cent of the vote share in 2014. Either ways, while even the epical Operation Barga seem to be dismantling with thousands of landless farmers losing their land given to them under the Left regime to the new ‘war lords’ of the Trinamool, and even as the local ‘clubs’ and power centres shifted to the muscle-thumping ‘para dadas’ operating in the name of ‘Didi’, the Left seemed to have lost both its imagination and its scaffoldings. That is why, the sudden street power which the ‘Jot’ provided, and the emotions it aroused, gave a simulated feeling to its supporters that a ‘silent anti-Mamata’ wave might give them an outside chance.  And even if they lose, a strong show will lead to the Left’s revival in the state and send positive signals for a broad national progressive alliance against the BJP. 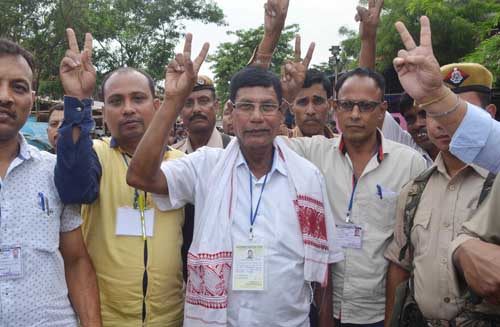 Several veteran party insiders, including youngsters in the Left movement in Bengal, who carried neither the baggage of arrogance nor the flab and stagnation of power, were convinced that if the Left regains its Left Foot Forward, it will lead to a great leap of imagination. The ravaged organisation had reasonably consolidated its grassroots structure in North Bengal, and with the success of the ‘Siliguri model’, where the alliance with the Congress became a success, it hoped to do the same in other parts of Bengal, especially in Trinamool strongholds like Purulia, Midnapur, 24 Paraganas, and in and around Kolkata. The irony is that for a party which flourished because of organisational prowess and grassroots reach, its ground level structures are still fragile and vulnerable. It just could not deliver. Besides, the Left led by CPI-M, lost half of its total strength in the assembly as compared to 2011, with the ‘Jot’ proving a cropper. Clearly, Congress votes did not translate into the Left vote bank in terms of vote share, and, as is the conspiracy theory going around in Kolkata, several Left supporters just could not gather the ‘moral high’ to vote for the Congress, their arch-enemy. Similarly, hard-core Congress supporters who hate the CPI-M reportedly chose to vote for the Trinamool where they had the choice of only a Left candidate. Hence, the Left moved further into the depressing dumps, while the Trinmool increased its numbers into a clean sweep.

Meanwhile, BJP president Amit Shah is yet again indulging in typical chest-pumping, due to the Assam victory, and seems to have completely forgotten the rout it suffered in Delhi and Bihar in the recent past. Even in the municipal elections held in Delhi recently, the BJP has suffered a drubbing. In Kerala, it has opened its account with one MLA for the first time, but will face a time-tested enemy in the form of the ruling CPI-M, despite the highest number of RSS shakhas in the state. It is only hoped that all parties will avoid the narratives of gory violence unleashed as in the past. In Bengal, its three seats means a step forward, but it also proves that most of Bengal cares two hoots for BJP’s xenophobic politics or glorified promises, even as its vote share has shrunk from 17 per cent in 2014 to 10 per cent. 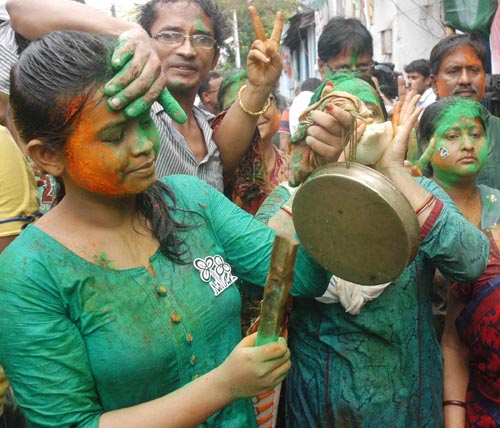 With a sundry Hindu outfit in alliance, it remained an outsider in the mainline contest in Kerala, though its vote share remains just about 10 per cent in the state. In Tamil Nadu, not one strong regional outfit, not even the AIADMK, chose to make an alliance with the BJP. For a ruling party with a majority in the Centre, with its prime minister as the magical mascot of the good times (‘achche din’), this seems a clear and categorical rebuff.

All in all, it seems a mixed and predictable bag. The LDF victory in Kerala will boost its morale despite the tragedy in Bengal. It also proves the power of unity in a faction-ridden state party with two strong political poles pulling on two sides. The DMK-Congress alliance has improved its tally, but AIADMK’s victory proves the predictable change of a ruling party every alternate election all wrong. In Assam, the Himanta Biswa Sarma factor, with his ardent followers now ‘inside’ the BJP, will continue to torment the new BJP leadership. This man will be a tough nut to crack and surely determine the future trajectory of the party, despite the best wishes of the local and central BJP leadership. In Bengal, it’s time Mamata Banerjee cleans up her act, even while the Left nurses its wounds.

Surely, it’s time to read the manifesto once again. And deliver on the small and exalted promises. Because, for her, as for the other winners, as the metaphor goes, May is not such a cruel month after all.

For the Winners, May is not a Cruel Month

Read more stories by For the Winners, May is not a Cruel Month