As vigilante behaviour over the bovine species increases in India, law enforcement officials sit back and do nothing
Abeer Kapoor Delhi

Gujarat Chief Secretary, GR Aloria in a recent interview with the Indian Express, said that these self-proclaimed ‘Gau Rakshaks’ are causing hooliganism in the State. The word hooliganism implies that those involved perform unlawful activities, but what happens when the government machinery is involved? The independent fact-finding forum 'Dalit Adhikar Manch', which looked into the flogging of four Dalits in the town of Una in the Gir-Somnath district of Gujarat, in its three-page report points to possible complicity on the part of the police. The flogged Dalit tanners sat in the station for nearly six hours; the police were unwilling to file a FIR.

The incident at Una is one of the fast-increasing brazen attacks by Gau Rakshaks (cow protection groups) all over the country from Punjab, Jharkhand to Karnataka. These groups have taken the protection of the cow into their hands and race down both state and national highways in search of cows taken for 'illegal' slaughter. After long high-speed car chases, they corner the alleged perpetrators and beat them or make them eat cow dung. All this, in many cases, under the presence of the local state police officers.

These events, however, are not going unnoticed by the Judiciary, who is seeking to clamp down on this growing unlawful and dangerous 'hooliganism'. In a judgment dated 9 May 2016, Judge Fateh Deep Singh of the Punjab and Haryana High Court ordered a CBI inquiry into the murder of Mustain, a cattle carrier, allegedly by a Gau Rakshak Dal. The judgment questions the integrity of the police who had been reluctant to investigate the case. The judge said, "Their silence and inaction is in itself reflective of their culpability -may be active or passive - which needs to be denounced outrightly." 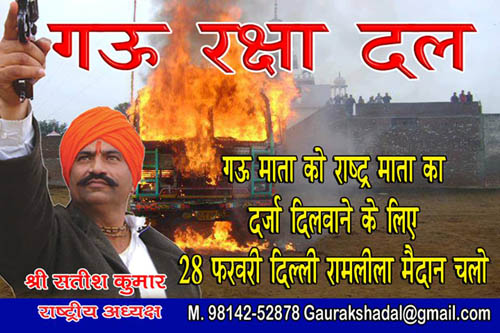 Such judgments, however, have not put an end to these incidents, which only have intensified recently. Neither have these judgments managed to dampen the zealous fan following of such outfits on social media websites. Almost, as if in defiance, the digital footprint of these groups is growing. The Facebook page of the Gau Raksha Dal Punjab (GRDP) has over nineteen thousand followers and presents a rich archive of footage of their excursions.

A video on their page gives us a peek into the way they operate; it begins with a group of heavily armed men getting into a pickup truck, as the car speeds out of the frame and onto the road a peppy Punjabi song begins to play; the young men are heavily armed with pistols, shotguns, and hockey sticks in hand as they drive furiously down the highway looking for a truck suspected of carrying cows for slaughter. When they finally spot one, the vehicle is stopped in the middle of the road. The camera fleetingly focuses on a police constable waiting on the side, as the men disembark from the truck and lunge at the truck.

The Punjabi song on loop continues “All of my close friends, with their swords in hand.”The burly young men run out and break the headlights of the truck, hit its doors and don't stop till the drivers acquiesce to their demands of following their car. Leading the car to a yard, they pull out the drivers and beat them, while other members take the cows out. These cows will be taken to Gaushalas that are owned by members of GRDP.

The protection of the cow lies at the confluence of two things: religion and economics. The religious sentiment is overwhelming, the cow is holy in scripture and essential to the Sanatan Dharma. Naveen Sharma, the head of the Bharatiya Gau Raksha Dal (BGRD), in Punjab and Haryana believes that the urge to protect the cow fills every Indian with determination and purpose.

It gives organic manure, pulls the carts and is farm implement. "Our Baba Ramdev, has shown us that every part of the cow is useful. Look at how he has managed to market the urine -gaumutra – and uses it in all his products." Sharma asserts. On the issue of Una, he believes that those who use violence should be put behind bars, but asks, “Why do you only care about Dalits being beaten, but not care for the death of a cow?” He answers himself, almost immediately, "The media is not looking for news, but spice." 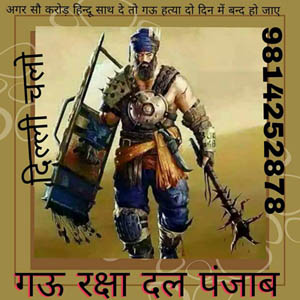 The BGRD according to Sharma has a following of over one thousand members in the region. This is a small armed militia that exists with the sole purpose of resisting the slaughtering of cows. "We travel out and stop the cows being transported for slaughter and take them to our gaushalas." Even if these cows belong to someone else?, "Yes", he asserts.

Sharma is insistent that they do nothing illegal, everything they do according to him is under the observation of the police. They are integrated within this vigilante network of violent cow protectors. It is unclear whether they participate, or are relegated to a symbol of state backing.

The incidents do not seem to abate. On July 17 a Dalit family, in Chikmagalur, Karnataka, was beaten by a gang of 40 gaurakshaks for eating beef. Videos of the violence have been put up online, the nasty face of cow vigilantism has surfaced all over the country through the internet; these incidents that have largely gone unnoticed have been caught and circulated widely. What is peculiar is that video graphic evidence is telling for the silence, complicity and ineffectiveness of the State Police.

As vigilante behaviour over the bovine species increases in India, law enforcement officials sit back and do nothing
Abeer Kapoor Delhi