Going off the beaten path, Hardnews has decided to devote its cover story to the sensational spate of grave robberies in Rajasthan. The mysterious series of crimes did not garner much attention in the national media. Only The Indian Express and a few Hindi channels reported it. We chose to follow the story to understand what was behind these tantric rituals. As we peeled off the layers of this bizarre crime, we found that it was at the crucial intersection point of different shamanic practices, aspirations and cultural narratives. At least one police officer believed that if the case hadn’t been quickly solved, it would have caused a serious communal conflagration.

The minority community, which had been on the defensive for many months, saw in the disappearance of these skulls not just a desecration of the final resting place of their loved ones but also a sinister attempt to capture their graveyards. In this environment of mutual suspicion even the slightest of provocations had the potential to upset the tenuous balance in the region.

What has come out from the police probe is not just an exponential spike in some tantric practices that demand the use of skulls, but also how this practice has become a pan-India racket.

There are organised gangs operating around the country that dig up graves to find a perfect skull, which fetches an exorbitant price in the black market. Besides being an assault on rationality and science, what was discovered from this probe was that these tantric practices are a favourite of many businesspeople who are experiencing a dip in their fortunes.

Apparently, this is an excellent time for all kinds of charlatans and tantriks to make a quick buck even if it meant propagating some bizarre rituals. This tribe of occultists draws comfort from the general political and cultural environment that has little space or patience for scientific enquiry. Political leaders have walked away unscathed during scientific congresses, claiming that these bizarre practices are part of our ancient traditions. Those who have stood up against this charlatanry have paid the price. Take, for instance, the gruesome fate of rationalist Narendra Dabholkar and the manner in which he was killed by an extremist right-wing organisation. 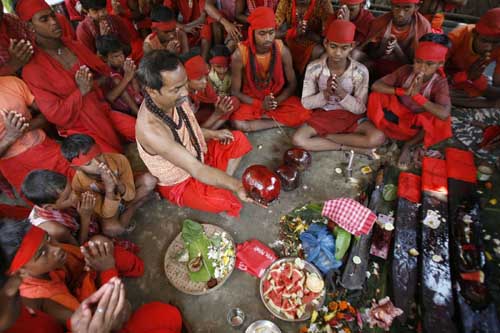 The stark reality that all of Dabholkar’s killers have not been brought to justice instils fear and foreboding amongst those who give precedence to science over superstition. These are distressing times for those with a scientific temperament, perceiving the legitimacy that archaic practices have been getting due to television channels and some political leaders. Baba Ramdev, who has turned yoga into a billion-dollar business, gets away with assertions that yoga can cure homosexuality. He also claims that the gender of a child in the womb can be manipulated.

Falsehoods, lies and over-the-top claims find greater acceptance than rigorous intellectual scrutiny in these times. The government has to step in and stop the growth of these superstitious tendencies, lest India degenerate into a country of mumbo jumbo.

The other phenomenon which we have investigated deeply in this issue is how online trolls are controlled by political parties and the manner in which these internet bullies endeavour to control the dominant narrative. There are some people in the social media space in different parts of the world who are commandeered to destroy hard-earned reputations and browbeat political opponents. These trolls are particularly nasty towards women and use vitriol that brutalises the psyche of all those unlucky enough to be caught in their crosshairs. Maneka Gandhi has set up a cyber cell to keep track of these trolls, which is a good beginning to ensure that viciousness and pandemonium do not take over the net.