Life, through the human eyes of a Djinn

In ‘Kabuko the Djinn’, novelist Hamraz Ahsan convinces us that the elements of magical realism continue to find a home in Pakistan 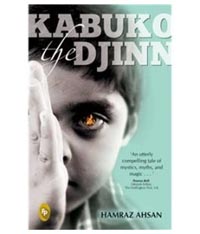 Those familiar with South American fiction, made famous by Gabriel Garcia Marquez, will smile at the mention of ‘magic realism’, a genre of literature where reality and fantasy are intertwined. In such works, magic isn’t magical but commonplace; it is simply part of the way things are, along with the regular events of human life. Spirits inhabit the world just like humans do, and influence it too; often unnoticed by the human eye, but perceived by a few wise people. Kabuko the Djinn, a new classic from Pakistan, firmly belongs to this realm.

This excerpt introduces Kabuko to the reader:

“Given your narcissism, you probably think that I am miraculous enough anyway since I am…well, who I am. For the modern man, I don’t exist, or maybe just exist in the world of make believe. Don’t act affronted, for you must admit that you are obsessed with your own stories, and by your own existence, and every other creature not approved of by your scientists or your priests is relegated to the realm of fairy tales and dreams…. I am Kabuko. Kabuko the Djinn.”

The book follows the narrative of Kabuko, who decides to experience human life in all its complexity by inhabiting Ajee Khan, a boy born in post-Partition Pakistan. He feels all the human emotions of love, sadness, joy, and lust through the body and mind of Ajee Khan, as he passes from infancy into adulthood. Yet, his destiny beckons in its own voice and he is compelled to follow.

The confidence of the writing is astounding and the plot is one of the biggest strengths of the book. Each chapter meanders through different episodes in the life of Kabuko and Ajee, but there are few coincidences. The serpent djinn that haunts Ajee’s grandmother’s house in the early chapters makes its comeback when…oops, spoilers! The book is a thriller and a romance, a folktale and a modern drama, and carries its multiple identities effortlessly.

The djinn, a mystical creature that gets a complete identity in these pages, is not the only non-human species inhabiting Earth. There are gnomes, fairies, shape-changers and doppelgangers, alternative universes and invisible worlds alongside ours. All of this is woven deftly into commonplace incidents – people disappearing and coming back, everyday misfortunes of death, poverty and boredom, such that the reader is coaxed into believing in the plausibility of it all.

There are many well-developed characters shaping the lives of Kabuko and Ajee – the snake charmer who is immune to poison, the blacksmith who is secretly an alchemist, the whirling dervish who can open gateways through his meditation and more. All of them have flaws and are self-centred, and their influence on the djinn and the boy is natural as they continue their own lives.

The writing is simple, but the book is definitely meant for adults who will readily identify with the emotions of greed, betrayal, disappointment, unrequited love, longing for things which are beyond reach, the subtle battle for power even with those whom we love the most, and how our actions come back to haunt us in surprising ways. There is also a clear sexual undertone, experienced by the nubile teenager, Ajee, or the mature Kabuko in their relationships with women, exploring how desire can dominate the psyche. The magical creatures are neither good nor evil but both, just like humans – dictated by their nature and volition.

One will find ready parallels with Ben Okri’s The Famished Road or Philip Pullman’s Northern Lights in these pages. The ending might seem abrupt, but I found it strangely reminiscent of our own lives – after all, we don’t really know when our stories will end, and one day is as good as another for the tale to cease.

Life, through the human eyes of a Djinn

In ‘Kabuko the Djinn’, novelist Hamraz Ahsan convinces us that the elements of magical realism continue to find a home in Pakistan
Sebati Iyengar Mumbai

Read more stories by Life, through the human eyes of a Djinn