One Man and His Inspiring Battle against Manual Scavenging

My ultimate dream is to see that nobody anywhere in the world has to lift human excreta, says Bezwada Wilson

When Bezwada Wilson, the convener of India’s Safai Karamchari Andolan, a movement to eradicate manual scavenging, got a call from Manila announcing that he had been chosen for this year’s Magsaysay Award, he pleaded that he did not deserve it. This was an exceptional reaction from a humble man who can never forget his schooldays when he was treated as an outcast and who has spent more than three decades of his 50 years running a grassroots movement to put an end to manual scavenging.

“I told the caller, the President of the Ramon Magsaysay Foundation, Ms Carmencita T. Abella, that there is nothing so great that I am doing that deserves the award and instead suggested that the award be given to five women who had left scavenging. I was asked to keep this good news a closely guarded secret till July 27 when they would break the news to the world,” he recalls.

Instituted in 1957, the award, considered the Asian equivalent of the Nobel Peace Prize, is named after the third Philippines president and celebrates his memory and leadership. It is given every year to individuals or organisations in Asia who manifest the same selfless service and transformative influence that ruled the life of the late Filipino leader.

Wilson has been named an awardee for “asserting the inalienable right to a life of human dignity”. “In electing Bezwada Wilson to receive the 2016 Ramon Magsaysay Award, the board of trustees recognises his moral energy and prodigious skill in leading a grassroots movement to eradicate the degrading servitude of manual scavenging in India, reclaiming for the dalits the human dignity that is their natural birthright,” the citation said. “Consigned by structural inequality to the dalits, India’s ‘untouchables’, manual scavenging is the work of removing by hand human excrement from dry latrines and carrying on the head the baskets of excrement to designated disposal sites,” it continued.

But the awardee laments that “it has become fashionable for Prime Ministers over the years to announce their resolve to abolish manual scavenging, from the ramparts of the Red Fort in the Independence Day address.” Wilson has spent 32 years on his “crusade, leading not only with a sense of moral outrage but also with remarkable skills in mass organising, and working within India’s complex legal system”.

Born in a Dalit family to scavenger parents and raised in the Kolar gold mines township of Karnataka in southern India, he saw his parents clean toilets and carry human excreta. This is what his family had done for generations as a task assigned by a society that saw them belonging to a lower social station. Wilson dared to break free from the caste-imposed shackles and was the first in his family to pursue higher education. He completed his graduation by correspondence.

Wilson is married to his work and lives in his office in East Patel Nagar, Delhi. His organisation gives a voice to those engaged in scavenging as well as their children. 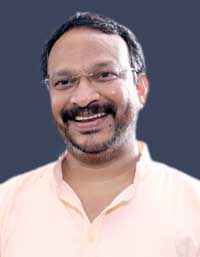 After completing high school education in 1982, he worked, scavenging localities, for almost a decade. The Safai Karamchari Andolan, a network of 7,000 volunteers across 500 districts of India, was conceptualised informally in the early 1980s. Wilson has serious reservations about the manner in which leaders including the Father of the Nation, Mahatma Gandhi, and the present Prime Minister glorified scavenging. Excerpts from an interview:

How has your life changed after getting the news that you are among the six persons selected for the Magsaysay Award this year?

They called me personally to announce the news to me and said that they had been struggling to contact me for 15 days. I was travelling and my mobile was not working. They have a procedure that they contact the selected person directly. It is highly confidential. The President of the Ramon Magsaysay Foundation has to inform the person and confirm that she is talking to Bezwada Wilson. Then, she conveys the decision of the board of trustees. They don’t send a mail as they announce it to the press directly.  I told Ms Abella that I don’t want the award. She said, “I know that. I have been trying to contact you to convey the happiest news and left a word with your office but you haven’t got back.” I told her, “There is nothing so great that I am doing.” She said, “We can’t go back on our decision.”

I offered to give them names of five women who have given up scavenging courageously. I told them to give it to the organisation.

So, you did not even tell your family?

I have no family. There is a lot of age gap between my brothers and sister. They are in the Kolar goldfields township. I am the youngest. Normally, I do not share all this with them and I have no connection with them. I last met them five years back. I left home about 20-25 years back. Sometimes, they call me to enquire about my well-being. My parents worked in the Kolar gold mines but they are no more. So did my brothers and sisters. I sleep in my office and travel to Punjab and Haryana, wherever work needs my presence.

How did you begin your crusade?

My father, mother and brother used to do manual scavenging, but by the time I was born in 1966, my parents had left the job.

In my childhood, my brother was working as a scavenger till the 1980s. I studied there from Class I to IV. Then I moved to Kuppam in Chittoor district on the Andhra-Karnataka border where I studied in a social welfare school and MMFC Government Junior College in Andhra Pradesh.

You never worked as a scavenger?

They offered me the job. I refused and tore into two pieces that card.

Why did you decide to take up the issue of scavenging?

When I returned after high school in 1982, I realised that there were a lot of problems and there was a lot of gap between my community and others. I worked in the Kolar goldfields for almost 10 years. Then I moved to Andhra Pradesh.

In the ’90s, the press began to highlight this issue. The Manual Scavening Eradication Act, a new legislation, was enacted in 1993. Our scavenging movement contributed to it though we were not consulted directly. At that time, I used to write letters to Members of Parliament and the then Prime Ministers, VP Singh and PV Narasimha Rao. I never got a reply from VP Singh but it was then that Rao made the first announcements from the Red Fort. After that, every Prime Minister announces from the Red Fort that scavenging is a national shame. It has become a fashion. Even Prime Minister Narendra Modi announced it in his first year. Because of Swachh Bharat, he does not feel the need to announce it anymore.

What is the total number of people today in India who earn a living by manual scavenging?

There are about 1.8 lakh people who still carry night soil. Those who are septic tank cleaners, sewer line cleaners and railway track cleaners are not enumerated even now. The new Act is called the 2013 Manual Scavenging Act. We tried to amend it in 2010 by the Samajik ChetnaYatra. The then Minister for Social Justice, Mukul Wasnik, called us and set up four task forces. Perhaps they found our recommendations too strong and difficult to implement but they did incorporate some suggestions from our draft. We had suggested punishment for public servants who employ manual scavengers and allow the practice to continue in their districts. 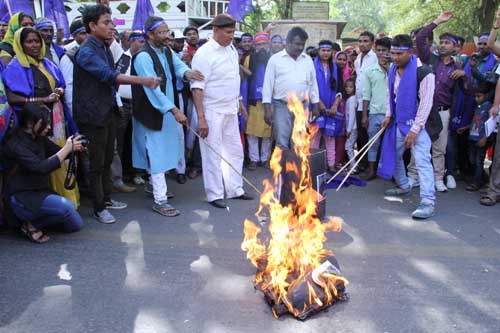 Is the new Act good?

The new Act is good compared to the old one but it is of no use if no bureaucrat is going to implement the penal provisions in the new legislation. In four years, no bureaucrat has filed a single case anywhere. Not a single person has been sent to jail for employing manual scavengers.

What is the position of those employed in manual scavenging in the social hierarchy of our country?

All of them are Dalits and 93 percent are women.

What do they get paid?

Do you see any hope for these cleaners?

Yes, there is hope and they are dumping their baskets and leaving in some places. If there is political will, we can eradicate this practice totally. The problem is the lack of political will.

Will an Indian being selected for the Magsaysay Award serve as a wake-up call for the government and galvanise it to do something positive?

Definitely, but there is an ideological problem. Caste is a major barrier in improving the lives of scavengers. Caste is the root cause of scavenging. Toilet construction is sanitation. Liberation of workers engaged in scavenging is a democratic people’s movement. These are two different things. We need to understand that manual scavenging is not going to be eradicated by blind construction of toilets. And those toilets are going to have septic tanks because there is no proper underground drainage system and ultimately people will die. It will be detrimental. Finally, people matter in democracy as people are coming out and speaking about this issue.

A few years back, you had shared with me your experience of finding evidence of manual scavenging in the Army cantonment in Ambala?

We don’t know how many scavengers are working in the Army. We found that manual scavenging is going on in Army cantonments in Ambala and Nasirabad in Rajasthan.

What is your ultimate dream?

We want to see that no human being is cleaning human excreta anywhere in the world. Bihar, Gujarat, Jammu and Kashmir, Madhya Pradesh, Uttarakhand, Uttar Pradesh are the worst but the number of persons engaged in scavenging is the most in Uttar Pradesh. We have submitted a memorandum to all the collectors. The Prime Minister’s Office, the defence minister and the railways minister were respondents in the case we filed in the Supreme Court in 2003. The case went on till 2014.

What did the Supreme Court recommend?

The Supreme Court recommended a compensation of Rs 10 lakh to the next of kin of a person who dies in a sewer line or septic tank but the problem is that they are not getting compensation.

The Tamil Nadu government challenged this in the Supreme Court, arguing that there is no reason they should give compensation if somebody dies in the sewer line. The case got dismissed in May this year.

Do neighbouring countries also face the problem of manual scavenging?

We have some data from Bangladesh and Nepal which indicates that manual scavenging is still going on.

What are your other interests?

I just read newspapers and books.

Who has inspired you in life?

I read Ambedkar and Martin Luther King. I try to understand human society through Ambedkar. It has given me the strength to fight against all forms of discrimination, not just caste.

Gandhi glorified scavenging, so I have a difference of opinion with him. He likened a safai karamchari to his mother. He said that a scavenger should be placed above his mother as she cleans him but a scavenger cleans the human excreta of the entire society and said that he hoped to be reborn in a family of scavengers. Even the present prime minister when he was chief minister of Gujarat said that scavenging is a spiritual experience.

One Man and His Inspiring Battle against Manual Scavenging

My ultimate dream is to see that nobody anywhere in the world has to lift human excreta, says Bezwada Wilson
Tripti Nath Delhi