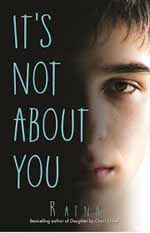 A review of Ratna Vira’s second novel, It’s Not About You, would be incomplete without abrief introduction to her debut one, Daughter by Court Order. Not just because it’s a sequel, but because a similar pattern is followed: a seemingly futile fight for justice against the rich and powerful.

Her debut novel is so raw you can almost see the bruises on the protagonist, Samaira, who is on the edge. Her husband has left her, she has two children to look after, a job to manage, and a shockingly toxic and abusive mother who has treated her like dirt from the time she was born. It doesn’t help that her mother has connections to the rich and influential Lutyens’ Delhi set. Matters reach a head when her mother and soft-spoken but hard-hearted mama (uncle) try to cheat her out of her share of the family property. Then the fight begins in earnest, with no holds barred.

I’m not saying more. If you haven’t read it, please do. While the novel desperately needs editorial pruning, it’s a page-turner. Readers who are familiar with the Lutyens’ Delhi set will probably derive vicarious pleasure too, because a fair number of the characters are recognisable (but only if you scrunch your brow and think very, very hard).

In It’s Not About You, Samaira’s bruises have almost faded. The sun is shining, birdies are singing, but her son is not talking – well, not much. She doesn’t think too much about it, after all, normal teenagers do go through phases of angst and sullenness. And then one day, a phone call from his school launches her into yet another battle against the rich and powerful. Her son has been badly injured in a fight and is rushed to the hospital. The authorities at the school are tight-lipped and refuse to reveal anything at all about the perpetrators of the violence. “She noticed how the teachers scurrying past avoided making eye contact with her. The very same teachers who used to gravitate to her just a month ago. No one wanted to talk to a mother whose child was in hospital. And certainly not about an ‘innocent fall’ in the playground.”

Samaira, her daughter and her ex-husband set about finding out what really happened. Her son is still not talking, but that’s also because he has concussion. Their detective work leads us to school bullies of the worst kind. Here’s a broad hint – Manu Sharma, Jessica Lal’s murderer. Yes, brash kids who are related to influential people and have a strong sense of entitlement. “Delhi was in part an unholy mix of influence through its political class, new money, old relationships, power equations and a lack of respect for rules; and it was this that had crept into some children in the best schools of the city. There were sensible kids and responsible parents in the most. Yet, even they were scared of the wild bunch and the influence of unruly parents.” The parents are really to blame, Q.E.D.

And so the battle against powerful, insurmountable forces begins, and it’s thrilling, of course, but the resolution is not quite as deeply satisfying as the battle in the debut novel. Mainly because, in this case, Samaira and her ex-husband are guilty of using powerful contacts too, so both sides are almost evenly matched. The novel could do without Toxic Mum (from the first novel) popping in frequently and disturbing the plot flow –a pox on her! The self-pity, too, could have been restrained. So what if Samaira is a single parent without a family to fall back on? Her ex-husband pitches in wholeheartedly when required, and it does seem like ingratitude when she frequently brings up the ‘I’m a poor, helpless single parent, I am’ refrain.

Nonetheless, what makes this book terribly interesting is its observations on Delhi’s high society, how our politicians sneakily try to control almost everything in the country, including getting on school boards and more. The long stint in hospital brings about a completely justified tirade on how posh hospitals are run as businesses and expensive tests, surgeries, et cetera are recommended not for the patient’s health but the hospital’s.

I’d say this book is a must-read. Not just for parents, but for our beloved politicians who harass us and make our lives a misery in every possible way!

Read more stories by About Delhi’s rich and famous set