The investigation into the death of celebrity perfumer Monika Ghurde is mangled in grey with many inconsistencies coming to the surface. Authoritative sources have told Hardnews that the body was first found at 10 o’clock at night on October 5 rather than the morning of October 6 as many media sources had widely reported. This contradicts the dominant narrative that has being doing the rounds in the media. The widely held belief of what transpired goes as follows: On the morning of October 6, after repeatedly ringing the bell to no response, Monika Ghurde’s househelp, called the thirty-nine-year-old perfumer’s brother, who after failing to get in touch with his sister, contacted a friend, who had a spare key to open the door. On entering the three-bedroom house, in the North Goan village of Sangolda, they knew something was wrong. They went from the living room-cum-drawing room into the master bedroom, where they found her: naked, tied to the bed, cold and lifeless.

Certain parts of this narrative do not add up. Local newspapers are questioning the timeline that has been constructed by many big media houses. Moreover, there are several inconsistencies to the case that start with Rajkumar Singh staying on the terrace of the complex, which has aluminium sheets on its floor. It is quite improbable that Singh would have stayed on the terrace for two days in the heat and the sun standing up all the time on a scalding hot aluminium floor.

According to Singh, he had entered the complex on the third, through the main gate, but allegedly no guard saw him enter. Moreover, the security-guards have said that they did not see him at any point. The gate in the housing complex remains shut during the day and one can only enter if allowed entry by the guard on duty.

Whatever may have transpired that fateful day, certain events are beyond dispute. 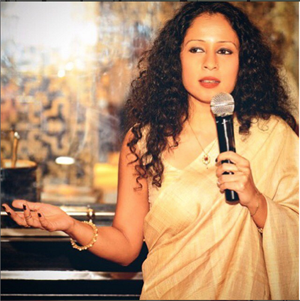 The police, on reaching her first floor apartment in Sapna Raj Valley, a high-rise, walled residential complex a stone throw away from Calangute beach, said that they suspected that the perfumer had been raped and the house had been burgled, but later said that there were no signs of the house being burgled. There also appeared to be no signs of forced entry into the house and that the murderer was someone known to Ghurde.

The news of the murder spread like wildfire, details of the gruesome ordeal also began to trickle through. There appears to be a lascivious voyeurism built into reporting of the crime, about the circumstances under which she was found. Ghurde belonged to a ‘highly affluent’ section of society as many Hindi news channels didn’t fail to reaffirm in each broadcast on her death. There has been stray and muted condemnation of this sort of slanted coverage. On Reddit, a user designst3in, who claims to have known Ghurde said, “the way the indian media are covering this story is repulsive, insensitive and disrespectful. The kind of comments here are also reflective of their attitudes. I knew her well. She was talented, determined, and a good person, undeserving of such cruelty. May the family find some peace soon.”

The murder of Ghurde has shocked and numbed many who had known her. Ghurde, was widely respected as an artist and was a researcher working with eminent historian William Dalrymple. Monika, originally hailing from Nagpur, was one of the growing number of young, independent women who chose to lead their lives alone. She had played many parts in her life, graduating from JJ College in Graphic Design, she had co-started a graphic design studio in Chennai, she had been a renowned photographer with several publications such as Elle and Vogue, a yoga instructor and her last occupation was as a perfumer. This she thought was her calling, she had travelled far and wide to learn the skills, training under famous perfumers in London. Her website, which showcases her work, has photographs, exhibitions and other work that she did. All the photographs show an highly-accomplished and skilled photographer, with an eye for the beautiful.

The investigation into her death started when the police began drawing up a list of all possible suspects. They eventually narrowed it down to Rajkumar Singh, a security guard who had worked in the residential complex till August, after which he had been fired for allegedly stealing from the residents. He had been caught when he had stolen Ghurde’s umbrella. Reports say that he had harboured ill-feeling towards Monika, and was also obsessed with her. He had been smitten by her when she had come earlier this year, to ask if there was an apartment in the complex that was empty.

Singh had been arrested by the police when he was caught using Ghurde’s ATM card, in Bengaluru. Goa Police had called for a joint operation with Karnataka Police to find the perpetrator. On October 10, the 21 year old security guard from Bhathinda, Punjab was caught at a lodge in Bengaluru.

In a video released by the police, Singh confessed to the crime saying,“I killed ma’am, I had killed her.”

While the details released by the Goa Police at a press conference chart out that Singh had murdered the perfumer, the reconstruction of events sounds positively dodgy. Riddled with questions and inconsistencies, the narrative of the police falls apart on a closer look. Singh supposedly camped on the roof of the building for two-days before making his way to the flat where Ghurde lived. He had introduced himself as the head of the security guards, and when the door was opened, he pulled out a knife and made his way inside. “ Monika Ghurde was in shock, she went into a non-responsive state,” according to them. This fact has also been questioned by local media and other channels, who say that Monika was training in mixed martial arts and boxing, and could not have just been overpowered. Perhaps the strangest revelation of all was the supposed interview that Rajkumar gave to the police where he is seen confessing to the murder and saying that he belongs to Punjab in a distinctly South Indian accent.

Police claim that Singh then took her to the bathroom and then to her bedroom, where he tied her up and then proceeded to strip her naked.  After which, he tried to make a video of her to later use for blackmailing. He allegedly, had smothered her with a pillow. Here another contradiction arises, while earlier reports said that Singh was unaware he had killed Monika, and thought she was unconscious, later reports paint Singh as a cold blooded killer, who forcefully strangled Ghurde with the intent of killing her.

The Goa Police’s reputation and integrity after the Scarlett Keeling case has been questioned, and is in the dumps. The new twists and turns that the Monika Ghurde case have taken may reveal more to the case than what has been suggested.