Creating ripples across sections, the Delhi Commission for Women (DCW) under Swati Maliwal has been voicing concerns over women’s safety and security in Delhi. The commission has also been at the receiving end of a number of allegations of corruption and misconduct. Swati Maliwal, Chairman of DCW, spoke to Hardnews on the sensitive issues and challenges she had faced in past year

How is DCW trying to improve the environment of Delhi for women?

The DCW all these years was a defunct body. If you look at the figures, in the past eight years the previous chairperson attended just one case. Before we took over 5,500 cases were received of which 3,000 were attended. We have received 9,000 new cases along with the pending 2,500 cases of the previous year. We have ensured that the first action is taken within 72 hours of receiving the complaint. DCW was not a pro-active body, we have tried to change that by taking suo motu cognisance of cases, whether it is the SK Bansal case or women’s trafficking in the GB Road area. I take a personal interest in providing my full assistance to victims of rape. In the last year, we have tried to change that mindset and transform this defunct body into a pro-active organisation.

According to the latest National Crime Records Bureau (NCRB) data, six cases of rape are registered every day in the capital. Why is such crime still on the rise?

There is a complete lack of state-centre cooperation in Delhi. No one is ready to take the onus. The DCW has been recommending to the centre to set up a high-level committee in Delhi. There is a multiplication of committees which just blame one another for the issues. We need a committee with Home Minister Rajnath Singh, CM Arvind Kejriwal, MoS Kiren Rijiju, the Police Commissioner and DCW which will coordinate and cooperate to tackle this serious situation. A Special Task Force (STF) was set up following the Nirbhaya incident with officials from the Delhi government and the centre, but in the last three years the committee met just 12 times and was finally disbanded. The responsibility for forming a new committee was given to the Lt Governor who is yet to take a decision.

The conviction rate for crimes against women in Delhi is very low – 0.5 percent. Where is the system lacking when it comes to ensuring justice for the victims?

As per Delhi Police data, over 1,000 FIRs were registered for crimes against women between 2012 and 2015. Only 146 convictions were secured, which is shameful. There are systemic reasons behind this poor rate of conviction. One is the slow nature of chargesheeting by Delhi Police. Courts have been commenting about poor and delayed investigation. We tried to find out the status of investigation and were shocked to learn that, out of 11,000 FIRs for crimes against women in 2014, by February 2016 just 50 percent cases had been investigated.

Second, Delhi has just one forensic lab. We found out that 7,000 samples were pending investigation, 1,500 samples had putrefied, making them difficult to test. Third, post-Nirbhaya, fast-track courts were set up but they are not functioning in a fast-track manner. More such courts are required. The government has written to the centre, demanding land to set up such courts, but there has been no response. I recently met Nirbhaya’s mother and she told me that sometimes she felt happy her daughter died because she wouldn’t have wanted her to go through the humiliating process of seeking justice in this country. 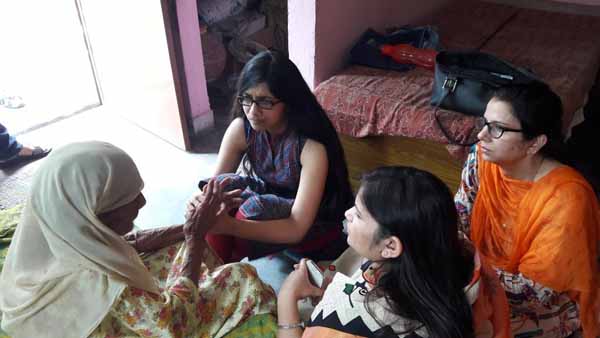 (Swati Maliwal attend an elderly women who was beaten up by her daughter. Pic credit: Twitter)

Delhi has been crowned the stalking capital of the world. How do you assess Delhi for women living in this city and for those who aspire to come here?

Recently, when a 22-year-old girl was stabbed 28 times in Burari, I met a lot of women journalists, educated and independent. They came to me and said they had started feeling afraid in the city. When I travel in Delhi at night I myself get that sense. It has become part of everybody’s psyche. Even at 8 pm, people feel scared. There is no work on the ground, the perpetrators are running free. Many women came to us and told us that their parents were asking them to quit their jobs. The brutality is increasing and it’s not just one incident, it’s a daily affair. We get numerous messages detailing such incidents in the capital. It is a national shame. The sad part is that nothing is being done to ensure justice.

DCW conducted raids on brothels around GB Road, giving the New Delhi Municipal Commission (NDMC) a 48-hour ultimatum to demolish the tehkhanas. What action has been taken?

Nobody has spoken anything about GB Road in ages, it’s taboo in the city. It is just three km from Parliament. During raids we have realised that the kingpins are not being arrested. The work is led by managers who were trafficked at one point of time but the real owners are never revealed. DCW is now digging for those records which point towards the owners of these brothels. The modus operandi of these traffickers is to hide the girls and women in tehkhanas which are designed in a way that you cannot locate them. We have been demanding the North MCD give us the plan to demolish these illegal structures. They are yet to respond so we have reissued the notice. After the third notice, if they do not respond DCW has the powers of a civil court and we will summon the NDMC commissioner. If he does not turn up we have the power to arrest him and attach his salary.

What steps are being taken by DCW to control this growing network of women’s trafficking?

We are trying to end this practice and demolish these illegal structures. We have written to the Delhi Police Commissioner and the Government of India to increase the capacities of the Anti-Human Trafficking Units (AHTU). There is hardly any AHTU in the state, Delhi has become a hotbed of trafficking and the government needs to take some serious decisions. We wrote to the labour department to get information about placement agencies. Official figures state 1,500 placement agencies and just one is licensed. We suspect over 15,000 such placement agencies within Delhi. We are a commission and we can only point out the issues and monitor them. The decision-making and implementation have to be ensured by the state and centre.

You said you are still trying to find out who the real owners are, but you recently levelled serious allegations against an unnamed Union minister and a Delhi national party leader for being involved in these sex rackets. How do you back such claims?

I have very strong indications, you can see the series of events that have unfolded. I was accused of releasing the name of a rape victim in the media, an FIR was lodged against me on charges of corruption. The fact is that we have been raising some serious questions. The moment I started getting a strong indication of involvement of these high-ranking people I started receiving messages saying ‘Stay away from GB Road’. I am going to back it up with strong evidence very soon.

The FIRs are not registered against DCW but against you individually. Is this political vendetta against the commission or are they targetting you specifically?

It is both. DCW is finally functioning and getting support across political parties. I have been receiving messages and praise from numerous leaders who might not say it openly but are praising our work. There are certain people with vested interests in Delhi who are being directly affected by our work. The FIR was filed by former Chief Secretary Umesh Sehgal. There was a complaint of molestation against him in DCW and we managed to get an FIR registered. He went ahead and complained to the ACB that I have misused my position to get an FIR registered against him. The second complainant is Berkha Singh who attended just one case in eight years, which is beyond explanation. Somewhere, this is a strong message to all such functioning commissions across the nation that they will be subdued in the same manner. We are challenging some big agencies, be it ACB, CBI, Delhi Police which is making ripples across systems, and I will keep on working.

Why do you think the CM’s name was mentioned in the FIR when the CM is not directly involved in the functioning of DCW?

This in itself shows that the FIR was politically motivated. Recruitments were done by me, not by the CM. I have done all the appointments and all procedures have been followed, none of my family members was appointed. There are 12,000 cases and we need more people to work on all of them, the LG has to give us the staff but there has been no development. We have assessed and we need 223 new people for the effective functioning of the commission, there is an immediate need to create new posts. Corruption was in the previous tenures when Rs 90 lakh was used just for conducting International Women’s Day. We conducted the same event in just Rs 10 lakh, that too we distributed cash prizes. Then CM Sheila Dikshit would issue directions to award tenders to companies of her choice and it was being followed by the then commission head.

Do you think that there has been an obstruction from the centre in your work?

We have become highly politicised, people do politics even with regard to heinous incidents of rape in this country. There are vested interests among people who have started feeling pressure because of our actions.

In the past year what coordination has been established between DCW and NCW?

The National Commission for Women (NCW) needs to start working in a pro-active manner. It is unfortunate that many commissions, including the NCW, are silent on numerous issues. Though there isn’t much coordination between the two, I am always ready to approach as many people as necessary.

Swati Maliwal, Chairman of DCW spoke to Hardnews on the sensitive issues and challenges she had faced in past year
Shibu Kumar Tripathi Delhi

Read more stories by Swati Maliwal: ‘Arrest me if you can, I will keep on working’