‘Arvind Kejriwal is opportunistic; he will say anything to get votes’: Prashant Bhushan

In an exclusive interview with Hardnews, Swaraj India Party founder Prashant Bhushan talks about his party, his disenchantment with Arvind Kejriwal and much else 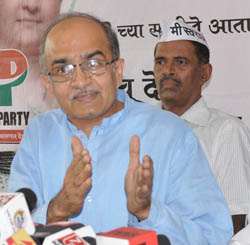 What is this alternative form of politics that you are trying to start?

Public interest broadly means the greater good for the greater number. What is public interest varies in the perception of different people. What is happening today is that political parties are acting on the basis of their own self-interest. And, as Anna [Hazare] says, basically the entire process of politics is an interplay between power and money. So, one defining characteristic of alternative politics has to be that the party does not do anything just for power. For example, the Aam Aadmi Party has degenerated to a position where everything that they are doing is only for power. Everything that Arvind [Kejriwal] says, thinks, or does is purely calibrated from the point of how to come to power, how to get more votes, etc. For example, when he went to Punjab, and the issue of the SYL [Sutlej-Yamuna Link Canal] came up he said no water from Punjab can go to Haryana, when he came to Delhi and the Chief Minister of Haryana said that no water from Haryana will be sent to Delhi then he said there should be no politics of water. What he is saying is purely from the perspective of achieving political power.

Arvind Kejriwal has no ideology, he has no policy. One of the defining features of ‘alternative politics’ is to have some definite ideology and policies. Another defining characteristic is that the party must function transparently; the third defining characteristic is that it must have robust systems of accountability within it; it should have robust internal democracy as well. We are having to call this brand of politics alternative politics because all the mainstream parties are behaving contrary to these basic tenets. They have no transparency, internal democracy, accountability or even policies and ideologies.

What would be the broad ideology of the Swaraj India Party?

Our ideology is that our party is oriented towards socialist, environmentally friendly, ecologically friendly, liberal policies; for us liberal means that there should be no unnecessary restrictions; unless some other persons are being harmed by the actions of another individual that person should be free to do whatever he wants unless it impinges on somebody else`s rights.

If it doesn’t impinge on anybody’s rights then there should be no restriction on a person. For example, on the issue of the civil code, we believe that there should be a uniform civil code because a uniform civil code regulates the legal relationships between man and woman, men, women and their children. This should be formulated on the principles of fairness, equality and equity and those principles are common to all religions, so there is no reason why a certain religion would allow a certain practice and another religion should not. When we come to the rights of the woman, we feel that you taking offence to their demanding of rights and equality is not enough to deny them their rights. Your right to taking offence is not a right.

Our party principles are guided by the principle of liberalism, we feel that there should be no restriction on what people do, or what people practise, or what they are allowed to do unless it affects the rights of other people.

What do you mean by self-government and how do you aim to achieve the ideal of swaraj?

What it means is that democracy needs to be deeper than what it is today and should not be restricted to casting your vote to elect somebody, democracy really means having the right to make your own collective decisions. This can be done at the level of the gram sabha or the level of the mohalla sabha, where you can have a physical meeting, where you can discuss and decide what you want to do and what you don’t want to do.

Aren’t these sabhas subject to the tyranny of the majority?

Obviously, no decision can be such which restricts the fundamental rights or which violates the fundamental rights of anybody. As a hypothetical example, say, people in a mohalla sabha make a decision that in their mohalla Muslims will not be allowed. That is an unconstitutional decision. No community can take a decision that violates the fundamental rights of citizens. We want as much direct democracy as possible, and feasible democracy at that. We believe in decentralisation as a means of decision-making in the sense that people of a village, block or district will make decisions that affect them and are not recipients of laws by a larger community. One way is representative democracy and another way is initiative and referendums, so you should adopt both of those things.

More often than not, referendums will positively affect decisions. If the decision to go to war on Iraq had been taken through referendum in the US they would not have gone to war. So, by and large, direct democracy is a

This is a party for a new India, what would that be?

We envision an India where people are treated equally, have fair opportunity, have education and healthcare, and society is not divided on the basis of caste and communal lines.

We envision an India where differences in culture are not used as divisive threads. We envision a society which is environmentally- and ecologically-friendly.

Why does the Aam Aadmi party never talk about secularism?

Arvind is opportunistic, he is electorally opportunistic in whatever he does. So where he feels he needs non-secular votes he will say those things on the issue of surgical strikes, etc. He needs this jingoism and it will add to his votes if he plays along with the chorus.