Art & Culture: Breaking down the walls of patriarchy

Sudesh Adhana is a world-renowned choreographer, who has won the National Film Award for Choreography. He has worked in many Bollywood films such as Haider, Udta Punjab and now Vishal Bharadwaj’s Rangoon, as a choreographer. He is trained in classical dance forms such as Chau and Kathakali, and a graduate of the National Academy of Arts in Oslo, Norway where he lives. What drives Adhana is the urge to decode and understand movement, and that is how he conceptualised his own unique dance forms. In recent times, he uses the medium to raise important questions of nationalism, sexual violence amongst many others.

In this candid interview with Hardnews, Sudesh discusses his latest project, Untamed Donkeys, where he fuses dance with protest and takes the streets of Delhi to raise the issue of growing sexual violence. What is Untamed Donkeys? How did you conceive it?

The title of the project is Untamed Donkeys. We are a team of seven male Indian dancers, who through their dance form seek to challenge the idea of a male dominated society. We use this performance with props to raise questions about the way society has been structured now, with a focus on the way the male child is conditioned and brought up. We have performed this in villages and now we have taken this to Jantar Mantar, and plan to have smaller performances all over the city. The point of this was that we wanted to take dance out from studios, from theatres and other exclusive venues to the street to raise questions that beg to be answered. Dance tells stories and that’s what we wanted to do.

What motivated me to do this was that we live in a country that glorifies male dominance and we are trying to raise awareness through art on the issue. I have lived in Norway, for many years, and recently all that we hear of are the hundreds of rape cases that take place, the growing frequency, and the visibility of these cases. Now when my friends come to India, they ask me about whether it is ‘safe to wear these types of clothes’ or ‘Is it safe to go out in the city or even go to the city at all’? I have organised many dance performances in Norway that lie somewhere on the continuum between performance and protest.

When I was working on Haider the film, as a choreographer, we thought of coming up with a male dance team. Art according to me helps in questioning issues, and raising certain problems. When the government came down hard on ‘rape’ after 2012, we expected things to change, but they didn’t. In 2014-15 and in this year there has been no let-up. We decided that we would place a mirror in front of society through our dance that will try to bring out the root cause of the problem, which often goes overlooked. 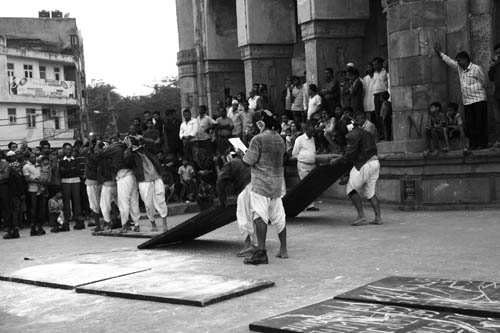 What are you trying to say through this dance performance?

We thought about questions and tried to answer them; questions like, ‘why do people form gangs?’ We found that it stems from this strange male anxiety, always wanting to have control: alone or in numbers, which is the easiest way to assert themselves. However, this phenomenon isn’t just restricted to India, it is found all over the world. Secondly, we tried to locate these tendencies in religion, which is again centred around the male. We saw this in villages where I did research for the dance performance. I had applied to the art council in Norway and the grant had allowed for the research; I didn’t want to waste it, so I looked towards the smallest articulation of community living and started from there.

In the beginning we observed people, in their day-to-day life and improvised around the way they would walk, talk and interact. The dance has to be real, it must reflect what we saw in the villages. I was also simultaneously reading books that people had written on this subject. You must realise, that this anger, sexual repression, and the eventual conflagration is a subject that is interrelated to our homes, the way we have chosen to order society. It is as much nature as it is nurture – there is a need to reimagine the way we are socialised.

Slowly the dance form began to take shape, we worked out situation, circumstance and slowly moved to bring greater structure to our routing. We worked on specific situations: If you are a drunken man, what and how will you behave? Four or five of us will sit somewhere, and suddenly break into our performance and people would stroll around, stop and watch what we are doing there. The drunken state of mind is a very unsettled one and therefore the movements, which comes in that state was the main idea of our performance. 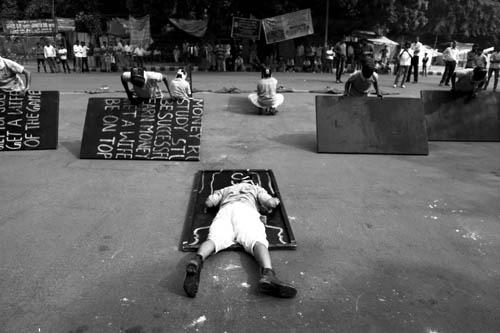 For the bystanders it was very unusual and they asked questions, ‘are you drunk? Are you mad?’ That was the reaction, which we came across. This is strange because there is no performance art in the village anymore. TVs have taken over as the main source of entertainment in villages.The earlier community activity that the villages would indulge in can’t compete with the media manufactured by the big companies, no one wants to see the nautanki walas. Earlier, the village would flock out to see the performances, they would sit together and watch it. The last twenty years or so have been devastating for the small performance artists all over India. Just like in urban settings one doesn’t eat dinner with the family anymore, but with the TV screens instead.

We did one performance, which we made for people outside the house in the village. People across occupations came to watch the performance. We requested all the men to let the women sit in front . It is men who clamour to come in and sit in the front, we requested them to move back and let the women come in front. We took them through the history of the beginnings of the male centric society, from the way it has been ensconced in religion to everyday interactions. 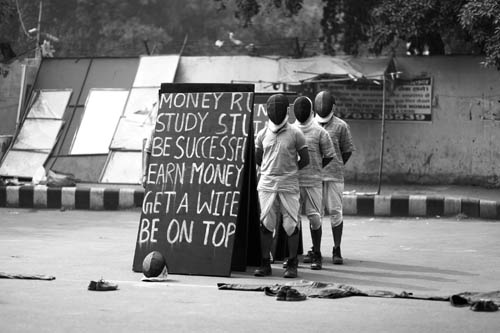 Were they were receptive to the dance? Did they ask questions?

In the end they talked about the act. We urged them to critically look at the characters of Shiva and Rama. They are the popular and strong characters for them, but we also brought out stories about their purity, their incorruptibility and whether it is as they’ve been told.

While the village was a Hindu dominant place, we went to other neighbouring villages and places in Delhi, where we performed for people of other religions as well, we found that at some point it doesn’t matter what you believe in, the problem of patriarchy touches all of these places, communities and people and that’s what has to be questioned.