The “Jan Aakrosh” rally organised by the opposition parties to protest against “demonetisation” had only partial impact in the country. The major reason behind this indifferent show was the ambivalence in these parties about what it should be called: a general strike or just a protest. Save for the Left that maintained their opposition to demonetisation and gave call for a national bandh, other parties were visibly diffident about criticising government’s move. Leader of the opposition in Rajya Sabha, Ghulam Nabi Azad cleared his stand by saying, “In the meeting of 18 opposition parties we decided to hold Jan Aakrosh Diwas not Bharat bandh.”

In Delhi, Aam Aadmi Party (AAP) that is trenchantly opposed to demonetisation hit out at the centre’s indifference to the plight of the poor. Delhi’s water and tourism minister Kapil Mishra accused the government of putting India in the league of economically devastated countries like Zimbabwe and Libya. Mishra said, “Similar demonetisation was introduced by the Soviet Union which resulted into its bifurcation into 23 different states.” Mishra was speaking at the Public dialogue organised by AAP at Central Park to lend its support to the Jan Aakrosh Diwas. The minister went on to say that the Prime Minister himself had no clue about what will happen in the days to come when he addressed the nation on November 8.

AAP demanded a rollback of the demonetisation policy. Later in the day, Chief Minister Arvind Kejriwal said that following demonetisation there has been a 10 times surge in trading of black money through investments in real estate and gold. Terming it a ‘flop scheme’ Kejriwal said, “The stubbornness of Prime Minister Narendra Modi has pushed back Indian economy by at least 10 years. The government has cheated the common man and there should be legal proceedings against those people involved in introducing this scheme.” 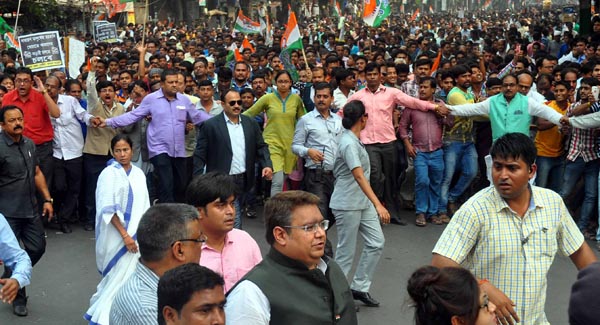 TMC in West Bengal had opposed the shutdown, but organised a protest march led by Chief Minister Mamata Banerjee, who accused the Prime Minister of misusing government machinery for personal vendetta. Protesting against demonetisation she said, “Today I take pledge, either I’ll die or live, but i will remove Modi ji from Indian Politics.” Left parties demanded measures to relieve the problems being faced by the people.

In Chennai DMK leader MK Stalin led the protest march against Modi government’s drive of demonetisation. Stalin was however taken into custody and whisked away immediately by the police.

Opposition parties in the parliament protested near the Gandhi Statue. Shiv Sena which has been upset with BJP also criticised Modi government on demonetisation. Sanjay Raut of Shiv Sena said that ending corruption is not a single party’s monopoly; people are still facing problems and standing in long queues especially in the rural areas of Maharashtra.

Congress which has been leading the opposition drive to demonetisation also protested in some states. While Congress workers were detained in Jammu while holding Jan Aakrosh Diwas another rally was held in Mumbai. Congress Vice President, Rahul Gandhi, joined other leaders of other political parties to protest in the Parliament.

Opposition parties challenged PM’s claims of maintaining secrecy in this decision by claiming some party units had been tipped about it. AAP accused the government of taking BJP in the loop on the note ban decision by releasing papers pertaining to purchase of lands in Bihar by the state unit till November 1 where most of the payments were done in cash.

The demonetisation policy introduced by the centre has faced a barrage of criticism since November 9, when the order came into effect. Monday’s protest suggests that the people are willing to give more time to the government to sort this mess.