Fear and hope in Kathputli colony

The volatile situation in Kathputli colony has eased off a lot even though Delhi Development Authority (DDA) officials continue with the relocation of the residents to Anand Parbat. The urban slum houses more than 4,000 people who are mostly puppeteers, artists, snake charmers and drummers. Those who reside in the area are a divided lot as far as the relocation is concerned. There are many who are vehemently opposed to being uprooted from their homes even if said homes are in the midst of abject squalor. Then there are those like Raju Singh who support the move wholeheartedly as it will eventually lead to living in better homes and surroundings. Singh has a shoe shop in Patel Nagar and got his documents verified on Wednesday morning. He was satisfied that the DDA had signed an agreement with him, promising to relocate him back to Kathputli colony after two years. He said, “We are happy that we are getting a written assurance from the government, it is a good move as we will get better amenities and houses than what we are living in now.” Kendi Bhatt who belongs to the Bhatt community and is a drummer by profession said, “We haven’t been forced, neither by the DDA nor by the Delhi Police to sign these documents, in fact, we are happy that the government is thinking about us and sending us to a better place.” 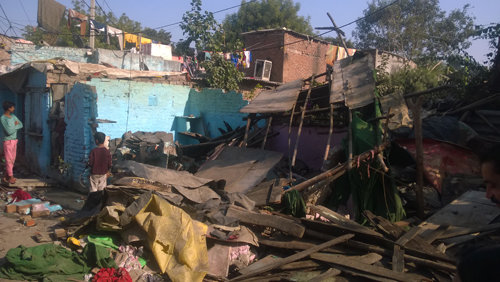 Kathputli colony has been home to these artistes for the past three decades. They have been asked to relocate to Anand Parbat by December 31. While some view the relocation as a positive change, many are suspicious of the government’s promises. Mohammad Nasir, who has a small grocery shop in the dingy lanes of Kathputli colony said, “The houses they are allotting are smaller than the jhuggi we have here, they are not giving us anything in writing and we do not trust the motives of the DDA or the government. The rates of the lands where we currently live are way too high and these big companies and people have their own vested interests. Once they shift us from here they will never allow us back on this land.” Nasir has been living in the slum for last 35 years with his family. Reminiscing about his cousin who was also rehabilitated back in the 70s he said, “My cousin was rehabilitated during the time of Indira Gandhi from Jama Masjid, he is yet to get the facilities he was promised.” 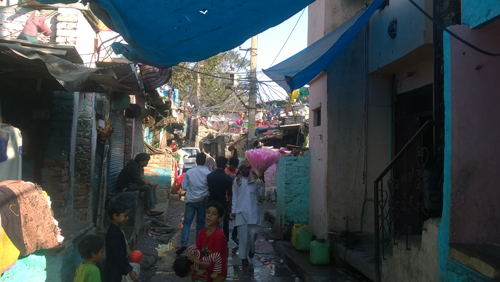 The rehabilitation is part of an in situ redevelopment project by DDA in which the residents will be relocated to a new location for a period of two years while jhuggis are replaced with multi-story buildings on the same land. To assess the relocation requirements DDA conducted a survey in 2014 of people who had their own jhuggis in the colony prior to 2010. All people who fall in the aforementioned category will be allocated apartments after the completion of the project.

“People who had migrated or started living in the slum post-2010, their claims are being examined based on the documents they are providing,” said a DDA official. “There is no tension and we are conducting the verifications smoothly as there is enthusiasm among people to shift to a better location,” said JP Agarwal, Principal Commissioner, DDA.

For over 60 hours now the slum has been cordoned off from the rest of the world by personnel from Delhi Police, SSB and CRPF. With the heavy deployment of forces conditions are seemingly under control, “the massive police deployment in the area was a mere precautionary measure, everything is fine,” added JP Agarwal. 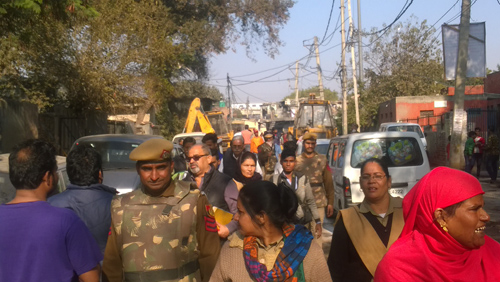 People from 12 ethnic communities live in Kathputli colony. Their major source of income comes from performing on streets, fairs and other functions. Sarvan Bhatt, who is pradhan of the Bhatt community in the slum said, “There are certain people with vested interests who have been instigating people not to relocate, these people are working in sync with certain NGOs operating inside the slum who fear that they might be left with no work if people vacate the slums.”

Kathputli colony was illegally encroached upon by puppeteers, singers, magicians and other such artisans in 1950s.Under the in-situ project, residents will have to pay an amount of Rs 1,12,000 to the DDA over a period of 10 years, after which the apartments will be made freehold.

Around 500 people have already shifted to the transit camp at Anand Parbat. Officials said that more than 300 people have been verified and they will shift within next few days. However, there is a sense of unease over the fate of people in the colony who are living without a proof of residence. What happens to them once the December 31 deadline is over?