Jalikattu: The Binaries in Tamil Culture 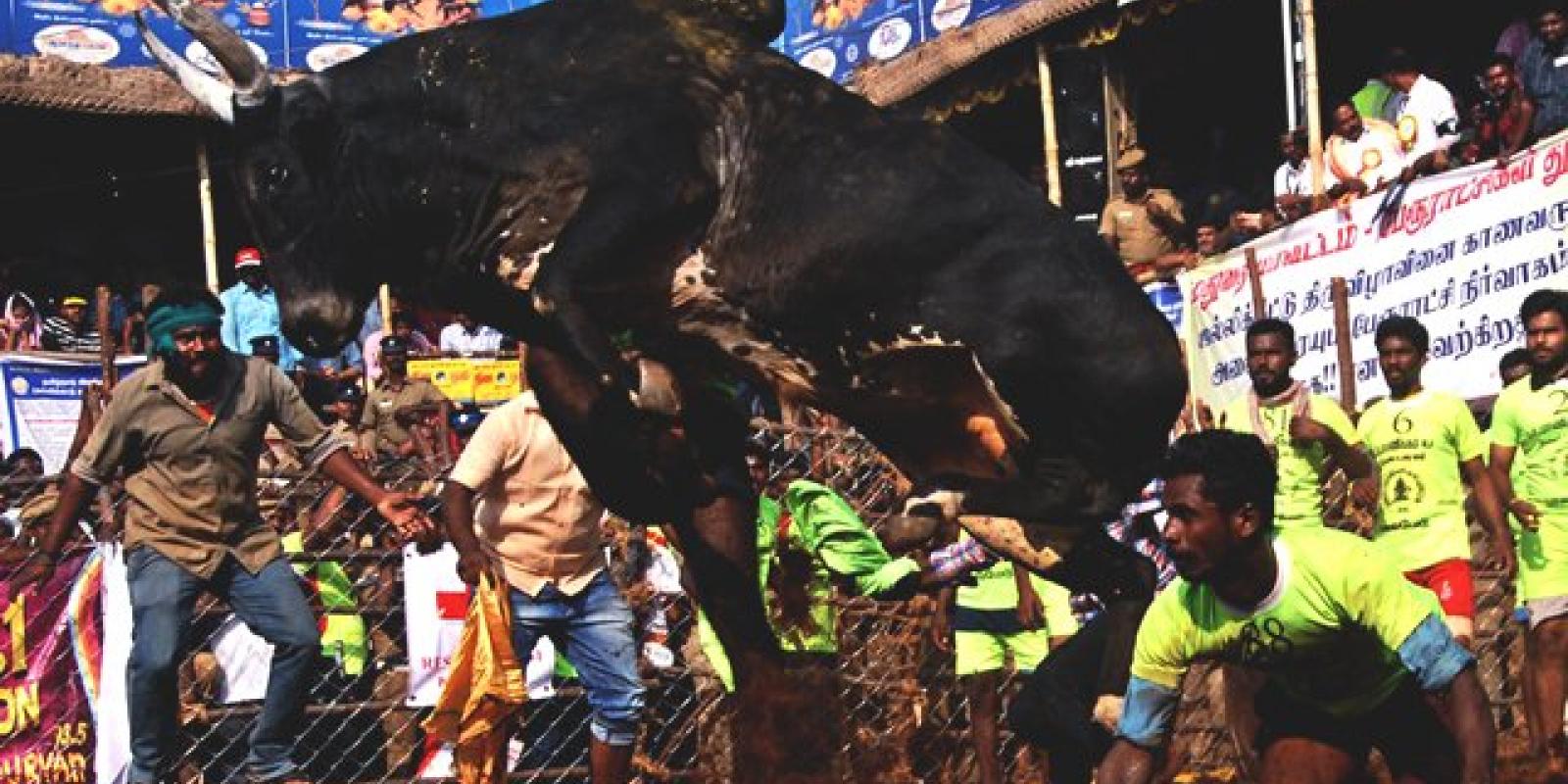 The peaceful protests that have engulfed parts of Tamil Nadu  are not only about Jalikattu, but problems that have plagued the Tamil psyche knowingly or unknowingly for a long time

Ramachandra Guha’s visit to Tamil Nadu's stupendous Chola temples also coincided with the protests unfolding over the Supreme Court’s ban on Jallikattu. This enabled him to witness and simultaneously absorb both the groundswell and rising media decibels. No such opportunity was afforded to me. I was firmly ensconced in New Delhi, administering to an ailing parent with a broken rib who alternately viewed the Tamil channels Jaya and Vijaya in order to get a handle on the protests herself. Meanwhile, we feasted thankfully on the bounties of grain, lentil, vegetables and milk on the occasion of Pongal and followed it up with  “Kanu”  rituals a day after the  Pongal celebrations.  The savoury and sweet pongals and avial (vegetable stew) of the previous day and new varieties of rice made the following day were arranged on leaves in odd sets for the birds, and the crows in particular, to feed upon.

This is an annual ritual that we carried over to New Delhi from the Tamil heartland.  Performed entirely by women, who pray for the well-being of their brothers in distant lands, part of dislocated families now spread all over the globe.  The ritual is charming; the local birds gather and a portion of their pleasure at this unexpected feast spills over into our lives and possibly contributes to the well-being of brothers worldwide. Despite the fact that women preside over kanu rituals in their entirety, I would not go so far as to call it a defining cultural moment in which Tamil girls come of age. After all, men and women feed birds in different parts of India and the world, re-affirming humanity and its connection with other species.

This time, it's not about the whimsical hegemonic North seeking to squash the liberties of the beleaguered South. As a matter of fact, calling the court’s decision as splitting the issue into a binary

In Tamil Nadu, the proverbial boiling point has been reached, completely unrelated to the customary pot of rice and moong dal placed on the fire which is traditional Pongal fare and a significant cultural marker of harvest feasts and festivities. Marina Beach has been filling up with protestors, mostly robust young men, who have ensured that teaching was suspended and colleges were shut down while celebrities from all walks of life endorsed the need to lift the ban on jallikattu.

The music stopped when national musical icon AR Rahman began fasting in protest against the ban. All respect for the Supreme Court’s ruling froze over when public figures, champions in chess and film, stood in solidarity with peaceful protestors declaring in one voice that Tamil Culture was being wiped out by the centre, yet again.

Presumably what was lingering in the public psyche was the tumult of the 1960s, when the central government policy to make Hindi the bridge language across India was resisted vigorously by the citizens of Tamil Nadu. As a result of this, the state was allowed to retain the primacy of its language and literature. The decision allowed for the resurgence of Tamil pride. In fact, for over a decade after, resistance to the imposition of Hindi was replayed in household narratives with much joy, and cited as an affirmation of Tamil cultural independence from the hegemony of the Hindi heartland.

Despite the continued regional chauvinism that languages inspire across India, the Centre’s decision to impose Hindi in schools across Tamil Nadu cannot be placed on par with the Supreme Court’s decision to ban jallikattu as a sporting event on grounds of proven cruelty.

This time, it's not about the whimsical hegemonic North seeking to squash the liberties of the beleaguered South. As a matter of fact, calling the court’s decision as splitting the issue into a binary (Jaggi Vasudev and Shiv Visvanathan) and seeing the ritual of jallikattu, performed by males in parts of rural Tamil Nadu as the defining moment when boys become men, turns the entire harvest festival of Pongal into a binary field wherein hyper masculinities  begin to devolve  from “jallikattu”  and  hyper femininities coalesce around  ‘kanu.” 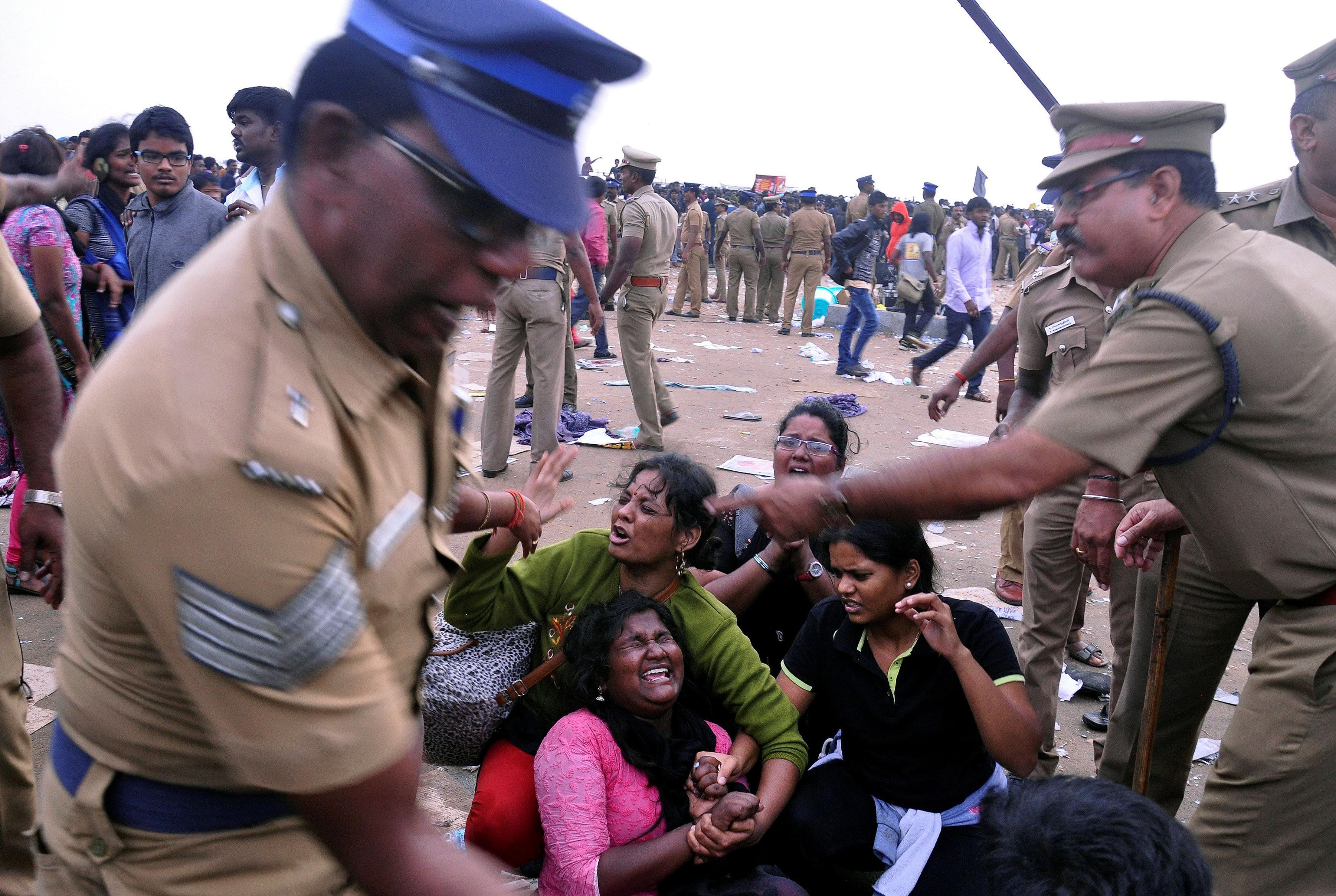 Jallikattu is an ancient practice of tying gold and silver coins to a bull’s horns. The bag of coins was claimed as a prize by whoever managed to clutch the bull by its hump and subdue it.  This must have been a thrilling event in agrarian societies when animals were being domesticated for labour purposes. In modern India, a puzzled bull is made to run through the “vadi vaasal,” a narrow street from the temple which opens out into an adjoining open field. The mouth of the narrow street is occupied by young men who try and grab its hump and then cling to it. The actual encounter between boy and beast lasts a few seconds, and then the boy is on the ground and one bull rush is succeeded by the next.

This bull, not castrated like its fellow brethren for heavy labour, is primarily an alpha stud that is used in active breeding by the family that owns him till the end of the mating season.  Bulls earmarked for breeding purposes are definitely expensive. The dairy industry has spent years in cross breeding cows with international bull bloodlines for higher yields of milk. This and the systematic killing of economically less viable cattle has decimated our innumerable native breeds. The irretrievable loss of animal and bird species, fauna and indigenous grains is a phenomenon that haunts the length and breadth of agrarian India.

To suggest that a ban on jallikattu will exacerbate the current deficit in the extant varieties of bulls (we are apparently down from 158 bull species to around seven) and lead to the eventual extinction of even these seven species is really tantamount to placing the cart before the horse. In all the years prior to 2014 ,  despite the prevalence of jallikattu, if our indigenous species of bulls have been truncated at an alarming rate, then clearly, the practice of jallikattu can no longer be projected as ideal. Again, if Indian bulls do produce A2 enzymes, (that guard against diabetes and heart attacks)there is little reason for informed cattle rearers to shy away from nurturing indigenous varieties of cattle.

Animal husbandry can only thrive with assistance from holistic and possibly more scientific options. To suggest that bulls make superior sperm only when grown men cling to its hump at harvest festivities and that a non-staging of jallikattu is an active interference with best breeding practices is both unscientific and absurd. At the same time, rationalising the need for Jallikattu is a continued affirmation of macho traditions of masculinity, endorsed further by film and aggressive commercialisation of jallikattu practices.

Nature’s schedule has always been light years ahead of human programming. Tamil masculine pride must therefore find more fecund landscapes to grow in.  As of today, burning issues continue to dog the state. Pummelled by floods and cyclones and more recently, reeling under drought, the state has had its fair share of natural calamities. Water has been a perennial problem and illegal encroachments and land grabbing mafias rule the roost. Precious hills in Madurai have been cut up for granite and exported and vast stretches of arable land lie unused. Important religious sites compete for attention with unattended and ever increasing mounds of garbage; waterbodies continue to choke and environmental degradation is the order of the day. Farmers’ suicides are on the increase and women lead less equitable lives irrespective of class and community. 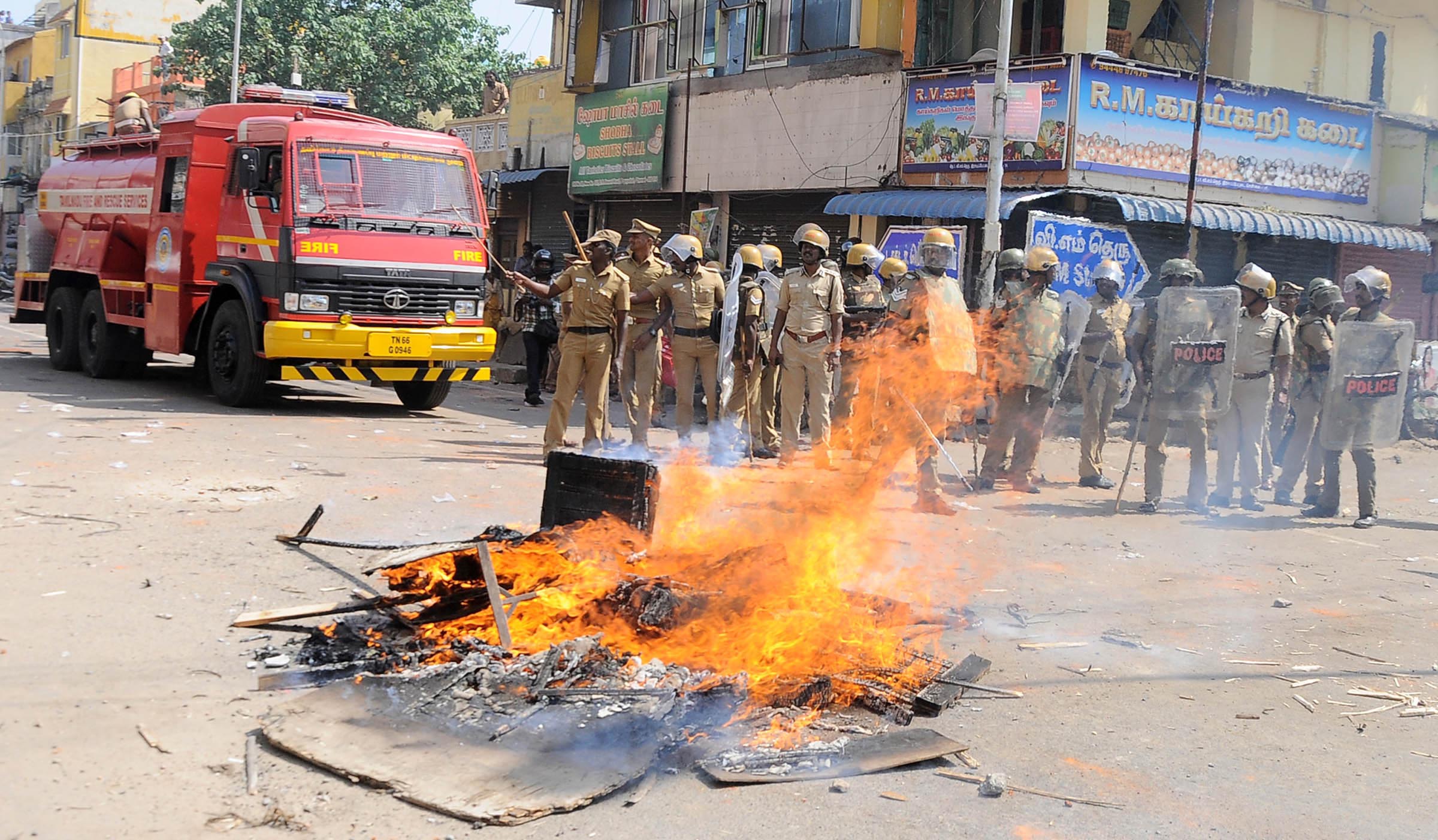 Political administrations that fall back upon populist measures and airbrush real grievances, seeking to resolve them by drumming up chauvinistic sensibilities, cannot provide solutions that are sustainable. Cultures evolve and remain forward looking while taking from antiquity the best practices in older traditions, regularly pruning and lopping away at the archaic and the vestigial. We need to ensure that animals are not subject to needless cruelty and that cattle are recognised as living beings, not as cash collaterals.

Resolutions arrived at by the highest courts in the land at the end of long deliberations impact each one of us. To take to the streets in protest is not merely an act of brinkmanship, it unravels those very safeguards we have worked very hard to foster in our collective interest.

Instead, binaries of North and south, law and chauvinism, legislation and anarchy, Hindi imperialism and Tamil rebellion, hypermasculine male and hyperfeminine, female traditions have been effectively formulated.  Under the hastily promulgated state ordinance, Pudukottai held a jallikattu wherein bystanders were injured, two men were gored to death, and the reluctant bull was transformed into an unnatural killing machine.  Meanwhile, the city of Madurai is on strike, refusing to stage jallikattus unless the right to jallikattu forever is unequivocally handed to them.

On Marina beach the protestors linger, declaring Jallikattu to be a matter of intrinsic Tamil identity and seek to immortalise the event forever.  From anger directed at the state that has failed to deliver on several counts and placards espousing separatism, violence has surfaced in exchanges between the police and the participants. With mobs damaging and setting places afire, the situation is now extremely volatile. As things stand, this is not the year of the bull. It is also not likely to be the year in which humans will finally make a few humane choices.