With less than a week to go before polling commences, the high-octane election campaign in Punjab reached a fever pitch as a new political controversy has erupted. According to credible news reports Aam Aadmi Party’s (AAP) National Convenor and CM of Delhi Arvind Kejriwal spent a night in a house which belongs to Gurinder Singh-allegedly a former member of the Khalistan Commando Force (KCF). Gurinder was acquitted by a trial court in two murder cases in 1997. Responding to the barrage of criticism, the AAP countered by accusing the Shiromani Akali Dal (SAD) and Congress of mudslinging and character assassination. Senior leaders of AAP are now planning to file a complaint with the Election Commission (EC) against SAD’s leader and Deputy CM Sukhbir Singh Badal.

Arvind Kejriwal arrived in Moga on Saturday night around 10.30pm and stayed in Gurinder’s house along with an NRI volunteer Satnam Singh who is known to be close to Gurinder. Kejriwal was returning from his rally in Zira along with his security detail and party colleagues. He left on Sunday morning around 9.30am.

Calling it a failure of the Punjab Police and the intelligence community in providing timely information, AAP Punjab Convenor Sanjay Singh said, “details of the CM’s movement are provided well in advance to Punjab Police. Why did they fail to point out this supposed association? Gurinder Singh’s name was acquitted by the court years ago, he was not even in Bagha Purana when the alleged incident took place. He was falsely charged.”

Sensing an electoral opportunity former Chief Minister of Punjab, Capt. Amarinder Singh targeted AAP at his Sunday rally by claiming that Arvind Kejriwal is a mix of both extreme right and extreme left ideologies. According to him Kejriwal’s political opportunism could throw back Punjab into the dark days of terrorism and militancy from which it has recovered. Both the Congress and SAD have been sniping at AAP’s heels for meeting with leaders linked to separatist movements.

Responding to Amarinder Singh’s allegations Sanjay Singh retorted, “Capt. Amarinder is lagging behind other contenders in his Patiala seat. The Congress and SAD is opposing the NRIs who are coming to Punjab and declaring them terrorists because they have started asking pointed questions about the abysmal development of the state, poor infrastructure, sub-standard health care facilities, dysfunctional educational system and growing crime.” 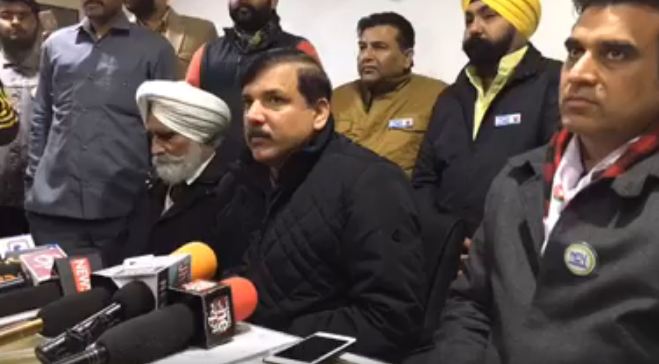 The house which once belonged to the former KCF associate is in the name of his wife Karamjeet Kaur. It has been leased out to Satnam Singh who has come to Moga from Toronto to campaign for AAP. On questions related to relations between Satnam Singh and Gurinder Singh the state convenor pointed out that the Congress party had begun their 2007 election campaign from the same house in which Kejriwal spent Saturday night.

Talking to Hardnews Moga Station House Officer (SHO) Inspector Rajinderpal Singh said, “The details of the CM’s stay in the house came from the SSP office and were cleared at the highest level. The plans and his night stay in Moga district were decided by his security detail and the party in advance. We were deployed along with DSP Ajay Raj Singh on the night of January 28. His cavalcade arrived around 10.30 in the night and left early on Sunday morning.”

Gurinder Singh who is at the center of the controversy hails from Ghal Kalan village in Moga district. He was allegedly once an active member of the Khalistan Commando Force-a module which has been designated a terrorist organisation by the Indian government. The organisation rose into prominence in the late 1980s following Operation Bluestar and the riots which followed after the assasination of Indira Gandhi. It was named in numerous assassination bids. It must be noted that Prakash Singh Badal has met with Gurinder in the past. Given this SAD's holier than thou stance seems to be a classic case of double standards.