Want to hide the cumulative failures of three years of your government? Label a liberal university anti-national and watch the magic happen

When the McCarthy era was at its crescendo, it was a routine matter for the FBI director J. Edgar Hoover to arrest civil rights activists. The justification offered was that those demanding equal rights for the black community were, in fact, Soviet spies. Almost seventy years later the same tactic is being used in universities across the country. The only difference is that ‘anti-nationals’ have replaced ‘communists’ as the object of hatred. The straw man being used in this witch-hunt is the same: that a bunch of people will somehow destabilise a nation of 1.2 billion people. The blunt instruments used for the implementation of this agenda vary. The most prominent among them being BJP’s resident goon army, the ABVP.

“Akhil Bharatiya Vidyarthi Parishad (ABVP) wants to build an ideal student movement which will work in the wider context of national reconstruction, in the field of education with a firm belief in constructive activity.” The above mentioned foundational tenet of ABVP went out the window on February 21 when a two-day seminar organised by the Ramjas College gave the hoodlums of the student organisation a pretext to unleash violence on the campus. The avowed belief of the right-wing student union on engaging in constructive activity seems like the sort of hallucination one has when high on drugs, especially when in reality its members pelt stones, grope women and strangulate professors for not subscribing to their rabid vitriol. The sort of testosterone-fueled rage that the ABVP unleashed is ample proof that what the organisation actually wants is that all students be conforming zombies who have wet dreams about how awesome India is. Debate and reason can take a hike for all they care. 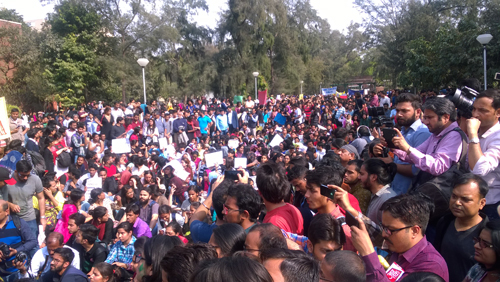 It was no surprise then that a reaction to this bullying emerged spontaneously. Gurmehar Kaur, a student of DU and the daughter of a Kargil martyr, put up a post on social media decrying what had happened. Within a few hours, the right-wing troll army was on Kaur’s case. Leading the charge was Kiren Rijiju who alleged that someone was polluting the mind of the 20-year-old. Randeep Hooda who was last seen training Salman Khan in Sultan decided that Kaur must also be trained in the fine art of being a patriot. The inevitable consequence of this haranguing was that Kaur had to leave Delhi after being fed-up by the barrage of rape threats that came her way. If Rijiju, Hooda and the Sanghi troll-army are to be believed, then India is kind of like the tower one builds while playing the game Jenga. One tweet could destabilise the whole nation and bring the apocalypse upon us. Luckily for us we have goons like the ABVP to bash in the brains of every dissenting voice and keyboard warriors like Rijiju to protect us from any calamity that Pakistan may be cooking up.

The other inevitable reaction to this spring season madness was from the larger student community. Students from Jawaharlal Nehru University, Delhi University and Jamia Milia organised a protest march on February 28. The march saw leaders from Aam Aadmi Party (AAP), Communist Party of India (Marxist), Delhi University Teachers Association, Swaraj India and Jawaharlal Nehru University Teachers Association (JNUTA) raising their voice against the growing clampdown on freedom of expression in institutions. Another instance where political opportunism and heady idealism were at their intoxicating best. Sitaram Yechury, President CPI-M addressing the students said, “our nationalism is we are Indian, not who is a Hindu? Since they cannot win this war with their intellectual skill, they want to replace it with violence.” Umar Khalid who was the patron saint of the Left for a brief while last year, speaking to CNN News said that “It's not just about Kashmir or Bastar, it's about our fundamental right on which we are not going to compromise even one bit, even if these bullies think they can silence us through their goondagardi, impunity of Delhi Police and Modi sarkar. They could not silence us last year; they will not be able to silence us this year.” As rousing as his seasonal optimism is, the truth is that it is quite easy for the sanghi brigade to impugn and delegitimize any form of resistance that arises. Gurmehar Kaur is a classic case in point.

Students and professors attending the resistance march were of the opinion that the entire controversy has been created to divert attention from the issues pertaining to the delayed justice in the Rohith Vemula case, the growing cuts on the education budget, disappearance of Najeeb Ahmad, altering of admission policy leading to seat cuts in the M.Phil and PhD programmes in universities and other student related issues.  Sunny Dhiman, a member of NSUI acknowledging the growing politicisation of college campuses said, “We are doing politics of education, this is not a movement by NSUI or AISA alone, but by the student community as a whole. The BJP government is trying to restrict the expression of students who are raising credible issues around them.”The incident has once again revived the bitter memories of February 9 when anti-national slogans were allegedly raised in JNU and a group of students including it's then student union president Kanhaiya Kumar were rounded up on charges of sedition. 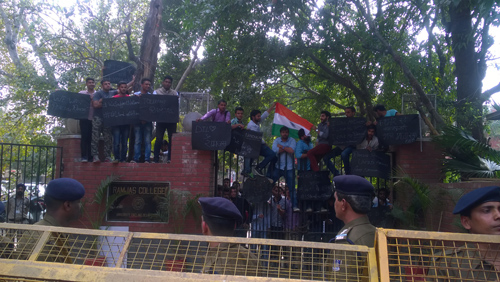 Amid the falling levels of peaceful discourse on important issues in campuses, an increasingly aggressive mob culture has started infecting institutions in the name of constructive college politics. ABVP’s gory history of violence would put the Hitlerjugend (Hitler Youth) to shame. In 2006 Professor HS Sabharwal was beaten to death by the Madhya Pradesh unit of the organisation. Its state president Shashiranjan Akela and organising secretary Vimal Tomar were charged by the CID in the murder case. In February 2008, ABVP vandalised the history department at Delhi University, protesting against the inclusion of an essay titled Three Hundred Ramayanas by the renowned poet and scholar AK Ramanujan. In 2013 Ajayan Adat, a student of the Film and Television Institute of India (FTII) was beaten up by members of ABVP and four other were injured after he refused to say ‘Jai Narendra Modi’ when asked to prove that he was not a Naxalite. In 2015 over 30 members of the RSS backed outfit stormed the campus of Kirori Mal College and stalled the screening of a documentary on Muzaffarnagar riots titled ‘Muzaffarnagar Baaqi Hai’ while misbehaving with the college professor. In 2016 Najeeb Ahmad an M.Sc Biotechnology student in JNU disappeared on the night of October 14 after an altercation with ABVP members. This is a pattern of violence that has become increasingly virulent and recurring ever since the BJP came to power in 2014. Educational spaces considered liberal bastions have been the prime target. FTII, Hyderabad University, JNU and DU are known to be left-leaning and liberal.

Given that the State is silently condoning this violence, it’s quite likely that the vandals and louts of ABVP will grow even more emboldened. As exclusivist hyper-nationalism and parochialism become the flavour of the season, the failures of this government are being cleverly swept under the carpet.