Surfing on the popular Modi wave, BJP sweeps yet another election, wins MCD polls comfortably with 182 seats shocking its nemesis AAP and Congress

Amidst loud chants of Jai Shree Ram and Bharat Mata ki Jai, Radhika Phogat walked out of the counting centre in South Delhi. She had just defeated her opponents with a huge margin of over 5,000 votes. Her victory took the count of BJP to over 180 seats in the recently contested municipal corporation elections. In what is being dubbed as the aftereffect of the Uttar Pradesh elections, the party managed to win 182 seats in the 272 member tripartite corporation and more importantly managed to thrash its rivals Aam Aadmi Party (AAP) and the Congress.

Both AAP and Congress had initially projected in their internal surveys a resounding victory on over 200 seats each, but could barely manage 44 and 32 seats as results poured in. Meanwhile, Swaraj India led by social activist Yogendra Yadav failed to even open their account in the three municipal corporations.

AAP once again reinforced their tag of sore losers by blaming the BJP of manipulating the EVMs, calling it an ‘EVM wave’ instead of Modi wave. Deputy Chief Minister Manish Sisodia, while talking to the media said, “Without poll rigging, such a win is not possible for the BJP.” Party MLA Alka Lamba has now offered to resign from her seat, taking responsibility for losing all the three seats in her constituency of Chandni Chowk. Delhi Congress President Ajay Maken has also offered his resignation from the post after the party was relegated to the third position in the elections. 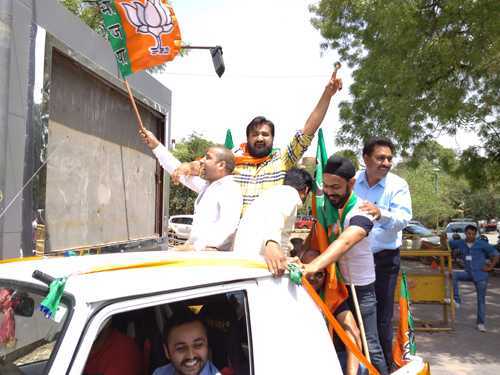 Talking to Hardnews, Radhika Phogat, who won from Safdarjung Enclave, called it a victory for the party workers. BJP has dedicated its victory to the martyrs of Sukhma attack which took place in Chhatisgarh a few days ago and kept its celebration to a minimum.

The results which are now being touted as a referendum on the two-year-old government of Chief Minister Arvind Kejriwal raises serious questions about the future of the five-year-old party. The party went all out to sway the voters against BJP, a party that was facing 10 years of anti-incumbency. The promises of ending house tax failed to impress voters which gave AAP just 44 seats, an indication that the party needs to get its house in order soon.

Seizing the opportunity, senior BJP leaders launched a scathing attack on AAP, demanding resignation of the Delhi CM giving reasons of the right to recall. Senior BJP leader Subramanian Swamy suggested that the President should dismiss the Delhi government as support for AAP has fizzled over the years. While AAP was aspiring to broaden its wings, it seems to be losing its foundations in its stronghold of Delhi. The loss will surely dent the hopes of the party of becoming a pan-India force. A short-term effect will be that their plans for Gujarat are likely to take a major hit. The strategy of confrontation and blame game does not seem to be working well for AAP anymore.

Swaraj India too drastically failed in their crusade to create ripples among Delhi’s electorate. National Convener Yogendra Yadav, accepting defeat, said that the results are a referendum on the governance of Delhi and show that people are not happy.

As AAP and Congress enter introspection mode, it's all glory for Manoj Tiwari who steered the party to a comfortable victory. The Parliamentarian is now being hailed for his decision to suspend tickets of sitting corporators which turned out to be a masterstroke and enabled the party to battle its own anti-incumbency.  BJP President Amit Shah, along with Union Minister Ravi Shankar Prasad, Rajyavardhan Singh Rathore and other party leaders, congratulated Tiwari for his efforts.