'Tawang is a beautiful part of India': Karmapa Lama

In the year 2000, a 14-year-old Ogyen Trinley Dorji or Karmapa Lama, head of the Karma Kagyu, the largest sub-school of Tibetan Buddhists, escaped from Tibet and walked across the mighty Himalayas to India. His daring escape was viewed with suspicion by some who thought that it was part of a Chinese conspiracy to disrupt Dalai Lama and the Tibetan Buddhist Exile community in India. Karmapa, who was selected through a complicated process that combined prophecy and rigorous interviews by Buddhist monks in Tibet, through the force of his charismatic personality has been seeking to assuage the misgivings and controversies that plague the exile community. Karmapa lives in Dharamshala, where Tibet’s capital in exile is located. He enjoys an excellent relationship with Dalai Lama and many see in him as the spiritual leader who will helm the 6 million strong Tibetan Buddhists. He is the third most important leader after Dalai Lama and Panchen Lama (who is under Chinese control). Last November he made his first visit to Tawang, which has been claimed by the Chinese in their long-running border dispute. He addressed a congregation under the Indian flag in the company of State Home Minister, Kiren Rijiju, and reiterated to Hardnews in an exclusive interview that “ Tawang was a beautiful part of India.” The Chinese will surely hate his remarks.Hardnews met Karmapa in Delhi in an exclusive chat and discussed with him about his passion for environmental issues and about the future of Tibetan Buddhists in exile. He informed us that the number of Tibetans-in-exile was diminishing by 5,000 every year. Karmapa also said that besides the issue of identity, growing influence of China and tight border control was also impacting the flow of Tibetan Buddhists to India. 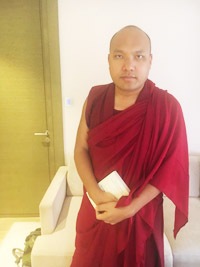 You came to India in the year 2000 when you were just 14 years old, what are your early memories of the journey that you can recall?

I don't have much to say, primarily because more unpleasant things have happened than pleasant things and probably sometimes the troubles are so much that you do not care to remember it on the spot.

You were recently in Tawang (Arunachal Pradesh), could you share with us impressions of Tawang, what was the journey like?

For me, it was memorable and a significant visit, the state government and the people of Arunachal Pradesh extended their warmest and elaborate welcome and I have been able to share some teachings with them. The visit was also significant in a sense that from the time of the first Karmapa and through the lives of successive Karmapas there has always been a spiritual connection with the people of Tawang. Recently, his holiness Dalai Lama had a successful spiritual tour. It was my first visit to Arunachal Pradesh and I have very pleasant memories of visiting Tawang, which is a beautiful part of India.

Are you surprised by the tone of criticism that has been levelled against the Dalai Lama by China following his visit to Tawang?

It's not a surprise to me, firstly, I hardly watch the television or news in that way I have nothing to compare. The other thing is that wherever his holiness Dalai Lama goes when was it that he wasn't criticised or blamed. This was not the only time that this criticism took place, any move that he makes is under scrutiny and is criticised for one reason or the other.

You have been at the forefront of environment protection, climate change, promoting green politics. How do you view the environmental destruction which is taking place in Tibet especially with the Chinese government’s move to divert rivers and its impact on countries like India?

In general, the devastation of environment and problems concerning it are a global issue and therefore it is a problem on a large scale. It is a source of concern for all the people of the world, on my part while I realise the enormity of the issue there is little one can do, and so I try my best to concentrate on monastic institutes within the Himalayan belt by bringing as much awareness in these communities as possible. Prevention is better than cure, how can we prevent further devastation? Through awareness, education and by leading local communities at least that's how it will expand to a larger scale. I am trying, but given the enormity of the global environmental issue, my contributions are just like a drop of water in a river. As for the environmental problems in Tibet, there is very little for someone like myself can do other than being concerned about it and try to bring world’s attention to it. Most important is for people of the world to realise that the environmental destruction in Tibet is not an isolated issue and does not only involves problems only for the Tibetan people. Given the geographical location of Tibet, any large scale environmental destruction is a concern for China, India or even for the whole of Asia because of interconnectedness. So it is important that awareness of this huge problem is brought to the world stage and blaming just one country wouldn't resolve it. At the end of the day the consequences will be felt by many countries and therefore all countries need to take responsibility and make some constructive initiatives.

When are you visiting London and what are your programs for the visit?

Hopefully next month. I will deliver some talk and meet some parliamentarians but it's all in one religious program.

There is a view that you have a following which goes beyond the countries and you are in a position to lead the environmental movement. Have you begun to enlarge your reach just like the Pope as the issue is becoming so problematic?

When you talk about the Pope, the Christian community is very large and a small person like me cannot be compared to the Pope. Also, I don't want to speak like politicians and say I have a very strong team and will lead people or make big movements. What’s important is that people should have some sort of awareness about what is going on in the environment. Lots of people don't know or have not even heard about global warming and we will try to provide them information so that slowly from the depth of their heart they start cherishing the environment. Tibetan and Himalayan people have a strong tradition of cherishing the environment as sacred and very important. That's why we should recall and understand the importance of cherishing the environment and not just use it as a political tool, these people who use it as a tool are just making excuses.

Buddhism is a religion of peace but there are areas of the world where Buddhists are engaged in violence, be it in Myanmar or at one point of time in Sri Lanka. How do you explain this contradiction?

I think generally violence is increasing in the entire world and not all Buddhists practice Lord Buddha’s teachings or follow exactly what they are taught. Also, there are some people who are using the religion for their own benefits largely misusing it. It is very sad and I have said that several times, I think the international Buddhist community should take some responsibility or we should convene a meeting and discuss this problem because it is unacceptable. I also heard some monks are involved in the violence and it is very shameful for all the Buddhist followers and the Buddhist community should do something about it. Sometimes, one need to make a differentiation between the religion and the people.

Tibetan people are living in exile, how do you think these circumstances will change do you think China will allow the Tibetans to return and the exile will come to an end?

Lots of things are happening in the exiled Tibetan community, which is shrinking every year. Tibetan people living in exile though have no proper identity as they are not Indian citizens neither are they political refugees. Also, they don't have proper rights and that’s why I think there is a feeling that they do not belong to this community or society. Most of these people plan to go to other countries like Europe, America or Canada. Every year around 4,000-5,000 people seek asylum and citizenship of other countries. A large number of people are also choosing to go back to Tibet, we don't know the reason but Chinese embassy is granting permission to such people who are returning to Tibet, and a number of people coming out of Tibet are decreasing every year. These days even if a few could make it to India it's a big thing. Given the current situation, Tibetan issue is going to keep dragging because China has become more influential and therefore the Tibetan issue receives hardly any recognition. In the meantime the exile community is becoming smaller and dispersing, at some point, it might disappear but the Tibetan issue cannot be completely ignored.

I think there is nothing new about it, of course, they want to control everything and get everything in their hands.

Can you move around freely in India?

I need permission to travel to anywhere in the country.

How do you see the views of Indian government towards the exiled Tibetan community, is it the same when you came to India or is it changing?

We need to thank the Indian government and the people. I have already told you that the exile community is shrinking due to one problem or the other. We carry a travel document which is also emerging as an issue. Recently, a European country (Sweden) declined to accept it as a valid travel document. We have good relations with Sweden, but lots of things are happening globally in terms of immigration and security, the Swedish government is tightening its security. In the future, it might get much more difficult when we travel outside India and we would require different permissions which are very exhausting. Since we do not have proper identity it gets difficult to secure a job or even start a proper business. We have great gratitude for the Indian government and people but it's only a second home for Tibetans, we don't have a choice but only to expect that the government will give us more support. 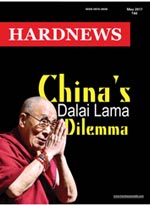