The explosion was heard and reverberations felt five kilometres away; and then, like a giant hooded cobra, a black-brown smoke plume dominated Kabul’s skyline.

On May 31 at 8.30 am, peak traffic time, in Kabul’s Chawrah-e-Zambaq (Zambaq Square), an estimated 1,500 kg of military-grade explosive, concealed inside the closed tank of a septic tank cleaner-truck, detonated. Tangles of burning vehicles and bodies clogged the heart of the city.

Although local authorities said “more than 150 were dead and over 400 injured”, the toll is estimated to be much higher considering the congestion on the roads at that time.

I know that area like the back of my hand – having passed that way twice a day, five times a week, for more than seven years during my time as Senior Adviser to former Afghan President, Hamid Karzai. The site of the blast was significant.

Around Zambaq Square, within a radius of a kilometre, are the German Embassy, NATO’s Kabul headquarters, the Indian Embassy, the gateway to the Presidential Palace, the residences of the Italian Ambassador and the Indian Ambassador, and, nearby, the American Embassy; on another feeder road,  the Iranian Embassy; on a third, the Chinese Embassy, the UN’s Afghanistan headquarters, the Turkish Embassy, the Council of Ministers Secretariat, the State Parliamentary Affairs Minister’s Office, and the Foreign Ministry.

Any of these establishments, other than the Turkish and Chinese Embassies, could have been the intended target, the most probable being the Indian Embassy, the Presidential Palace, the Foreign Council of Ministers Secretariat, and the Foreign Ministry.

The irony was the Afghan Government was getting ready to hold, on June 6. a major international conference for peace in Afghanistan: the ‘Kabul Process’.

“Since becoming President two and a half years ago, not a month goes by without my heart breaking. Between 2015 and 2016, over 75,000 Afghans were killed or wounded. Over four million of our people are refugees from violence. From the day I took office I went far out on a limb to offer an olive branch to Pakistan. It has not been taken. We want peace with Pakistan. We want to be able to trust Pakistan.  Our problem, our challenge, is that we cannot figure out what is it that Pakistan wants. What will it take to convince Pakistan that a stable Afghanistan helps them and helps our region?”

President Ghani appealed forlornly: “We again call on the Government of Pakistan to propose its agenda and a mechanism for that dialogue which can lead to peace and prosperity.”

Even as a nominee of Hizb’ul Mujahedeen leader Gulbuddin Hekmatyar watched the proceedings, Ghani went to the extent of offering to allow the Taliban to open an office in Kabul, saying:  “If there is agreement to develop a peace roadmap acceptable to both sides, we would allow the Taliban groups to open a representative office so that both sides can meet in safety” as if either Pakistan or its Taliban cohorts needed President Ghani’s permission to operate at will in Afghanistan!

The Afghan President’s professing to be unable to comprehend Pakistan’s agenda was an incisive but diplomatic expression on behalf of the Government and people of Afghanistan, the intense rage and frustration vis-à-vis Pakistan. With high-level representatives of the Pakistan government present in strength at the international conference, this meant castigation in public for Pakistan.

A brazen-faced reaction, from Pakistan Army General Headquarters, Rawalpindi, however, came through thereafter, directly and via articles in the media. Essentially, it faulted Afghanistan’s internal security and military preparedness, and took customary swipes at India, and also made contemptuous comments against Pakistan’s civilian leadership.

Significantly, Pakistan’s military leadership underlined the Taliban’s longstanding position and advised that the US government negotiate with the Taliban to bring about a peaceful resolution of the conflict in Afghanistan.

That, of course, is something the US government has consistently rejected, much to Pakistan’s displeasure; although it must be mentioned also that the US government has not notified the Taliban as a terrorist organisation, in deference to the consideration that doing so would create other complications. It would make it unavoidable to impose sanctions against  Pakistan as the sanctuary for the Taliban and for aiding and abetting them, and sanctions against Pakistan the US has avoided as a matter of cardinal policy.

The fact is that a rather serious game plan is under implementation which neither President Ghani nor the Pakistan government and military leaders have chosen to refer to.

What is underway in Afghanistan is a powerfully resourced Saudi-funded Saudi-Pakistani project. Among other things, it is animated by the Saudi motive of targeting and outflanking Iran, and has the following clear-cut aims and goals: a) The Wahhabisation of Afghanistan; b) Pakistan gaining pervasive de facto control of Afghanistan, its narcotics trade, mineral wealth, and a commanding position in relation to North-South, and West-East intercontinental routes of which Afghanistan is the geographical hub; c) Future extension of the same approach by KSA in tandem with Pakistan, into the Central Asian Republics contiguous with Afghanistan and further north; d) Similar extension in the Kashmir Valley.

The Maranjan Hill project of the KSA in central Kabul is emblematic of, as well as the key to, grasping the design of the whole enterprise. Atop Maranjan Hill, KSA is building a mosque and residential seminary with a capacity of 15,000 to impart education in Saudi-Wahhabism.

That the Saudi-Pakistani project portends to have ramifications extending over the whole region including India, with implications for US homeland security also, should be obvious to Washington.

It is to be hoped that US policy-making circles see the dangers implicit in the project, and steer clear of “greenlighting” it let alone backing it.

The new US administration would be well-advised, in the best interests of the US and its allies, to firmly deter the KSA from pursuing its grand plan of violent Wahhabisation of the whole region in and around Afghanistan, apart from desisting from doing so in the US and Europe.

Similarly, the US would be well-advised to take a very firm line versus Pakistani aggrandisement and Pakistan-based terror activities in Afghanistan and elsewhere.

What we are witnessing, however, is the incidental failure of the US to do so, either owing to the preoccupations of its leadership or conscious, deliberate US support to KSA in its policies against Iran.

It is a matter of judgment whether the US’s emphatic endorsement of Saudi Arabia, exhibited during President Donald Trump’s visit to Riyadh, and thereafter relative to the Saudi posture vis-à-vis Qatar, does not signify American approval for Riyadh’s plans in and around Afghanistan as well.

What is India to do under these challenging circumstances? Realistically speaking, we have little option other than to enhance our internal security capability to the maximum; be in readiness to counter the inevitable attacks on our homeland; step up persuasion at US policy-making level to underscore the ramifications to US security of what is underway; and alert and endeavour to cooperate with other countries directly and indirectly menaced by the KSA-Pakistan project.

A grim threat to national security confronts India. India’s political parties and mainstream media need to give issues of national security and foreign policy higher priority. Inter alia, they have to be mindful that what Pakistan with massive KSA support is doing in Afghanistan, and beyond, it is attempting also in the Kashmir Valley. 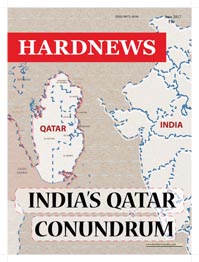