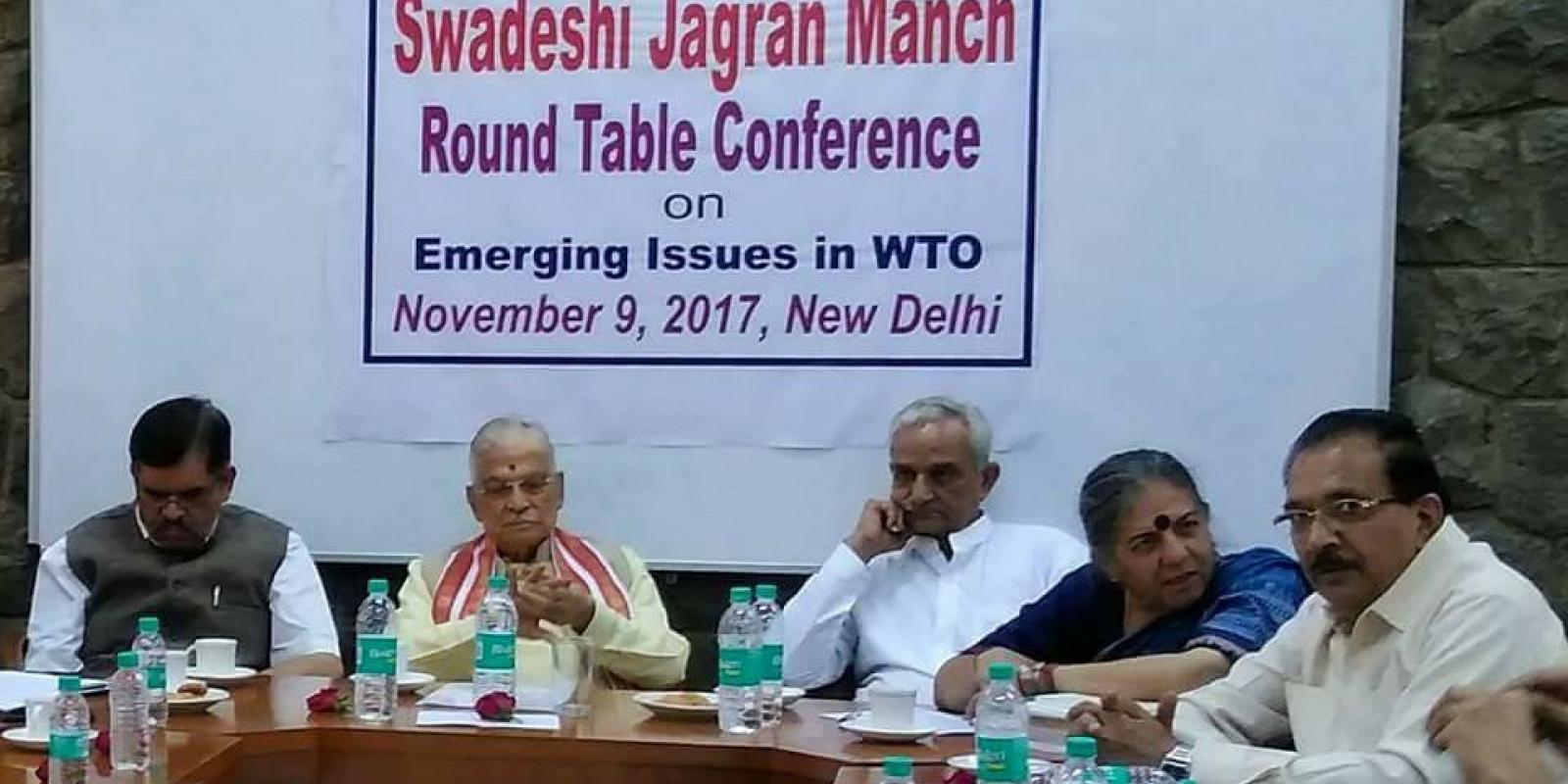 Once at the helm of opposing China, the Manch finds itself using China as an example to keep the WTO at bay, will the government listen?

At an event held in the national capital, the Swadeshi Jagran Manch, an affiliate of the Rashtriya Swayamsewak Sangh, has urged the Government of India to not let up, and continue to apply pressure on the World Trade Organisation (WTO) till the international organisation accepts their demand to eliminate the subsidies-related Aggregate Measurement of Support (AMS) from negotiations – a stand that they have long maintained. The organization believes that the implementation of the AMS will be detrimental to the Indian farmers. They want the government to push for a permanent solution on development subsidies and public stockpiling of food (for the Public Distribution System) in the forthcoming 11th ministerial conference in Buenos Aeries on December 10 and 13.

Many developing countries have grave misgivings over AMS or what is commonly called the 'Amber Box'. Earlier this year, India and China jointly submitted a proposal to the WTO that demands the removal of the unequal policy. The countries claim that the 'Amber box' has now become a prerequisite for the consideration of any other reforms in domestic support of agriculture and should not be so. In the joint submitted proposal, they call these types of deals ‘trade-distorting’ deals, “The joint paper reveals that developed countries, including the US, the EU and Canada, have been consistently providing trade-distorting subsidies to their farmers at levels much higher than the ceiling applicable to developing countries. Developed countries have more than 90% of global AMS entitlements amounting to nearly US$ 160 bn. Most of the developing countries, including India and China, do not have AMS entitlements.”

Participants at the event urged SS Ahluwalia, Minister of State, Drinking Water and Sanitation, to ensure that India must counter the efforts of countries in the European Union, US and Canada to divide the 100-odd developing countries and Least Developed Countries (LDCs) on the issue. According to SJM National Convener, Ashwini Mahajan, instead of pushing of a temporary Peace Clause, India should instead push for a permanent solution and the demand for exemption of these subsidies should be pressed. The day-long deliberation was attended by trade experts and civil society members.

US, the EU and Canada, have been consistently providing trade-distorting subsidies to their farmers at levels much higher than the ceiling applicable to developing countries.

Asserting that every country has the right to adopt special measures to curb sudden surges in the supply of agriculture produce by increasing import tariffs, the SJM said India should negotiate for the Special Safeguard Mechanism in this regard.

On the proposal to bring rules on Fisheries subsidies, the meeting expressed concern about the attempt to allow developed countries to continue with their subsidies while banning subsidies by developing countries for small-scale, traditional fishing. The organisation also opposed the proposal for investment facilitation which it said might end up in 'commitments from India on investor protection and market access’. It said that India should tread carefully on the issue of freeing e-commerce from regulation as it was a “complex and unknown area’’ which might restrict the government’s ability to regulate giant, multi-national e-commerce companies. “India should not allow the WTO to decide on regulatory rules shaping key policies on health, labour, trade, industry, agriculture, and finance. Losing all tariff revenue on e-commerce, as well as regulatory control over imports is unthinkable for a country like India.’’

The SJM also warned the government against succumbing to pressure on e-Commerce being pushed in trade negotiations in the Regional Comprehensive Economic Partnership (RCEP) and said that it will impact retailers and custom duty revenues.

Giving the example of China, it said the neighbouring country was pushing the interests of a wholesale manufacturer and supplier of Chinese goods, which seeks duty-free access using the e-commerce route.

With Inputs from United News of India