There is something very fishy about encounters in UP 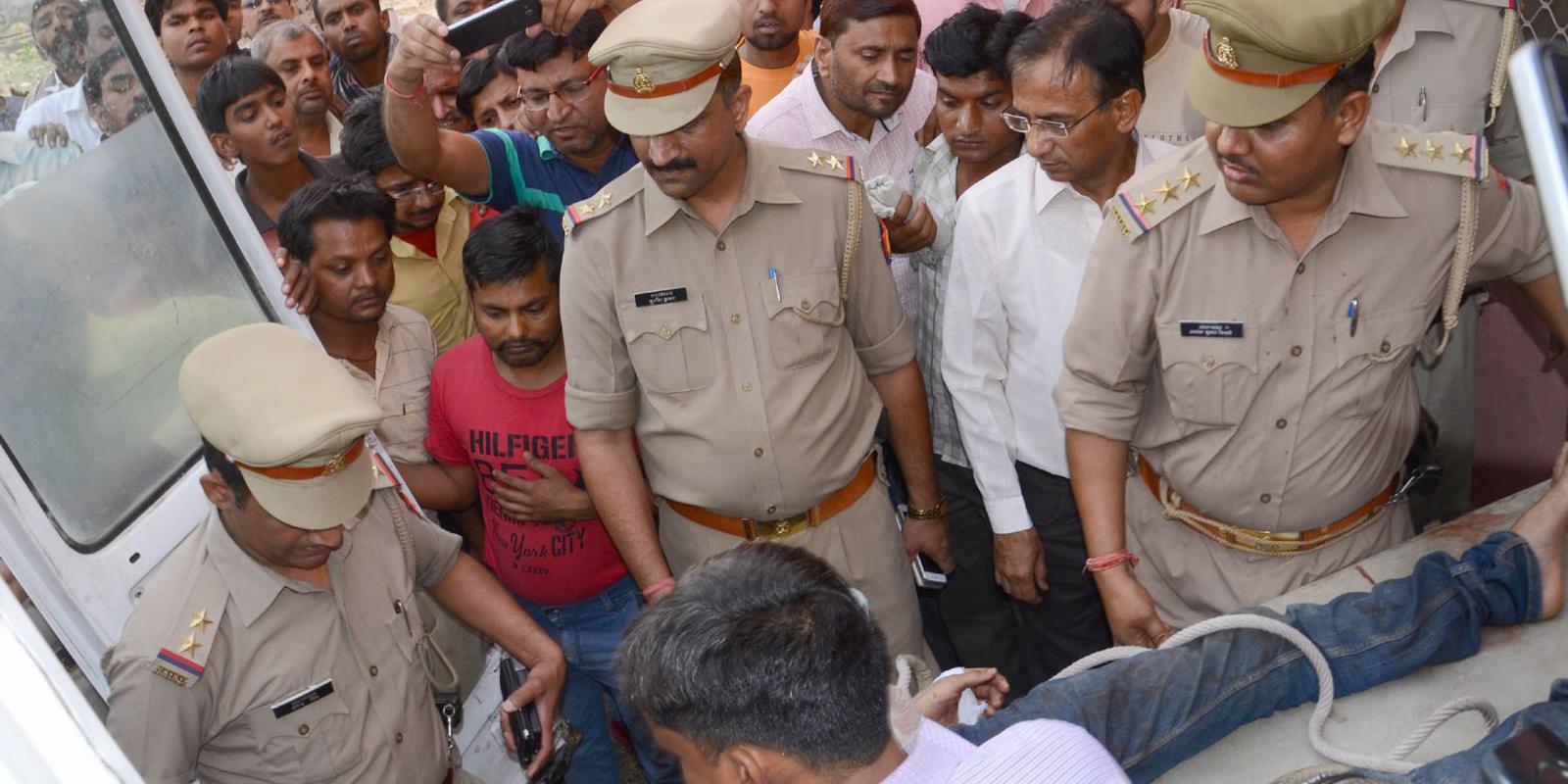 Naushad (Danny) and his friend Sarvar were killed in a shootout in Bhura, a village in Kairana, Shamli district of western UP, on July 27, 2017. There were no witnesses to the shootout and the FIR lodged by the police was filed against Danny and Sarvar. Both the lack of witnesses and the incrimination of the deceased are in clear violation of the Supreme Court directive of  2014 on encounters, which set out a list of procedures to be followed when an encounter takes place. This includes the testaments of witnesses, and mandates that FIRs against police officers be registered first. In short, the encounter raj in UP does not just violate of human rights but also all canons of justice, and does not follow the due process of law.

In the 10 months since the Yogi government took over, there have been 1,142 encounters in UP, which are now, bizarrely, being presented as evidence of quality policing. So happy is the administration with these encounters that it asked local officers to publicise the successes of these encounters in curbing crime during Republic Day celebrations.

In the first week of February alone, there have been 18 encounters and counting. Due to this spurt, there is a clear violation of the sanctity of section 154 of the CrPC, which is filing of the FIR. Hardnews investigated hundreds of FIRs with the help of Citizens Against Hate (CAH) pertaining to the encounters and has found glaring irregularities and similarities. What is apparent is that the police uses a template FIR  that fixes the absence of witnesses, and displays commonalities in the sequence of events and the strange case of how bounties are announced. In addition to the conversation on the violation of human rights, these encounters also do away with the opportunity to conduct a fair trial, not to mention the possibility of reformation or rehabilitation.

Interestingly, local newspapers are candidly reporting these encounters, but this does not seem to be making any difference to the top brass. As a news report in Amar Ujala from Muzaffarnagar said, “The district is witnessing encounters one after another and in each, there are glaring similarities. The police and culprits exchange fire, in each incident the police gets shot in the hand and the culprit in the legs. The doctors say that this is in accordance with the training given to the police.” However, it is not just where they are shot, but also that the larger sequence of events is similar.

But why this sudden spurt? As former IG of police in UP, S.R. Darapuri, says, “Encounters are an important part of the BJP’s governance method and are seen in all states ruled by them. This means that there is inordinate amount of pressure on the police to undertake encounters.” According to Rajeev Yadav of the Rihai Manch, the victims of these encounters are mainly those from backward castes or Muslims. The incidents are part of a larger political mandate to instil fear amongst those groups who have traditionally voted against the BJP. There are social causes as well; one of the biggest attacks was meted out on the gang of Muqeem Kala, whose brother Wasim was killed in an encounter after being shot through the head at point blank range, according to the post mortem report. Muqeem Kala was responsible for the upheaval in Kairana in 2016, where, allegedly, the notoriety of his gang had led to the exodus of Hindus from the town.

Another important aspect to these encounters is that they target known culprits, gangsters, dacoits, sharpshooters, and other types of criminals. The bulk of those caught in encounters are smaller criminals who have nominal bounties on their head. As an activist with the All India Jat Arakshan Sangharsh Samiti told Hardnews, “These young men should be reformed rather than shot. If you have a disease, do we kill you or help you get better?”

Lack of Due Process

Take Danny’s encounter or summary execution: at 2.00 am on July 29, 2017, a police unit left to look for dacoits, bandits, and other miscreants with bounties on their head. On receiving a tip-off, the police called for back-up and nearly 20 police officers went to arrest the notorious badmaash, Naushad, who had a bounty on his head worth anything between Rs 60,000 and 1 lakh, according to local news reports. The two units, heavily armoured, met at the Mandir crossing at Bhura and took cover in an empty spot between two houses. At 4.10 am, they saw two men, who were promptly identified by their informant, walk out of a house. The police stopped the two men, flashed their torch in their faces, and told them to turn themselves over. Defying these orders, the two men shot at the police officers, who “without paying much heed to their own personal safety”, shot back at the two assailants. The exchange of fire didn’t last very long, and when the police went to check they found the two dead.

Of the eight police officers who fired at the culprits, one of them had an AK 47. On the other hand, the two culprits walking in the dark, according to the FIR, were well enough armed to fend off a small army. They had 2 .32 bore pistols, a double barrel 12 bore shotgun, and a .315 bore tamancha (Indian-made pistol). After the encounter, according to the FIR, the police went knocking from door to door to find witnesses who would corroborate their story, but to no avail. So, the police filed an FIR against the two dead gangsters.

Six days later, on August 4, a fresh slew of charges — IPC 452 (trespassing), 376D (gangrape), 323 (voluntarily causing hurt), and 506 (criminal intimidation) — were slapped on Danny, who became one of the most wanted dead offenders in UP. These charges increased the bounty on his head. As a police officer from the state said, “Aisa nahi hai ki daal mein kuch kaala hai, puri daal kaali hai” (it’s not like there seems to be something wrong, this is all wrong).

A criminal lawyer identified an interesting aspect of the FIRs: while they vary a little bit, there are glaring similarities in each. They follow an already laid-out story, with almost identical dialogues and events. While the weapons found on each of the deceased or arrested culprits are in common, the sheer volumes of weapons found are suspicious. As a police officer exclaimed while studying the FIRs, “These men are unusually armed.” Each person is found armed with one .32 bore pistol, and 2 .315 bore tamanchas, a 12 bore shotgun, and, in many cases, a musket. Most of those killed have the same number of weapons.

Another set of commonalities is to do with the sequence of events that follows. Each encounter stays true to what UP police chief Om Prakash Singh said to the press recently, “We are not trigger-happy people. Our approach to criminals is clear — surrender or get arrested. If you fire, we will fire in self-defence. This is a police crackdown.” Faithful to this narrative, the police is always defending itself and only attacks with the beam of its torchlight, telling almost the same story every time.

The police have a checkpost set up (with the aid of a tip-off, of course), and the assailants appear on a Hero Splendor motorcycle — or,  in one case, a Maruti Swift — at that check post,. On seeing the criminals approach, the police try to blind them with their torchlight.

In addition, there are always happenstance meetings with other police officers, police vans, and Special Task Force (STF) units, which means that the police strength is always extremely large. On being found, the perpetrators run into sugarcane fields while firing at the police. After being shot at, the police cannot take it any more and chase the culprits into the fields, where an exchange of fire ensues. The height, density, and seclusion of the fields make it difficult for the police to spot the culprits, but in the end they shoot and kill one culprit while his accomplice runs away. This story is repeated across the several FIRs Hardnews studied; a story that is repeated, repeated, and repeated.

Furqan, killed in October 2017, was also chased down in a sugarcane field after his car was driven off the road. His dead body was found, after his accomplice had fled, with a .32 bore, a .315 tamancha, and a .315 musket. While these weapons are commonly found in the region, according to retired senior police officers, rarely does a culprit carry more than one gun. “It is extremely rare that a culprit will carry more than one gun,” said Darapuri, a former IG with the UP police.

The process of assigning a bounty is left to the police. Small bounties between Rs 5,000–15,000 can be set by the SP of the police, the Inspector General can set bounties of up to Rs 50,000, and the DGP can set amounts above 50 thousand. However, the process of arriving at a figure remains the prerogative of the police.

The police are notoriously known for making up the mukhbirs (informants) with the help of whom they catch these culprits. “The police knows where these culprits are and at any time they can give the order to arrest or kill; in most cases these files are with the SP or the IO and they set the bounty.” The money is sent to the account of the Station House Officer (SHO), who then has to release the money. According to local sources from the region, this is a known ruse employed by the police; they make up these informants because they know exactly where the culprit is at any point and then distribute the money amongst themselves.

An analysis of the number of criminals caught in encounters shows that the bulk of those caught had a bounty over their heads in the 5,000 to 15,000 range. While the UP police and the State government claim that they are arresting notorious and serial offenders, the bulk of those who have been arrested are at best petty, local criminals. In the FIRs accessed by Hardnews, other than Danny and Wasim, all other FIRs and those killed in encounters — such as Sarvar and Jan Mohammed — had a bounty of Rs 12,000 on their heads.

What are encounters doing to UP?

“There is a belief that Bollywood has become ingrained in our society: the hero must always win and he has to mete out justice immediately to the bad guys. This feeling feeds the bloodlust in people and demands executions, encounters, and bullets in the heads of young men,” said an activist in Shamli over the telephone. “The rapid encounters in UP are being lauded and are received favourably by the citizens of the state,” he continued.

Encounters aren’t new to UP; they were first used by VP Singh in 1980 to tackle the rampant dacoity problem in the state. While successive governments have allowed for encounters, it is largely left to the political will of the regime. “It’s been the BJP governments that use encounters to further caste-ist and communal agendas,” said a member of the Rihai Manch, a human rights group from the state. “If you are to look at the statistics of those who have been killed in these encounters, you find that out of say 15 or 17, 14 will be people from the backward castes and/or Muslims. This is also political and driven by electoral compulsions. These strong elements, may it be a Muqeem Kala or other gang leaders, they also sway votes. But if you kill them or break their bastions, then they can’t garner support for the Opposition.”