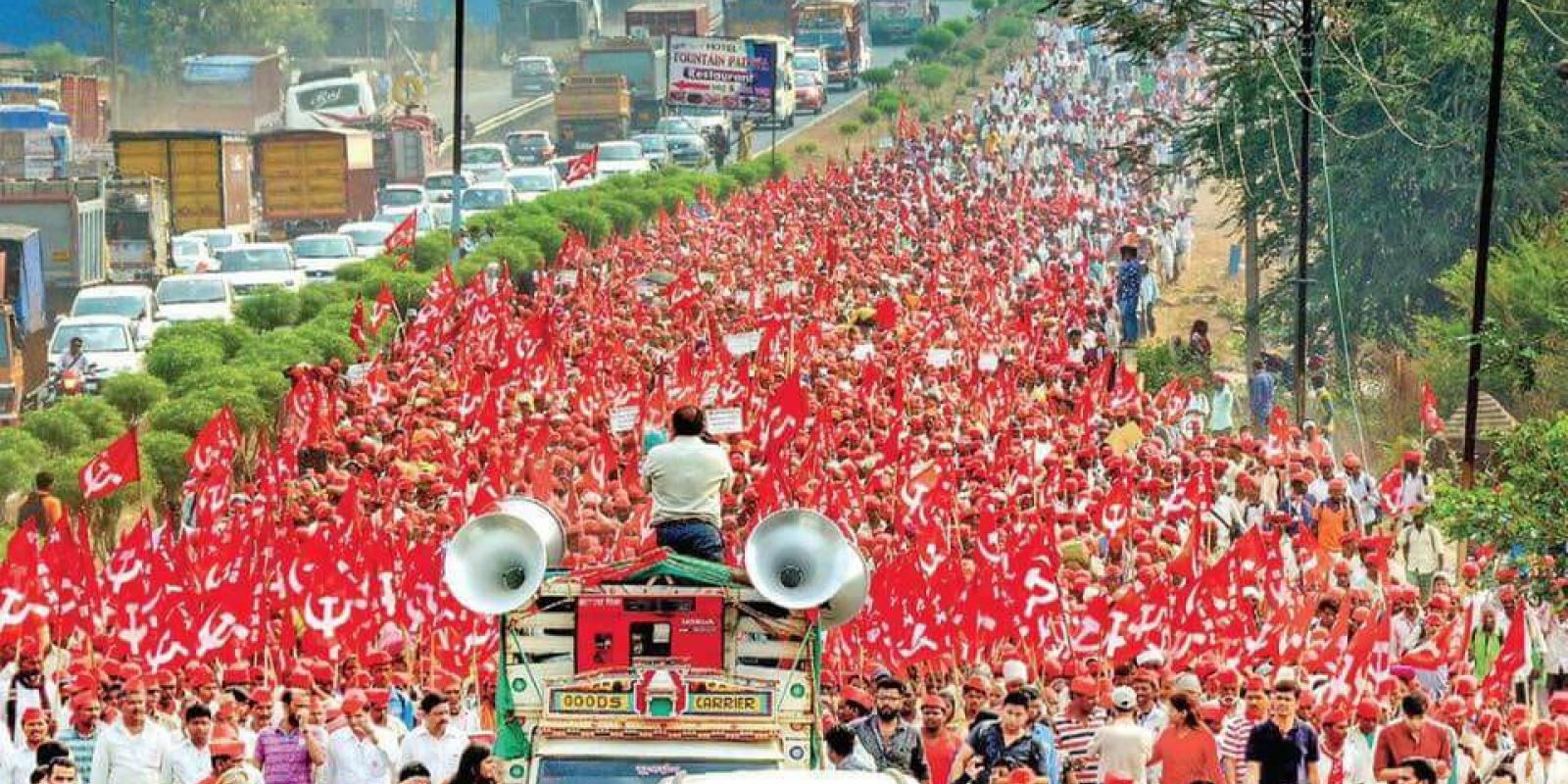 Nearly 30,000 farmers from across Maharashtra started a 180 km-long march from Nashik on March 6 to press for their demands on a range of issues, like a complete waiver of loans and power dues and implementation of the MS Swaminathan Committee report on Minimum Support Price (MSP). They walked silently through the night on March 11, carrying red flags, through Mumbai to avoid causing chaos for students who were supposed to appear for board exams on March 12.

They reached Azad Maidan around dawn and are perched there since. A group of representatives are slated to meet Chief Minister Devendra Fadnavis at Vidhan Bhavan around 2 pm. The Maharashtra state government has decided to appoint a six members committee to look into the farmers demands.

While speaking to Hardnews, Vijoo Krishnan, joint secretary of All India Kisan Sabha (AIKS), said, “Farmers have travelled a long way to reach Azad Maidan. Surely people are tired but there’s a lot of excitement and energy among the farmers here. People drawn from various sections of society, including dalits, and poor people have continued their journey for the last six days. There are a lot of sacrifices these people have made.”

Meanwhile, support for the farmers’ agitation has poured in from various parties in the Opposition, including NCP, MNS, Congress and also Shiv Sena which happens to be part of the BJP-led state government in Maharashtra.

The protest march has drawn as much attention for its show of strength as it has done for being considerate. Newspaper reports have oft repeated that the protesters have taken extra care to avoid disruption for students who are slated to appear for board exams. Krishnan said that the government will have to pay heed to their demands because it is non-violent and disciplined in nature.

Ajit Navale, AIKS’ Maharashtra secretary, told a news website, “The days of living on assurances have passed. Unless the government gives us something concrete, commits itself in writing, we will march towards the Vidhan Bhavan.” Navale, along with Jiva Pandu Gavit, Narsayya Adam and Ashok Dhawale, is part of the 11-member delegation that has gone to meet Fadnavis. So far, the farmers have asserted that they will relent only when all their demands have been met.

The farmers are demanding a complete loan waiver, pension, fair price for farm produce, implementation of the Swaminathan Commission’s recommendations on minimum support price, and compensation for hailstorm-affected farmers, among other things.

Meanwhile, support for the farmers’ agitation has poured in from various parties in the Opposition, including NCP, MNS, Congress and also Shiv Sena which happens to be part of the BJP-led state government in Maharashtra. The Shiv Sena had recently announced its decision to break rank with the BJP’s National Democratic Alliance and go it alone in the upcoming general elections. Even as the massive agitation is being led by the CPM’s farmer wing, AIKS, it has given the Opposition an opportunity to close in and isolate the BJP.

Farmer suicides have increased in the last two to three years. The government had announced a Rs 34,000-crore farm loan waiver last year but a lot of the protesting farmers were not covered under it. It is believed to have impacted only a handful of distressed farmers at a time when crisis loomed large in most households dependent on agriculture.

The farmers have said that the next course of action will be decided on the basis of the outcome of the farmers’ meeting with Fadnavis.