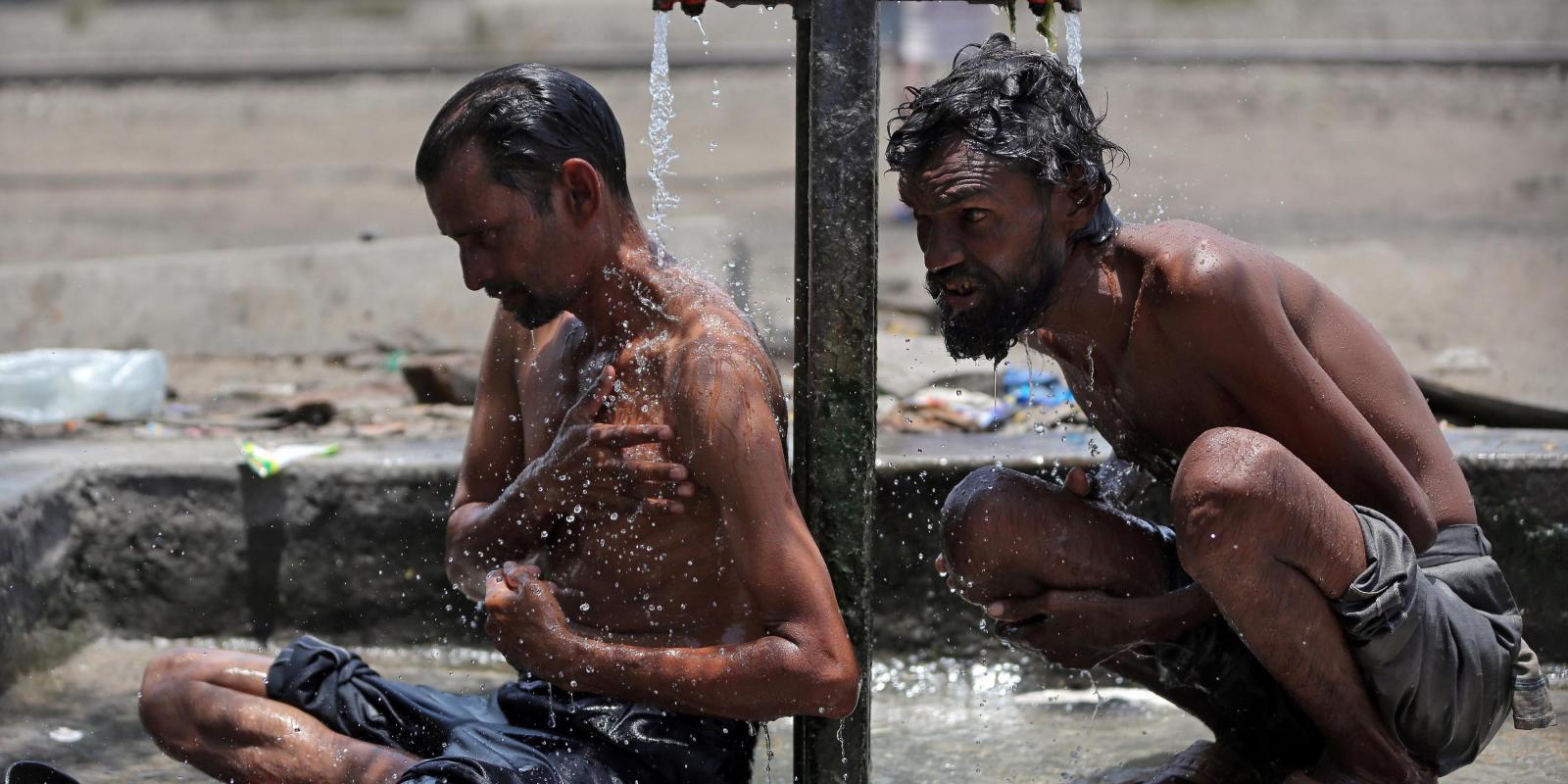 Even as the NDMA reported a drastic reduction in the number of heatwave-related deaths, there is a sense that with climate change on the rise India’s silent disaster is going to get worse in the future, and to tackle it there's a need to look for long term measures

For India, heatwave has been its recurrent calamity that has killed several people in the past two decades. According to the National Disaster Management Authority (NDMA), a total of 22,500 people died between 1992 and 2015. As the awareness about climate change has increased, there has been a simultaneous rise in focus on heatwave, more so because in countries where heatwave used to be an aberration are experiencing rising temperatures more and more frequently. In case of India especially, the tipping point came only in 2015 when 2,422 deaths were reported across the country in a year. The episode made way for ominous headlines in the international media that dubbed it then as the fifth deadliest heatwave in the world history.

Since then, the situation on the ground has improved. According to the data collected by the NDMA, the number of deaths came down from 2,422 in 2015 to 1,111 in 2016 and 222 in 2017. At the NDMA, the effort on the ground has been mobilised by an enthusiastic, middle-aged man whose arrival at the national organisation coincided with an increased focus on the calamity. Since 2015 until now, Anup Kumar Srivastava has been in charge of tackling heatwave and over time, has come to be known as an in-house expert on the matter.

According to him, one of the biggest challenges at the time they started out was that the government did not recognise heatwave as a disaster. “Since its impact is not visible immediately like other disasters, it is often dubbed as a ‘silent disaster,’” says Srivastava. Also, prior to 2006, there was no central body that would mobilise efforts to draw up an action plan or guidelines to manage a disaster. The ball used to be in the state government’s court to muster a response. The 2004 tsunami was a wakeup call for India’s disaster preparedness. A year later, the Disaster Management Act was passed, which envisaged the formation of the NDMA and India’s first disaster management authority was established in 2006. At the time when a list of the disasters that would come under the purview of the NDMA was drawn up, heatwave was overlooked because it did not look like a disaster. Today, even though the NDMA recognises heatwave as a natural disaster, the Central government doesn’t.

An action plan that works
At India’s Met department, Dr Mrutyunjay Mohapatra, the scientist who is responsible for overseeing the monitoring of the mercury scale, says that the success seen by the action plan can primarily be attributed to technological advancement. “The first and foremost factor for reduction in deaths is detection. Once you give an early warning, then other measures like preparedness and mitigation can be put in place. For detection, you need a good observation system. Over the years, the performance of our observation system has improved with technological advancement. Now we are able to predict temperatures for 10 days. We also provide seasonal forecast and extended forecast. And that has made a lot of difference,” he explains.

The NDMA, on the other hand, has on its part assisted the state governments in making action plans, guidelines and has brought together various stakeholders on a platform. Dr V Thiruppugazh, joint secretary of India’s disaster management body, says, “What the NDMA has done to arrest the figures is bring together various stakeholders like state governments, local bodies, NGOs, etc under the same roof and have them exchange their best practices. It has worked wonders because that is what crafting a response towards a disaster is about — co-ordination amongst various bodies of the government.”

With the rise in global temperatures, a lot of countries in the world which were not heatwave-prone are facing extreme temperatures. At the beginning of this year, New Zealand and Australia sweltered in 46-degree temperature. The media told stories of how New Zealand had registered the hottest January in the country’s history, while in Australia, reports of how the sun was melting the asphalt on roads went viral. Unlike these nations, India, with a tropical climate, experiences heatwave every year. Therefore, for India the challenges are more diverse and not just limited to bringing down heat-related deaths —  the impact of climate change is being felt increasingly as the number of states/cities that earlier experienced heatwave days is rising, as is the maximum temperature recorded every summer.

The alternative view
Even though the reduction in the number of deaths has been welcomed and the efforts undertaken by the NDMA to help state governments develop an effective action plan have been lauded, there is a view that the numbers cited by the government agency may be far from reality. Dr Dileep Mavalankar, dean of Indian Institute of Public Health in Gandhinagar, who is credited with developing the country’s first heat action plan for Ahmedabad in 2013, says, “The death figures cited by the government are always under-reported because the process used by them to ascertain the cause of the death is flawed. If a person is suffering from other health issues, heat may exacerbate the problem and cause death. Most of such cases go unnoticed because the death is said to have been caused by that particular health issue, and not heat,” says Mavalankar.

Implementation is another issue that Mavalankar thinks is not up to the mark. “Having a heatwave action plan in place does not ensure that its benefits are going to trickle down to the bottom. Often at the state level, there is little clarity on who is responsible for implementing it,” he complains. Preparation for a bout of heatwave involves making sure in advance that there is ample electricity and water supply, hospitals have been alerted and awareness campaigns have been undertaken —  all of this needs to be done by various departments of the state machinery. “In the absence of a nodal officer who can make sure that the various departments are working in tandem with each other, the impact of a good action plan gets watered down,” says Dr Mavalankar.

Challenges ahead
With the rise in global temperatures, a lot of countries in the world which were not heatwave-prone are facing extreme temperatures. At the beginning of this year, New Zealand and Australia sweltered in 46-degree temperature. The media told stories of how New Zealand had registered the hottest January in the country’s history, while in Australia, reports of how the sun was melting the asphalt on roads went viral. Unlike these nations, India, with a tropical climate, experiences heatwave every year. Therefore, for India the challenges are more diverse and not just limited to bringing down heat-related deaths —  the impact of climate change is being felt increasingly as the number of states/cities that earlier experienced heatwave days is rising, as is the maximum temperature recorded every summer.

There is overwhelming evidence to prove that the incidence of heatwave days in India has increased. A research paper published in December 2017, titled Heatwave exposure in India in current, 1.5 °C, and 2.0 °C worlds, warned that the country can see a 200-fold increase in heatwave exposure by 2100. Another study, titled Increasing probability of mortality during Indian heat waves published in June 2017, analysed the changes in summer temperatures, the frequency, severity, and duration of heat waves, and heat-related mortality in India between 1960 and 2009 using data from the IMD and found that mean temperatures across India have risen by more than 0.5 degree Celsius over this period, with statistically significant increases in heat waves.

Dr Mavalankar warns that going forward, what’s going to be of more concern is not the maximum temperatures reached during the day but such days being accompanied with warm nights. The efforts at the NDMA are now looking more and more towards finding long-term solutions. As Dr Thiruppugazh says, “The arguments laid down by climate change sceptics are not taken seriously. And now the effect (of climate change) is speaking for itself. Going forward, the NDMA is going to increase focus on designing buildings in a manner that provides insulation from heat, town planning and other long-term measures.” There is consensus on the fact amidst the various stakeholders that in the future, tackling India’s silent disaster is going to be tougher with climate change. But the only way forward, as NDMA’s Srivastava puts it, is to learn and unlearn and revise as we go.