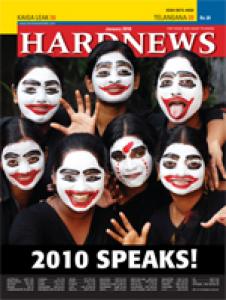 Iqbal’s poetry on his mind, a prayer on his lips, this gentle muezzin says give peace a chance
Sadiq Naqvi Delhi

Whose New Year is it anyway?

Gone with the Wind!

GOODBYE 2009. THIS IS NOT A NEW YEAR RESOLUTION. THIS IS THE BEGINNING OF ANOTHER EXTRAORDINARY LIFE OF HOPE, RESILIENCE AND FAITH
Amit Sengupta Delhi

A Man with Qualities

He is one of the most outspoken intellectuals today in Europe who is dismissed as too modern by the orthodox and too traditional by secularists. Meet Tariq Ramadan, 47, a cult figure with his good looks and gift of the gab
Mehru Jaffer Vienna

Health is not the only DISEASE

Nepal’s flourishing ‘76 million dollar-a-year’ AIDS industry aside, most young women were turning widows in a western mountain district with no clue as to how to fight this apocalypse. Until, a group of idealists arrived with the best in healthcare
Anil Bhattarai Toronto/Kathmandu

Desert fantasies: Why the gloom of doom haunts

As techno bureaucrats and rich kulaks get ready with their toasts to the rhetoric of irrigated farming, the ‘idea of the Indira Gandhi canal’ rolling on the chest of Thar, rehearses a tragedy
Rahul Ghai Bikaner

So I say, Thank you for the music.

It might be jazz but it will speak of us. We need not carry sitars and tablas. Meet the young new band of Indian musicians on the edgy threshold of sound and symphony
Ankita Chawla Delhi

An akhara of aspirations

Young wrestlers in the invisible margins, ignored by the sports establishment, prepare for another year of reckoning and recognition
Akash Bisht Delhi

Blowin’ in the wind

Obama has read the writing on the wall. The real outcome of the Copenhagen summit is the progressive devaluation of the EU and emergence of a new global architecture
Sanjay Kapoor Delhi

After the storm she has weathered for a large part of her life, she knows how vulnerable sex workers are and the stigma attached to them by the society. The indomitable spirit of Bharati Dey inspires her sisters in the profession
Rakhi Chakrabarty Kolkata/Delhi

The reformation of the self is the first step to independence, argued Gandhi in Hind Swaraj. In its centenary year, an exhibition takes this text as a reference point, and probes the ‘progress’ of India
Aritra Bhattacharya Mumbai

An Ode to Tiger Tiwari

Till the last count, golfer Tiger Woods had 13 mistresses in the US. Singer Jessica Simpson denied that she had anything to do with a Tiger who could not keep his paws to himself.

It is with a tinge of sadness that I bid farewell to 2009. It was one of the better years in my lifetime.

Even before the resolve to somewhat slow down in life was made public, the editors decided that there was no need for this reporter to cover the Copenhagen climate summit, live.

So, where have all the poor gone?

Prime Minister Manmohan Singh is proud of the political economy of liberalisation.

Flashback to the first Al Qaeda arrest, February, 1995: Pakistan's Federal Investigation Agency (FIA) picks up Ramzi Yousaf, the Kuwaiti-Pakistani accused of being behind the 1993 World Trade Centre car bomb that killed six people (the target was thousands). His arrest is credited among others to then FIA additional director Rehman Malik (currently, minister for the interior in the Pakistani government).